The temple dedicated to God Sun is situated in Arasavalli Village in the Srikakulam Town District headquarters of the North Coastal Andhra Pradesh. In India, there are two most ancient sun temples, and this temple is one of those. Sage Kasyapa is considered to have the idol installed, and hence Sun is of Kasyapasa Gotra and the king of planets.

Lord Devendra is known to be the builder of the temple where he installed the already existing idol of Sun lord.

The Legend Related to Temple Building 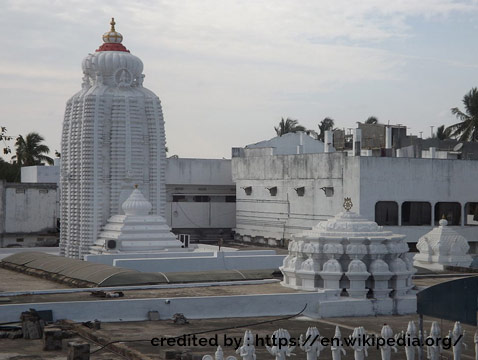 It is said that once Lord Devendra tried to enter the gate for having Darshan of Sri Rudrakoteswara Swamy. He did so even after Nandi’s attempt to stop him. That was the time when Lord Shiva was with his consort, and hence he told Nandi to ban anyone’s entry. When Lord Devendra was forcing to enter, Nandi got enraged, and he kicked and injured the Deva.

When the Deva was unconscious, he got a dream that he could get rid of the pain and injury if he builds and installs the temple of Lord Sun. When Indra got his consciousness back, he did what he dreamt, and this is how the temple is believed to have been built.

Following his dream, when Indra picked up a handful of Earth three times, he found the idol of Sun with his three consorts Usha, Chaya, and Padmini. There are also the figures of Dwarapalakas: Mathara and Pingala. Two divine saints are there, too, sanaka and sanadana. The idol of Sun is depicted as riding a chariot which is drawn by Anura. A finely polished granite stone is used to carve out all these figures.

The reports say that the temple dates back around the 7th century, when it is believed to be built by Devendra Varma, the Ruler of the Kalinga Kingdom. The translation of the inscriptions found also states the donation of lands to run a school or hostel for learning the shastras or Vedas.

Additionally, the temple is built in such a way that twice a year, sunrays fall on the foot of the God residing in the temple in March and September. These rays enter through five gates and stay there for a few minutes.

The worship of the Sun God is performed by everyone; people, regardless of their creed, culture, and other factors, can enter the temple and worship the Lord. This is truly a place that makes everyone believe that God is one for all.

The Five idols are installed in the temple. These are 1. Aditya 2. Ambika 3. Vishnu 4. Ganesha 5. Maheswara. After visiting all these idols, the devotees finally get the Darshan of Lord Sun in the temple, and they worship the Lord there.

Surya is the Lord who is the giver of shine and the rays that make life possible on Earth. He is the source of energy and induces life in every being. People who perform Surya Namaskaram receive good health and the grace of Surya, which makes them attain prosperity and status in society.

The Surya mantra is considered the most sacred in that its sound purifies the soul and protects one from all ill-effects in life.

Pushkarini is the pond that exists in the temple. It is believed that Indra dug the place with his “Vajrayudha” and found the pond. Many devotees take a dip in the pond and offer their prayers as doing so fulfills them with the grace of the Sun. Once they take the holy dip, they open their eyes to witness the Lord Sun in its full glory and mesmerizing appearance.

They witness the utter beauty of the Sun, which is studded with rare diamonds and having “Abhaya Mudra” in hands. Earrings studded with diamonds and eyes of the Lord full of compassion! It feels like his Darshan was the only thing a devotee wanted all his life.

After the initial build, the temple was then extended by the architect Viswakarma. Pingala and Mathara are established as the doorkeepers of this temple. Anura is set as the chariot driver, and thirteen angels cheer the Lord further.

There are sages like Sanaka and Sanandana who offer the Lord Vinjamara Seva and sing songs in the glory of God. The Indra himself blesses the Lord here, adding more significance to the temple.

The holy temple of the Lord Sun is believed to cure people of their ailments since Sun is the giver of good health. People who suffer from eye and skin diseases pay their homage to the temple and get benefitted from their discomfort. They believe that praying to Lord Sun by visiting the temple has the power to heal them from their sickness.

The detailed legend about the creation of the temple goes this way. As per the Dwaparayuga’s Purana, Balarama was chosen to be the incarnation of Lord Vishnu. Balarama hence bought the river Nagavali and created a temple also on the shores of the river.

The temple presided the Uma and Rudra Koteswara, for which all the lords came to pay their homage. Lord Indra, however, got late, and he reached there in the evening. This was the time when Lord Rudra was busy with his consort Uma. Mount Nandi, as a result, was said to prohibit the entry of anyone. When Lord Indra visited the door of Lord Rudra or Shiva, he expressed his wish to cross the entrance.

Nandi, however, stopped Indra from going any further; however, Indra was not ready to listen. Infuriated, Nandi kicked Indra and injured the Deva; Nandi’s kick sent Indra flowing in the air in the East side.

Indra, as a result, fell unconscious and in pain. He then offered his prayers to Lord Sun to relieve the pain. Sun then send his rays on Indra’s body, and he got healed. Indra instantly became grateful to Sun, and he asked Sun to stay with him there and forever; the temple was built out of Indra’s gratitude toward Sun.