Srikalahasti Temple is devoted to Lord Shiva, which lies in the Chittoor district in the South-Eastern state of Andhra Pradesh, India. This is one of the “Pancha Moorthy Stalam”, dedicated to the major five elements of the universe namely, Earth, Sky, Fire, Water, and Air. This is a “Vayu Stalam”, dedicated to the Lord Shivas’s incarnation as fire. This is one of the oldest temples in India and built during the Pallava Period. 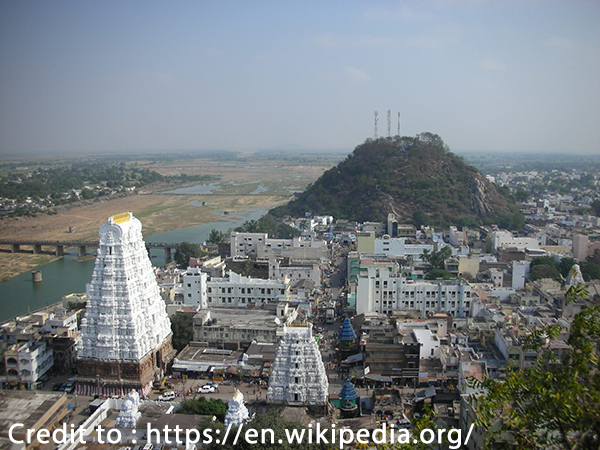 This temple has a splendid piece of history connected to it, which dates back to “Kretha Yuga”, the period connected to the early days of creation. Lord Vayu was penancing to "Karpoora lingam"(Camphor), for more than a thousand years. As Lord Shiva was highly pleased with Lord Vayu’s penance, he appeared before him and granted him three boons to reward his penance. Lord Vayu expressed his first wish to be present everywhere in this world. His second wish was to be a part of every human, which is the manifestation of God himself. Lord Vayu’s third wish was to name the lingam as Karpoora Linga, which represents Lord Shiva and Lord Vayu. Lord Shiva, known for his benevolence, immediately granted Lord Vayu his all three wishes.

There are several other legends, connected with this temple. Once Goddess Parvati was cursed by Lord Shiva to shed her heavenly body and take the human form and live in the Earth. Upon this curse, she was completely taken aback. She wanted to gain back her heavenly abode. She then meditated severely in this temple, where her curse was removed. Lord Shiva was extremely pleased with her deep devotion and had recreated her body, which was more than a hundred times better than her previous heavenly body. He also initiated various mantras like Panchakshari. Upon gaining her boon, Goddess Parvati was hence called as “Shiva-Gnanam”, “Gnana Prasunamba” or “Gnana Prasunambika Devi”, which means the repository of knowledge and wisdom.

Legends talks about “Ghanakala”, and how she became a ghost because of the curse, where meditated for almost 15 years in Sri Kalahasti. She was continuously chanting the Bhairava Mantra, upon which Lord Shiva restored her original form. Many people like Mayura, Chandra, and Devendra had also attained salvation from their curses after taking bath in the river Swarnamukhi and praying at Srikalahasti. Markandeya, a hardcore devotee of Lord Shiva was also enormously blessed with pristine youth and life.

Legendary stories also refer to Sri Kalahasti temple as a part of Kailasam. Once there was a feud between Vayu and Adishesha on the account of superiority. Adishesha then encircled the Kailasam. Vayu created twister to remove this encircle. Consequently, Because of the twister, the kailasam was shattered into eight different parts and fell into 8 different places which are Trincomalee, Srikalahasti, Thiruchiramalai, Thiruenkoimalai, Rajathagiri, Neerthagiri, Ratnagiri, and Suwethagiri Thirupangeeli.

The significance of Sri Kalahasti Temple:

Srikalahasti Temple belongs to the ancient Pallava period. This temple is highly significant, as people would resort to this temple to get their remedies for their malefic planetary position. This is considered as one of the prime shrines of Lord Shiva in the earth and believed to be blessed with benevolence. Lord Shiva is highly magnificent that he washes off the sins of his devotees, who worship this shrine with absolute faith.

The architecture of Sri Kalahasti Temple:

Srikalahasti is an excellent example of south Indian architecture. This is built by Pallava Kings. The other Pallava architecture is Mahabalipuram near Chennai. This temple has intricate carving and excellent architecture. The white stone Shiva Lingam of this temple resembles the shape of an elephant's trunk. The temple has two tanks, which are named as Chandra Pushkarani and Surya Pushkarani. Both are highly revered and are said to have divine powers. The main Tower or Gopuram of the temple is about 120 feet high.

This temple follows the Saivite tradition. The Maasi festival is celebrated with massive importance. Maha Shiva Ratri is one of the prime festivals. Vinayaka Chaturthi, Vijayadasami and Karthigai Deepam are celebrated with huge significance in this temple. During the transit of planets like Jupiter, Saturn, and Mars, special prayers are performed.

How to reach Sri Kalahasti Temple

Nearest Airport is in Tirupati, which is both a national and an international airport.

Srikalahasthi Railway Station is situated very near to the temple. Direct Trains to Srikalahasti are available from several towns.

Srikalahasthi Bus Station, is right in front of the temple. There is also good connectivity with various other towns. Other than buses, cars taxis and autos are also available.