This sacred Shaivite temple is dedicated to Shiva and lies in Thiruvalangadu, 17 kilometers away from Thiruvallur district, Tamil Nadu. 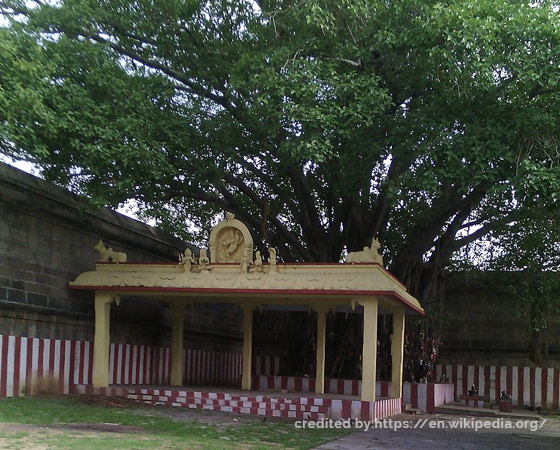 The village where the temple lies was earlier known as Pazhayanur, and the place where the temple is located was called Alangadu. The temple is very ancient and believed to have been built during the Chola and Pallava dynasties in the 12th century. Some inscriptions date back to the 5th century. The temple encases stone inscriptions dating back to the reign of King Paranthaka Chola I to the last ruler of Vijayanagaram.

According to a legend associated with this temple, two demons Sumban and Nisumban, worshipped Shiva to seek his blessings. Due to their intense penance, Shiva granted them a boon that every drop of their blood would become a Lingam. However, they started terrorizing the celestial beings, and hence the Gods asked Shiva to help them. Shiva asked Kali to manifest as Bhadra Kali to defeat the demons. She defeated the demons and drank their blood. As a result, she lost her mind and started terrorizing the celestial beings who sought help again from Shiva.

Shiva and Parvathi then decided to come to help Kali. However, Kali was not in her senses, and she started a fight with Shiva. Brahma, Vishnu, and Rishi Narada intervened and made them accept a dance competition, which was witnessed by Parvathi, Sage Narada, Sage Anantha, and serpent Karkodakar. Brahma and Mahavishnu provided music for their dance. Shiva performed 17 types of dances, and Kali repeated them. Finally, Shiva performed ‘Oordhuva Thandavam’ – a dance with swift movements. During the performance, Shiva dropped his right earring, and while standing on his right leg, picked up the ornament with the toe of his left foot and wore it again. As Kali could not repeat this movement, she admitted defeat.

Another legend has it that the region was once a dense forest of banyan trees and that the Swayambhu (self-manifested) lingam was found under a banyan tree. Later, people constructed a temple where the deity was called Sri Vadaranyeswarar (Vadam-banyan tree, Aranyam – forest and Eswar – Shiva) temple. It is believed that Devas worshipped Shiva here, and hence the presiding deity is called Sri Devarsingaperuman. Goddess Lakshmi, Murugan, and Saint Thirumular also worshipped Shiva here.

Saint Karaikkal Ammaiyar was an ardent devotee of Shiva and one of the 63 Nayanmars. Legend has it that she went to Mount Kailash, walking upside down on her head to see Shiva. This pleased Shiva, and he called her “Mother” (Amma in Tamil) and advised her to go to Thiruvalangadu to see his dance. She came to see Siva in this temple, but wherever she put her foot, a Shiva lingam started appearing. Hence out of respect, she decided to again walk upside down on her head. She witnessed the dance performance of Shiva and sung a hymn called “Mootha Thiru Pathigam” and attained salvation in the temple. Her final resting place was at the feet of Lord Natarajar.

Saint Thiru Gnanasambanthar wanted to visit the temple but hesitated to walk on the ground as Karaikkal Ammaiyar had walked on her head here. Not wanting to disrespect this aspect, he stayed in a neighboring village overnight without visiting the temple. God appeared in his dream, asking if he had forgotten to praise him. The next morning, he visited the temple and rendered a pathigam.

The Lingam in this temple is a Swayambumurthi (self-manifested) and faces east. The presiding deity is called Vadaranyeswarar (Lord of the jungle of the North)/Alavana Nathar/Alankatteesar and is represented by a Shiva Lingam. Natarajar is called Rathina Sabapathi Eswarar, and his consort Sivakami Sundari is called Sameesenambikai.

The main tower (Rajagopuram) has five tiers. The temple has three corridors (prakarams). The first prakaram has a huge hall for Annadhanam and Prasadams prepared at the temple. This leads to the Rajagopuram and the next prakaram. This prakaram entrance houses temples for Vallabha Vinayagar and Valli-Devasena Murugan.

The entrance to the second prakaram has Karaikkal Ammiyar on the left and Meenakshi Kalyanam on the right. The second prakaram houses the shrine of Vandar Kuzhali Amman, who faces south. A Yaga Salai is found near the Amman Sannidhi.

There are around sixty idols in the temple. The temple has a 100-pillar hall where priests perform Abishekam for Natarajar. There are two Shiva Lingams in the Natarajar shrine – one made of Spadigam (crystal) and the other made of Maragatham (emerald). Saint Karaikkal Ammaiyar’s Jeeva Samadhi can be seen at the end of Natarajar Sabha (hall). The idol of Mantheeswarar and the Lingam installed by him are seen in the temple.

The towers, as well as the walls surrounding the temple courtyards, are believed to have been constructed in the 12th and 13th centuries.

There is a 16-pillared Mandapam in front of the temple. The temple Ratham (Chariot) is aesthetically built like a beautiful lotus flower.

There is a separate temple for Goddess Bhadra Kali located one kilometer from the main temple.

The Sthala Vriksham of the main temple is the Banyan tree. The Theerthams associated with the temple are the Mukthi Theertham, Sentradu Theertham, and Siva Kara Theertham.

This temple is very auspicious as one can attain salvation here. There is a Parihara Sthalam for Bharani Nakshatram(star), and those born under this star can perform special poojas.

The temple is regarded as one of the Pancha Sthalas where Natarajar performed his cosmic dance, Oorthava/Kali Thandavam, and the hall where he performed this dance is called Rathina Sabhai (GemHall).

People wanting to master the art of dance can worship Sri Vadaranyeswarar here for his blessings.

How to Reach Sri Vadaranyeswarar Temple

The nearest airport is the Chennai Airport located 65 kilometers away.

Thiruvalangadu Railway Station is around 5 kilometers from the temple. Share autos are available from the railway station to the temple.

Thiruvalangadu Bus Stop lies 1 kilometer away from the temple.