The Sri Prasanna Venkata Narasimha Perumal Temple is an old temple that lies in West Saidapet in Chennai city. The temple is dedicated to Sri Venkateshwara. 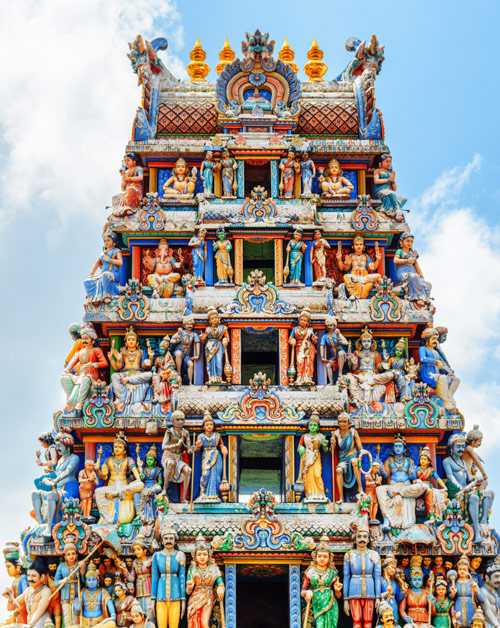 The Perumal temple underwent a renovation 700 years ago. The idols of mother Alarmel Mangai and the Panchaloka idol of Perumal were found while the people were digging a pit during the renovation of the temple. There was a specific group of people frequently traveling to Tirupati and Sholinghur to worship Venkatachalapathi and Narasimha. They installed the new-found idols and named them Prasanna Venkata Narasimha Perumal.

The temple was built in the 15th century A.D. by the Vijaya Nagara kings.

The temple faces the east with a beautiful five-tiered Rajagopuram. The Dwajasthambam, Balipedam, and Garudalwar sannidhis are immediately after the Rajagopuram. In the sanctum, the Moolavar (main deity) Venkatesa Perumal is in a standing position with Sridevi and Bhoodevi.

The Thala Vriksham of the temple is Shenbagam. To the south of the temple is the Pushkarni (holy tank). At the entrance on the southern side is the Madaipalli, where the Thaligai Prasadam (sacred food) for the God and Goddess is prepared. The Prasadam is distributed to everyone irrespective of caste or religion.

Devotees offer prayers and offerings at the temple to realize their wishes.

They perform Thirumanjanam to Perumal and Thayar and offer Vastras (clothes). Devotees throng the temple for the worship of Chakkarathazhwar. They believe that worshipping him on Wednesdays and Saturdays with Tulsi garlands is auspicious and that God will bless them and grant their wishes.

By worshipping the presiding deity, devotees can combine the worship of Sri Venkatachalapathi at Tirupati and Sri Narasimha in Sholinghur.

The temple celebrates the festivals of Narasimha Jayanthi, Sudarshana Jayanthi, and Sri Rama Navami in March-April, Chithirai Brahmmotsavam, in April-May, Krishna Jayanthi in August-September, and Purattasi Navaratri in September-October.

The Brahmmotsavam starts on Tamil New Year’s Day and lasts for ten days. The temple celebrates the event on a grand scale with special poojas, archanas, and processions daily. The flag hoisting takes place on Chithirai star day and ends on Thiruvonam star day.

The nearest airports are the Chennai National and International airports.

The suburban Saidapet Railway Station is about 1 kilometer from the temple.

The temple is close to the Saidapet Bus Terminus on the east and west side.