This temple is one among the 276 Devara Paadal Petra Shiva Sthalams. It is the 8th Shiva Sthalam on the southern banks of the Cauvery river in Chola Nadu. The deity – Lord Shiva – here is a Swayambumurthi or self-manifested. There are a few other Devara Paadal Petra Sthalams nearby, like Thiru Erumbiyur (Thiruverumbur), Mukkeecharam (Urayur), and Tiruchirapalli (Malaikottai). The sacredness of this Sthalam is comparable to that of Kashi. The Pathigam of this temple, rendered by Saint Thirugnanasambanthar, is very famous and is called “Idar Kalaiyum Pathigam” (which is loosely translated as “the Pathigam that gets rid of obstacles”). The temple faces east and has two corridors. Its Rajagopuram or main tower has five tiers. Maha Kumbabishekam was last conducted here on March 12, 2014. Before this, it was held on June 30, 1999. 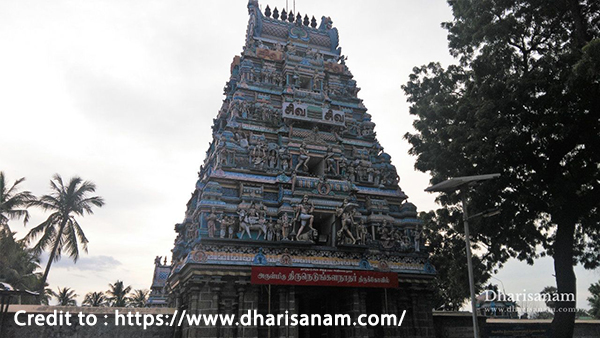 In Tamil, Thiru Nedungalam denotes ‘vast plains’. In Devaram, this place is described as ‘Nedungala Maanagar’, and it means that it was once a large city in ancient times. But now it is just a small village. Another name for this place is Southern or Dakshina Kailash. Stone inscriptions seen here go back to the time of the Chola kings, Parakesari Varman, Rajaraja Cholan, Rajarajan II, Kulothungan III, and Aditya Karikalan II. Some others go back to the era of the Pandya, Hoysala, and Vijayanagara kingdoms. The deity here has many names – Nedungalathu Mahadevar, Nedungalanatha Swamy, Nedungalathu Nayanar, Kalanthai Nayakar, Sundaramurthy, and Kayilayathu Mahadevar. The temple is run by the Hindu Religious and Charitable Endowments Department (HR&CE) of the Tamil Nadu government.

Lord Shiva here is depicted as Ardhanareeswarar. In this form, he represents the synergy between Lord Shiva and his consort, Goddess Parvati. Legend says that the Lord in this temple sits not in the center of the sanctum, but slightly away from it so that Parvati can sit near him. There is no idol for the Goddess inside the sanctum, but it is believed that she is present there as “Aroopam” or “the formless one”. On account of this, two towers or Vimanams can be seen on the sanctum sanctorum. A similar structure can be seen only in Kashi.

The story goes that when Parvati was performing penance here, Lord Shiva came in the guise of a dacoit to play a prank on her. The scared Goddess hid in a garden of ‘Thazhai’ plants. The place where she hid was called ‘Olimadhi Cholai’. Later, Lord Shiva revealed himself, and they returned to Mount Kailas. This place, Olimadhi Cholai, can still be seen nearby.

People believe that a well was created here by Sage Agasthiyar, who also installed a lingam and worshipped Lord Shiva at this place. Another account has it that Shiva granted darshan to the Chola king, Vankiya Cholan, of his wedding. So the Lord here is revered as Nithya Sundareswarar.

Apart from the Shiva and Parvati shrines, there are shrines and idols for many deities. They include Muruga and his consorts, Valampuri Vinayakar, Varadaraja Perumal with his consorts, Sridevi and Bhoodevi, Appu Lingam, Jyeshta Devi, Vayu Lingam, Ayyanar, Koppu Lingam, Sapthamadakkal, Suryan, Chandran, Navagrahas, Bhairavar, Kala Bhairavar, and Nalvar with Sekkizhar. These can be seen in the temple corridors.

At this temple, Saint Thirugnanasambanthar rendered his famous Pathigam, ‘Idar Kalayum Pathigam’. It is believed that offering pomegranates to the Lord here is very auspicious. The fruit is used for Abishekams as well. Saint Ayyadigal Kadavarkon praised the temple’s Lord in his ‘Kshethra Thiruvenba’. He was one of the 63 Nayanmars, and it is said that he lived before the two saints, Thirugnanasambanthar and Thirunavukkarasar, also called Appar. Lord Yoga Dakshinamoorthy’s idol found here is beautiful and has a unique posture.

It is said that Lord Suryan’s rays fall on the Lingam here every year for 6 days, in the month of Aadi (mid July-mid August). This is from the 7th to the 12th of Aadi month. In this way, Suryan worships Lord Shiva here. Sapthamadakkal are seen in the corridors in two places. While they are depicted as separate idols in one place, in the other, they are seen in the form of beautiful engravings on a granite slab. The Agasthiyar Theertham here supposedly never goes dry. Suryan faces west in the temple’s Navagraham, and his two wives are also present. The other planets face Suryan.

In his famous Thiruppugazh, Saint Arunagirinathar has sung songs praising Lord Murugan, who is worshipped here. An artistic stone grinder, called ‘Sirpa Ural’ belonging to the Chola period, can be seen here. It is believed that recitation of the Idar Kalayum Pathigam can remove various obstacles faced by devotees. Praying to the Lord here can also bestow progeny, goes the belief. People who are facing obstacles to marriage, offer turmeric powder, ground in the stone ural (grinder) here, to Goddess Varahi, who is one among the Sapthamadakkal.

Many festivals are celebrated in this temple. Some of the important ones are: