Varaha Lakshmi Narasimha Temple or Simhachalam Temple is located on Simhachalam hill, in the city of Visakhapatnam, Andhra Pradesh. The temple is located almost 300 meters above sea level. The temple is dedicated to Lord Varaha Narasimha, one of the incarnations of Lord Vishnu, and His consort is Goddess Simhavalli Thayar. This is one of the 32 Narasimha temples in Andra Pradesh and was a prominent center since time immemorial. 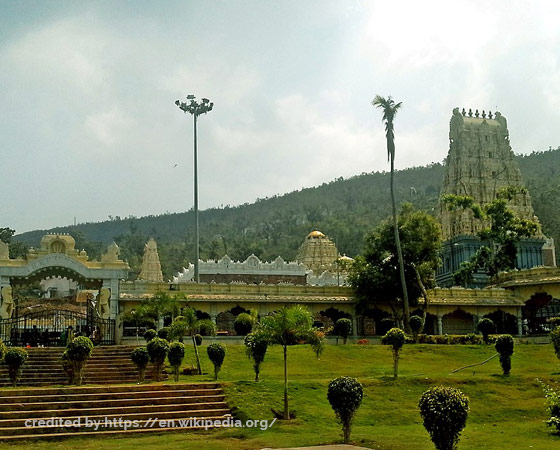 Two demon brothers, King Hiranakashyap and King Hiranyaksha were born to Sage Diti. The demon brothers did severe penances and pleased Lord Brahma to grant the boon. Once became invincible, their atrocities began to increase day by day, and they troubled the people across all three worlds. Hiranyaksha wanted all his subjects, and even his son Prahalad also chant his name, and to worship him. But, being an ardent devotee of Lord Vishnu, Prahalad refused to chant his father’s name and considered only Lord Vishnu as the supreme deity. Furious Hiranyaksha troubled his son in different ways. He also tried to kill his son. It is believed that Lord Vishnu himself came in the incarnation of Narasimha, and saved Prahalad. Thus to pay his tribute, Prahalad built a massive temple for Lord Narasimha in the town of Visakhapatnam.

The architecture of Simhachalam Temple:

Simhachalam Temple looks like a fortress when looked from outside. There are three prakaras, or outer courtyards, and five gateways. The temple is built by Narasimhadeva I, with the mix of the styles of Orissan, Chalukyas and the Cholas architecture. The temple has five-tier raja gopuram. The temple also various halls, which are supported by pillars and has magnificent carvings, which reflects the great workmanship. They are used to conduct cultural programs, festivals, celestial weddings between Gods and Goddesses. The sanctum sanctorum reflects the Hoysala style. Lord Narasimha, inside the sanctum sanctorum, is smeared with sandalwood paste, which has been brought from Srivilliputhur. The Vimana, the roof of the sanctum sanctorum is three-tiered, which is similar to Konark temple. There are separate shrines for Goddess Lakshmi, Andal, and Azhwars.

The festivals celebrated in this temple belongs to Dravida Sampradaya, which is very similar to TamilNadu. Kalyanotsava, or the celestial marriage and Chandanotsava, the sandalwood festival is prominent. Other than that, Deepavali, Sri Ram Navami, Krishna Jayanti, and Ugadi are prominent festivals.

Having located in the salubrious environment is filled with rich vegetation, which makes the devotees have a magnificent darshan. There is a “Kappam Stambham”, a pillar installed in this temple that has curative powers. People with health challenges, and looking for growth and development visit this temple. “Santana Venugopalaswamy Yantra”, installed inside the temple has the power to fulfill wishes.

The morning session of this temple commences at 7.00 am and closes around 4.00 pm. The evening session starts around 6.00 pm, and the temple closes at 9.00 Pm every day.

How to reach Simhachalam Temple:

Visakhapatnam airport is the nearest to the temple. This airport is both National and International airport, with good connectivity across Cities inside India and Abroad.

Visakhapatnam Railway Station is one of the important junctions of India Railways and has several trains which stop in this station, offering service to a large number of people.

Dwarka Bus Stand is very close to the temple premises. The city of Vishakapatnam is well connected with various cities and has good bus facilities round the clock. There are also several other local means of transport like autos, taxis, and private cabs.