Saundatti Yellamma Temple is dedicated to Goddess Parvathy. It is situated around 5 Km from Saundatti town, Belgaum district, Karnataka. This temple is dedicated to Goddess Yellama, which means “Mother of Universe”. Goddess Yellama is also called as Goddess Renuka or Goddess Jaggadamba. This is one of the most revered temples of Karnataka, where many devotees would come to pay their respect. This temple has witnessed several miracles, and devotees have the firm belief they would get relief from different afflictions. 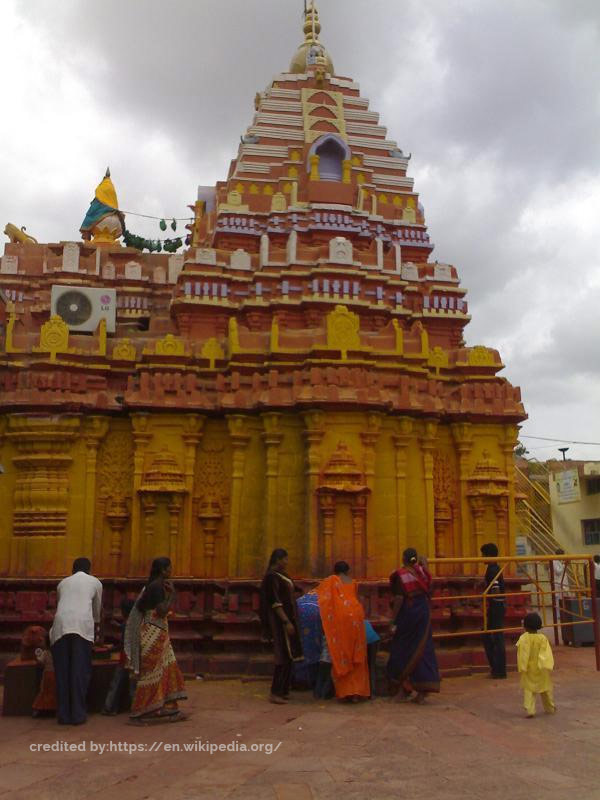 The legend of Goddess Yellama is an interesting one. Renuka was the wife of Sage Jamadagni, and they had five sons, and Parashurama was one among them. He was considered the incarnation of Vishnu. Due to a feud, Sage Jamadagniasked asked his son to behead Renuka. Parashurama obeyed his father’s words, and he also beheaded one more woman who came to protect his mother.

Parashurama complied with his father’s words, as to quench the anger of his father, which otherwise would not be brought under control. It is important to note that Parashurama also beheaded his brothers, who refused to decapitate their mother. When the Sage Jamadagni’s anger was over, Parashurama requested him to bring back his mother and brothers to life. Sage Jamadagni accepted the request and found that the body and head of two women got interchanged. Sage Jamadagni, accepted the lady, with the body of his wife and the head of another woman. Later, the head of Renuka became the Goddess Yellamma.

The architecture of Saundatti Yellamma Temple:

The temple is built in the Chalukya and Rashtrakuta Style of architecture and is one of the oldest temples of Karnataka. It has been renovated several times. The idol was found 10 feet in the ground, and around this, a huge temple was built. The temple has a big temple tower or Raja Gopuram. There are several inscriptions and carvings on the wall. The other shrines inside the complexes are Lord Shiva, Lord Mallikarjun, Goddess Nagaraja, and Lord Ganesha.

There are several festivals celebrated in this temple. Banada Hunnime and Bharathi Hunnime are important festivals. The Jatre is a festival dedicated to the Devadasi system. During this festival, the Goddess Yellama is taken out in a procession. Other than this, Navaratri, Deepavali, Ugadi, Telugu Newyear, and Makar Sankranthi are some of the festivals celebrated with high reverence.

Goddess Yellama is highly benevolent. She blesses her devotees and grants them a life free from obstacles. She helps them gain progress in life. Many people also believe that she protects their life like an amulet. They feel that the deity is their guarding angel and a talisman against negative forces that invade their life. She bestows good health, a healthy mind, and confidence to all who surrender to her.

The gates of the shrine are open to the public from 5 am to 9 pm on all days of the week.

How to reach Saundatti Yellamma Temple

Airports at Hubli and Belgaum, are the nearest to this temple. It is advisable to resort to roadways from the temple.

The Nearest railway station close to the temple is Dharwad Railway Station.

KSRTC connects the town of Saundatti, with major cities of Karnataka. Other than busses, there are private cabs and autos.