The temple is the fifth shrine in Thondaimandalam region and one among the 275 Paadal Petra Sthalams, praised in Thevaram, the 7th-century religious work in Tamil, written by Tamil saint- poets known as the Nayanars.

The temple also called Karaivananathar Temple or Thirukalimedu temple. The place is also known as Indiresam and Satyavratam. The temple is run by the Hindu Religious and Endowment Board of the Government of Tamil Nadu.

There is a path opposite the Head Post Office that leads to the temple and is called Thirukalimedu. Many years ago, people used this path to reach Kanchipuram. Since there are many prickly plants along this path, the place came to be called by the name Kachinerikkaraikkadu. 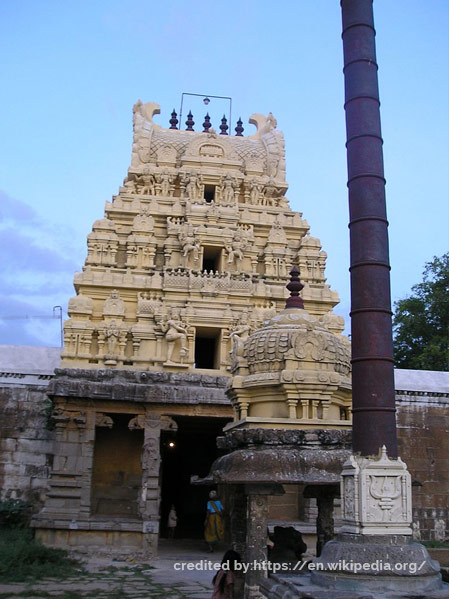 Legend says that Indra, the king of the Devas, and Budhan (Mercury) worshipped Shiva at this place. It lies in a forest called Kaaraivanam. Because of this, the presiding deity came to be called Karaivananathar (Sathyanatheswarar).

According to Hindu mythology, the moon or Chandra was under the tutelage of Jupiter or Guru. He wanted to marry Guru's wife, Dhara. So, he performed a yagna seeking a boon from Vishnu. Guru took part in the function along with Dhara. She became attracted to Chandra, and the two had a relationship due to which, Budha was born. As a youth, Budha came to know of the circumstances behind his birth and felt disturbed. He performed penance to Shiva as he wanted to become one of the Navagrahas here. Pleased by his devotion, Shiva came to him as Sathyanatheswarar and granted the boon.

Another legend says that Indra, the king of the Devas, was attracted to Ahalya, the wife of a sage called Gautama. Turning himself into a rooster, Indra woke the sage early in the morning. The sage went to the river, leaving Ahalya behind in the hermitage. Indra entered the house to attain Ahalya, but the sage returned suddenly, sensing something wrong. When he reached the hermitage, he saw Indra escaping in the guise of a cat. The sage became furious and cursed Indra to bear a thousand vulvae all over his body that would turn to eyes when he worshipped the Sun God, Surya. Indra began doing penance to Shiva, to regain his normal appearance. He saw Shiva among the Karai bushes in this place and worshipped him. Thus, he got relief from the curse. The God here came to be called Karai Thirunathar following this incident.

The temple is in Thirukalimedu in Kanchipuram and encompasses 22,500 square feet. Sathyanatheswarar temple complex has two outer courtyards or prakarams (corridors) and a three-tiered Rajagopuram (gateway tower) 50 feet high and facing west. The central shrine is east-facing, and the idol of Sathyanatheswarar (Shiva) in it is in the form of a granite Lingam that is believed to be self-manifested or a Swayambumurthy.

The temple has a granite wall that encloses all the shrines.

Goddess Parvati has no separate shrine here, as Goddess Kamakshi of Kanchipuram is believed to be the common Parvati shrine for all the Shiva temples. A shrine facing the south houses the festival image of Pramarambikai. Granite idols of Nandi (the vehicle of Shiva), a tall flagstaff, and the place of offering, or Balipeeta, are axial to the sanctum.

The walls around the sanctum of Sathyanatheswarar’s sanctum (first precinct) have images of Sri Dakshinamurthy (Shiva as Teacher) and Goddess Durga (warrior-goddess), and, also of Chandikeswarar, a saint and Shiva devotee. Due to the historical significance of the temple, it was proposed by the Archaeological Survey of India, Chennai Circle, to be considered as an archaeological monument - only one of seven temples to be conferred the honor. It also has a lotus tank.

Shiva faces west as a Swayambhumurthy. A 7th-century Tamil poet (of the Saivite sect), called Thirugnana Sambandhar, venerated Sathyanatheswarar in a verse in Tevaram. Hence, the temple is classified as Paadal Petra Sthalam, one of the 275 such temples found in India.

The Mother Goddess is known as Karakuzhali. In this temple, the neck of Nandi, the Bull, is turned south. Buddha (Mercury) is seen gracing the prakaram (corridor) to the south of the deity. It is widely believed that the Shiva Lingam absorbs sesame oil offered during pooja.

Devotees take a holy dip in the temple tank and offer worship. They are blessed with benefits.

Pooja rituals are performed by temple priests daily, and also during festivals. The temple has two daily rituals - from 05:30 a.m. to 08.00 p.m. Each ritual has four steps: hydration or Abisheka, decoration or Alangaram, the offering of food or Naivethanam, and waving of lamps or Deepa Aradhana. The rituals are done for both Sathyanatheswarar and Pramarambikai Amman. Weekly rituals like Somavaram (Monday), Sukravaram (Friday), Pradosham (fortnightly rituals), and monthly festivals like Amavasai (new moon day), Krithigai, Pournami (full moon day) and Chaturthi, are also observed here.

This temple is also a Parihara Sthala for Budha or Mercury afflictions. On Wednesdays, after taking a holy dip in the Theertham or temple tank outside the temple, devotees worship planet Budha with green pulses or green-colored clothes. This is believed to appease the planet, which is worshipped as Gnana Karaka or the Wisdom-giver. People worship him for intelligence, eloquence, good language skills, and excellence in education.

Many festivals are celebrated at the temple. They include the Margazhi Tiruvathirai in the month of Margazhi (December - January), Aippasi Annabishekam in Aippasi month (October – November), and Maha Shivaratri in February- March.

Chennai International Airport is the nearest airport to the temple.

Kanchipuram Railway Station is the nearest railway station to the temple.

The Temple is 2 kilometers away from Kanchipuram Bus Stand.