The Samayapuram Mariamman Temple dedicated to Goddess Shakti lies in Samayapuram, near Tiruchirapalli district of Tamil Nadu. Mariamman is a manifestation of the ancient energy of Durga, Maha Kali, or Adi Shakti, the Mother Goddess. The temple is among the most famous shrines of Goddess Shakti in Tamil Nadu. They make the deity from a mixture of sand and clay, like most Mariamman deities.

History of the Samayapuram Mariamman Temple 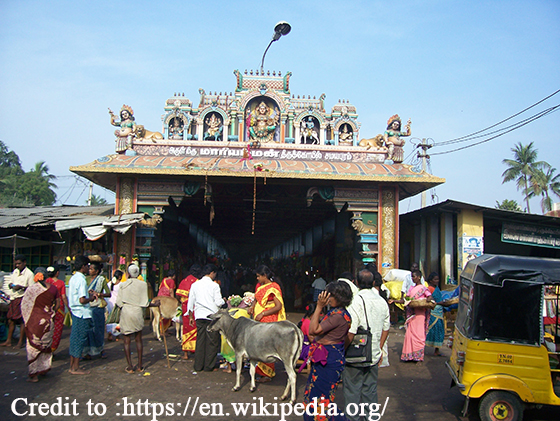 According to legend, the present deity in the temple was at the Ranganathaswamy temple in Srirangam. One of the main priests at the temple complained that the idol caused him to fall ill and ordered that the deity be removed from the premises. They moved the idol outside Srirangam, and a passer-by built a temple, the Kannur Mariamman Temple.

Around the 17th century CE, the Vijayanagar kings ruled Tiruchirapalli and used the region as an army base. They committed to build a temple if they won the war. After the victory, they constructed a shrine for the Goddess. Many believe that the locals worshipped the Goddess for centuries before building the current temple.

Significance of the Samayapuram Mariamman Temple

The Samayapuram Mariamman temple is a symbol of the native culture, and there are many traditions and customs unique to the Mariamman temples. The temple has the unique feature of Samiyattam, wherein Goddess Mariamman chooses to speak through a devotee to help and bless the devotees. The Holy days for the deity are Sundays, Tuesdays, and Fridays, when thousands of devotees flock to the temple. Popular belief has it that Samayapuram Mariamman protects her devotees and has tremendous powers to cure illness. Devotees make it a ritual to buy metallic replicas of various body parts, made of silver or steel, and put them in the donation boxes. Another belief of the devotees is to offer Maavilakku (a lamp made of rice flour, jaggery, and ghee). Those suffering from measles come here and stay until they recover. When they return home, they leave their soul and mind behind. They also make offerings of rock salt to the Goddess.

Goddess Mariamman fulfills any aspiration of her devotees. Those cured after smallpox, stay behind and serve the temple before leaving it. The Teertham (holy water) is sprinkled on them, after which they make a quick recovery. There is a separate resting hall during their stay in the temple. Devotees with disabilities and impaired vision offer prayers to the Goddess. Diseases vanish without performing surgery. Devotees offer thanksgiving in the form of tonsuring, Archanas (pooja), and Abishekam (sacred washing). They perform the ear-piercing ritual too.

The devotees choose to go through excruciating rituals causing suffering to their bodies as an act of sacrifice. They walk on a bed of red -hot coals and hold hot mud vessels with their bare hands. They carry fire pots, pull golden chariots, punch their faces, offer cradles made of sugar cane, do Angapradakshinam (rolling on the floor around the temple's outer sanctum). As thanksgiving, the devotees also donate food grains, paddy, sheep, and chicken. They undertake to feed the poor, too. Many women offer their Thali (mangal sutra) by dropping it in the hundi (donation box).

Unlike most Hindu deities, the priests do not perform Abishekam (sacred washing) for the deity. Instead, they conduct the Abishekam for the small stone idol in front of the deity.

Samayapuram's legacy has spread across the country and to other parts of the world. People who migrated to Sri Lanka, South Africa, Singapore, and Fiji still maintain their loyalty to the temple and have built similar temples in their part of the world.

The Thai Poosam festival is celebrated in full grandeur in the temple for 11 days. The deity of Goddess Mariamman is taken in procession during morning and evening in different Vahanams (vehicles). On the tenth day, on Thai Poosam, the deity is taken in a procession from Samayapuram to north Cauvery near Srirangam in a glass palanquin for Theerthavari (taking a bath), where Sriranganathan honors Goddess Mariamman by presenting Seer Varisai (gifts) to his sister Mariamman. She returns on the eleventh day to Samayapuram. The devotees light lamps made of flour and ghee for 15 days during the Thai Poosam festival (January-February).

The temple celebrates the Poochoriyal Festival in the month of Maasi. In this ritual, beautiful flowers are showered on the Moolavar deity. The festival takes place across four weeks. Goddess Mariamman undertakes a hunger fast on the last Sunday of Maasi for 28 days, for the welfare of all beings around the world. There are no solid food offerings to the Goddess during this period, only offerings in liquid form.

The Chithirai Ther (chariot) festival takes place in the Chithirai-Panguni months. During the festival, the Goddess rides a wooden chariot and goes for a ride on the Theppam(float).

The Panchaprakaram is celebrated in the months of Chithirai-Vaikasi for 15 days. On the first and tenth day, Maha Abishekam takes place. The temple celebrates the Navaratri festival in the month of Purattasi, from Mahalaya Ammavasai till the ninth day. The deity sits in the Navaratri Mandapam for Golu.

How to Reach Samayapuram Mariamman Temple

The nearest airport is Tiruchirappalli Airport.

The nearest railway station is located at Tiruchirappalli.

There is good connectivity by road as buses and taxis ply, making it convenient for the devotees to reach the temple.