The temple at Punnainallur is dedicated to Goddess Mariamman. The temple lies six miles away from the city of Thanjavur, Tamil Nadu, and is a famous temple. Goddess Mariamman is a manifestation of Goddess Shakti, and she is also known as Muthu Mariamman as drops of moisture (resembling pearls) appear on the face and forehead of the granite idol during summer months. The deity is self-manifested. 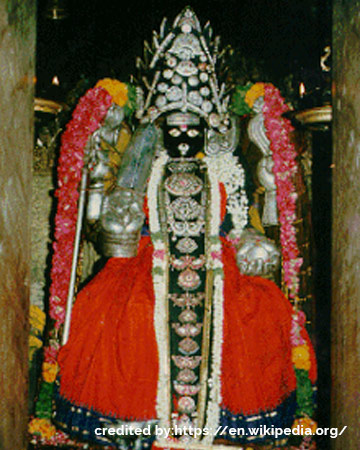 According to the Sthala Purana, Shiva fought a battle with the Asura Tanja of Tanjore (Thanjavur). It is believed that Shiva established the Ashta Shaktis (eight powers) in eight directions, and the one located in the east is the presiding deity of the temple. The Goddess is called Punnainallur Mariamman.

Maratha King Venkoji Maharaja Chatrapathi (1676-1688) was an ardent devotee of Goddess Mariamman. In 1680, he decided to visit the Goddess Samayapuram Mariamman in Tiruchirapalli. En route, he took rest under the shade of a tree when Goddess Mariamman appeared in his dream and said he could find her in a forest of Punnai trees, around three miles away from Thanjavur. The Maratha king rushed to the spot and saw a Puttru (white anthill). The Amman was in the form of the anthill.

A great saint Sadashiva Brahmendrar Swamy shaped the Puttru into the form of Mariamman and installed a powerful Sri Chakra here. King Venkoji Chatrapathi built the Punnainallur Mariamman temple on this anthill.

The Maratha rulers worshipped at this temple, and King Thulaja and King Serfoji used to offer worship to the Goddess here. Once, the daughter of King Thulaja of Thanjavur lost her eyesight due to an illness. She visited the temple and offered worship to the Goddess Mariamman and regained her vision. The Mariamman temple is maintained by the descendants of the royal family of Thanjavur.

The temple is a pure example of the Dravidian style of architecture. It represents the ideals of the Chola dynasty and echoes the culture of the Tamil civilization of South India. The kings of Thanjavur took a deep interest and were involved in the construction of the temple by adding gopurams, mandapams, and other structures, including entrances to the temple.

In the initial part of the eighteenth century, it is believed King Thulaja (1729-1735) constructed a small temple with a single prakaram (corridor) for Goddess Ambika, where the anthill was located. King Sarabhoji II Bhonsle constructed the Maha Mandapam, the Narthana Mandapam, the front temple tower, and the second prakaram between 1798 A.D. and 1832 A.D. In later years, the rulers constructed a third prakaram and outer walls.

The main entrance to the temple features a recently built seven-tiered Rajagopuram (temple tower). The Bali Peetam (platform for food offerings) and the Dwajasthambam (flagstaff) can be seen in the first prakaram. There are also Naga deities (snake Gods) and a Vasantha Mandapam.

The temple houses other deities, including Vinayakar and his brother Subramanya in their shrines. There is an image of the Sage Sadashiva Brahmendrar inside the main temple. The left of the main sanctum has a shrine for Pechchi Amman, a form of Mother Parvati (Rajarajeshwari) and also a village Goddess.

The Sthala Vriksham is the Neem tree. The Theertham associated with the temple is the Vella Kulam.

The Goddess is seen in this temple in a considerate and mesmerizing form. Her idol is coated with Punnugu, an oily and aromatic paste made from the secretion of the civet cat.

The Goddess is adorned in a golden pleated skirt and blouse on specific days. Since the Sage Sadashiva Brahmendrar Swamy installed the sacred symbol called Sri Chakram and molded the idol of Goddess Mariamman over the anthill, there is no Abishekam performed to the idol.

Abishekam is performed to the Utsavar Murthy (processional deity) called Vishnu Durga near the sanctum. A strange phenomenon is that in summer months, one can see drops of perspiration forming on the face and forehead of the Goddess. Priests fill water around the area of the idol to stave off the heat in the sanctum. The sweat drops disappear of their own. The Goddess is hence called Muthu Mariamman.

Devotees place mud replicas of human body parts as an offering and pray for cures. Goddess Mariamman cures and heals her devotees of all physical ailments.

Goddess Pechchi Amman gives protection and removes imaginary fears of children. She offers protection to children who cry in fear of seeing imaginary things. She removes the fears once prayers are sincerely offered.

They pray for relief from measles, chickenpox, and skin sores. Devotees offer prayers for one week at the temple to be cured of an illness. Devotees consume milk offered for the four poojas performed to the Goddess every day and they are cured of the ailments.

Brahmotsavam takes place in the month of Aadi-Avani (August -September). This is the main festival celebrated in the temple where there is a procession of Goddess Muthu Mariamman taken in a beautifully decorated pearl palanquin. The Chariot festival takes place on the last Sunday of Avani (August-September).

The temple celebrates the Floating Festival (Theppam) every year in the holy tank in the Tamil month of Purattasi that falls in September-October. The Goddess is carried in a float across the sacred tank, and the float is brightly decorated with lamps.

Sundays are considered very auspicious for offering worship to the Goddess. Womenfolk and children offer prayers at the temple. Fridays are considered special, especially in the month of the Tamil month of Aadi (July-August). Devotees visit the temple in large numbers in the months of August-September, considered to be very auspicious for the Goddess. Navaratri and Maha Shivaratri are the other famous festivals celebrated in this temple.

Once in five years, the temple performs Thailabishekam (Punnugu application), which is performed for 48 days over the anthill. Devotees are not allowed to see the Goddess during this ritual period. They can only view an image of Goddess Mariamman featured on a curtain drawn in front of her idol. The powers of the Goddess increase manifold during this period. She is offered curds and coconut water to diminish the heat and make her cool down.

How to Reach Punnainallur Mariamman Temple

The nearest airport is the Tiruchirappalli Airport, which is 64.5 kilometers away from the temple.

The railway station nearest to the temple is the Thanjavur Railway Station, which lies 6.1 kilometers from the temple.

Thanjavur Old Bus Stand is the closest to the temple at 6.7 kilometers.