The Gunaseelam Prasanna Venkatachalapathy Temple is located 20 kilometers from Tiruchirapalli, a state in South India. The temple is dedicated to Vishnu and situated on the banks of the river Kollidam. The name Gunaseelam translates into Gunam (cure/quality) and Seelam (place/lower position). Gunaseelam means a location where Vishnu descends from heaven to address the problems of his devotees. Venkatachalapathy is the presiding deity in the temple.

The temple, situated atop a hill called Perumalmalai, is 960 feet above ground-level in the Pachaimalai hills. The temple has 1,532 steps. There is a 5 -kilometer motorable roadway till the top. 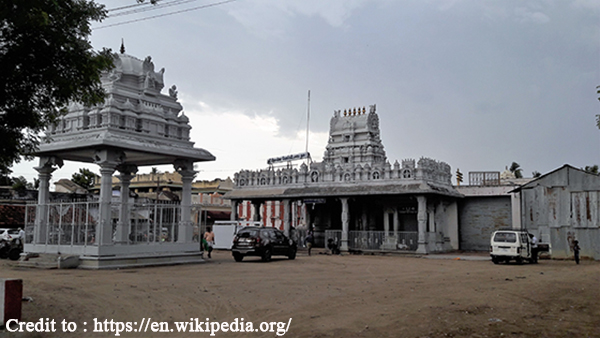 The temple is referred to in the Gunaseela Mahaatmiyam in the Bhavishyotra Puranas. Gunaseela Rishi returned from the Himalayas and visited Tirupati. He was so impressed with Venkatachalapathy that he started a severe penance in his ashram and wanted God’s presence in Gunaseelam. Venkatachalapathy appeared in his vision, along with the Goddess, and promised to stay till the end of Kali Yugam. One day, Gunaseelam Maharishi was called away and asked his disciples to carry on the poojas. However, natural disasters made it impossible, and the presence of wild animals created fear among the disciples, who fled the region. A pit, an anthill, covered Venkatachapalathy.

Years later, Chola King Nyana Varma began to visit Gunaseelam regularly. Local cowherds milked their cows near the pit and carried it to the court. One day, the milk up to the brim of the pot disappeared, shocking all present. God’s voice instructed the king to dissolve the pit by pouring milk into it, which the king carried out.

Venkatachalapathy appeared before the Chola king as Prasanna Venkatesan and promised to stay till the end of Kali Yugam and fulfill the prayers of the devotees. King Nyana Varma shifted his capital to Kollur near Gunaseelam and built the beautiful Gunaseelam Prasanna Venkatachalapathy temple. He gave a lot of land and funds so that the temple could function smoothly.

The temple has the power to cure the ailments of mentally challenged people who are kept in the temple for 48 days. Those who are mentally challenged and suffer from depression visit this temple seeking relief. The prayers offered to the presiding deity cure the patients. There is a mental health rehabilitation center that is licensed by the Government of Tamil Nadu. The temple has this facility, the first of its kind in the country.

The center has individual rooms and washrooms. A psychiatrist visits the center every week, and volunteers care for the mentally challenged. On certain days, sacred water is splashed on the patients, during Uchi Kaalam (noon) and Artha Jaamam (night) for 48 days, to rid them of disease and evil influences. A cure is possible if they offer sincere prayers to the deity. The physically challenged also visit this temple to offer prayers for their healing. People unable to go to Tirupati visit Gunaseelam, to have their wishes fulfilled.

The architecture of the temple has changed from a century ago, and now hereditary temple trustees have used modern architecture. The flooring has modern flooring, with photographs and new paintings adorning the temple walls. The central shrine of the temple holds the presiding deity, Prasanna Venkatachalapathy, in a standing posture with four hands – one carrying the Abhaya Mudra, and the other hands holding the Gadha (mace), Conch, and the Chakra (wheel).

The temple has a shrine for Vinasagar, the founder of Vaikanasa Aagamam, wherein Venkateswara himself gave him Brahminhood alongside the God of Creation, Brahma. The temple has other sanctums for Narasimha, Navaneetha Krishna, Sridevi, Bhoodevi, and Varaha. Above the central shrine stands the Trinetra Vimana, in three tiers, where Narasimha is on the Garuda Vahana with the Shanka (conch) and Chakra (wheel).

The temple celebrates the Float festival called the Chithirai Theppotsavam festival during the Tamil month of Chithirai between March and April. In the month of Aavani, the temple observes the Pavitrotsavam festival, which occurs for three days. Most Vishnu temples have the Thirumanjanam (ablution) performed once a week. However, the Gunaseelam Prasanna Venkatachalapathy Temple is the only one where the authorities performThirumanjanam (ablution) daily for the central deity.

Blessings and Benefits of the Gunaseelam Prasanna Venkatachalapathy Temple

The presiding deity Prasanna Venkatachalapathy is benevolent, and people who visit the temple with ailments can use the facilities (including accommodation) offered by the temple trustee, for 48 days. Volunteers care for the patients offering prayers to the deity who answers them.

Ailments afflict humans, and many people thus affected hope for divine intervention to have their health restored. Devotees have the opportunity to avail of this facility intended for those who are afflicted with mental and physical ailments. People get cured after offering sincere prayers to the deity Prasanna Venkatachalapathy. The Gunaseelam Prasanna Venkatachalapathy is the only temple offering this particular facility for the benefit of the people.

The nearest airport is the international airport at Tiruchirapalli, located 30 kilometers away.

Tiruchirapalli is well connected to all parts of the country by rail. Trains travel on a daily basis to Trichy.

Tiruchirapalli is well-connected by buses to various parts of Tamil Nadu and the main cities of Andhra Pradesh, Kerala, and Karnataka.