Pazhamudircholai is situated 19 kilometers from the temple town of Madurai. Lush hills and forests surround the place. This hill is also called Vrishabhadri or Idabagiri. Pazhamudircholai is mentioned as the sixth of Murugan’s Aru Padai Veedukal (six holiest Murugan shrines) as described by Sangham poet Nakkeerar in Tirumurukarruppatai. Though the sthala is ancient in origin, the temple in existence today was constructed only recently. Muruga’s Vel has been worshipped as the moolavar (main deity). The idol of Muruga (Jnana Shakti) in a standing posture has a single face and four hands with Valli (Iccha Shakti) and Devayanai (Kriya Shakti) on both sides. The Vel is made of stone and is worshipped with great veneration by devotees. Arunagirinathar also sings praises of this shrine in his Tiruppukal. Arunagirinathar sang 16 Tiruppukal psalms to Pazhamudircholai Muruga. 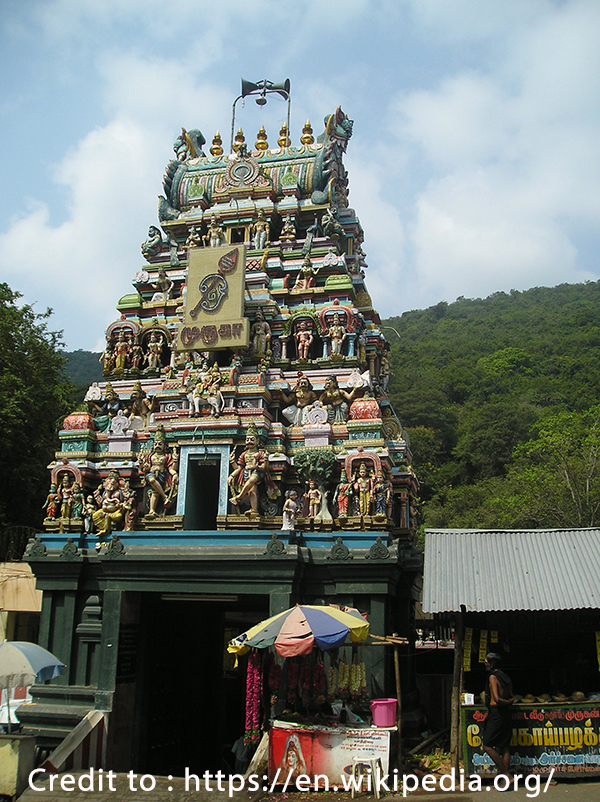 The most famous legend is of the great Tamil Poetess Avvaiyar, who experienced the darshan of Murugan as a ten-year-old boy at this temple.

Avvaiyar had been walking for a long time, and was thirsty and hungry, while Murugan, in the form of a small boy, stood on a Jamun (Naaval) tree. Murugan asked if she would like to eat some fruits. The incredibly knowledgeable Avvaiyar was excited and said that she wanted some.

The boy asked if she wanted roasted fruit or unroasted fruit. Avvaiyar was a little confused as no fruit is available in the cooked form. Being tired and not wanting to argue with the ignorant child, she asked for unroasted fruit. The boy shook the tree, and many fruits fell down. Avvaiyar collected them all.

Since the fruits were coated with sand, she blew on them to remove it. Looking at this, the boy said that only the roasted fruits are hot and asked why she needed to blow on the fruit.

Avvaiyar was humbled by the clever wordplay of the little boy. However, she wondered if he was really what he seemed to be and asked him openly. Murugan then revealed himself, and Avvaiyar bowed before him with great reverence and asked him to bless her with success in her endeavor to obtain endless knowledge.

Even if one possesses wealth, to lead a healthy, disease-free life, he should visit Pazhamudircholai. Arunagirinatha says in his hymn, that Muruga would bless with health and wealth everyone who worships him.

The festivals celebrated are- Tamil New Year, Vaikasi Vishakha, Aadi Krithikai, Aavani Pooram, and Pradosham. The most famous one is Skanda Sashti- the day where Muruga defeated the demons and liberated the Gods.

How to reach Pazhamudircholai Murugan Temple

Madurai Airport is the closest to the temple.

Madurai Railway station is the nearest to the temple

From Madurai, one can catch the bus with route number 44 to reach it. There is a shuttle from the foot of the hill to the temple, every 20 minutes. It takes roughly 15 minutes (3.4 km) to reach the temple.