The Padmanabhaswamy Temple in Thiruvananthapuram is one of the famous temples of India. This temple is dedicated to the Supreme God of Protection, Vishnu, and lies in the capital city of the South Indian state of Kerala. Here Sri Padmanabha, the principal deity, and an aspect of Vishnu is in the reclining posture and is lying on the great serpent Adisesha or Anantha. It is this serpent couch Anantha that gives the name to the city as ‘Thiru Anantha Puram,’ ‘the town of Anantha,’ where God himself is in Anantha Sayanam, the eternal yogic sleep on snake Anantha. Apart from its antiquity, the Padmanabhaswamy Temple remains one of the wealthiest temples of our land.

The Legend of Padmanabhaswamy Temple 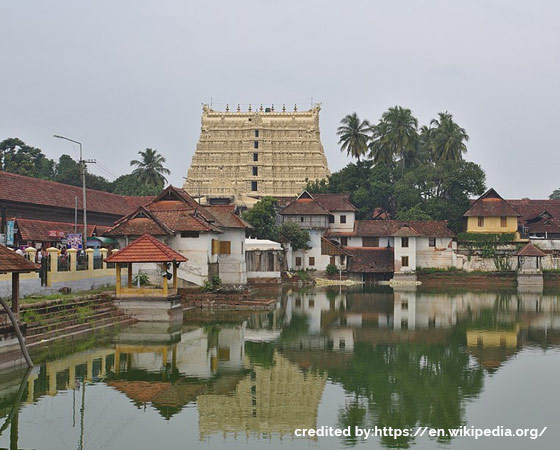 As per legend a sage called Vilvamangalathu Swamiyar prayed to Vishnu and sought his darshan. It is believed God appeared before him in the form of a mischievous boy and desecrated the sage’s deity. When the infuriated sage tried to chase away the boy, he disappeared suddenly. Realizing that the little one was none other than God himself, the sage pleaded with the Almighty to appear before him again, when a voice directed him to come to the forest Ananthavana (Ananthakadu). There, after a long search, he saw the boy again, merging with an Iluppa tree. The tree fell and formed into Anantha Sayana Vishnu, reclining on snake Anantha.

But the form was said to be so vast that it was 8 miles ( about 13 kilometers) long - with the Lord’s head remaining in Thiruvattar in Tamilnadu, the torso, or the central portion in Thiruvananthapuram, and the feet in Thrippadapuram in Kerala. Then on the request of the bewildered sage, the Lord shrunk his form so that his devotee could see him well, enjoy the sight to his heart’s content, and worship him. It is this form that is present in the temple as Sri Padmanabha, now. Still, the sage saw him in 3 portions- thirumukham, thiruvuddal and thripaddam, from head to foot, and the main idol is worshipped accordingly from 3 entrances, even today. It is said that later the king of the region and others built the temple there. The samadhi or the tomb of Vilvamangalathu Swamiyar is found not far from this temple.

There are references to this temple in many ancient scriptures like Brahma Purana, Skanda Purana, Bhagavatha Purana, and the epic Mahabharatha.

There are also Puranas which claim that Parasurama, who himself is a Vishnu incarnation, installed and consecrated the Sri Padmanabha idol in the epoch Dwapara Yuga. Padmanabhaswamy Temple has been referred to many times, in the Sangam Tamil literature period between 500 BCE – 300 CE.

According to historians, the temple goes back to the 8th century CE and comprises of imposing towers, long corridors, circumambulator passages, and high walls running all around the temple. While its majestic main tower is a 16th-century construction, this temple is widely regarded as a replica of the Thiruvattar Adikesava Perumal Temple in Tamil Nadu.

The temple is a fusion of Dravidian and Cheran style of architecture, featuring high walls and a 16th-century Gopuram. The massive idol of Sri Padmanabhaswamy is made up of 12,008 holy Saligramam stones obtained from the banks of the Gandaki river in Nepal. It is believed that the temple is a replica of the Adikesava Perumal Temple in Thiruvattar, Tamil Nadu.

In the sanctum sanctorum of the temple, Sri Padmanabha can be seen reclining majestically on serpent Anantha, with five hoods. While God’s right hand is seen placed on a Shiva lingam, his consorts Sridevi and Bhoodevi are by his side. From the lotus, whose stem emanates from the navel of God, emerges Brahma, the supreme creator. It is only due to this phenomenon that God is known by the name Padmanabha, the one with a lotus in his navel. Many other celestial beings, saints, and sages are also seen along with God, in the main shrine.

There are two Goddesses holding chamaram, Garuda, Narada, Tumburu, the divine forms of the six weapons of Vishnu, Surya, Chandra, Saptarishi, Madhu and Kaitabha are also in the sanctum.

The temple also has shrines for Lord Ugra Narasimha and Krishna Swami. The Mandapam or hall in front of the sanctum rests on a raised platform. It is said to be carved out of a single rock. The temple has a corridor with 365 and a quarter sculpted granite stone pillars containing intricate carvings that highlight the skill and artisanship of the Vishwakarma Sthapathis. The corridor extends from the eastern side into the sanctum sanctorum.

The Padmanabhaswamy Temple also stands next to a sacred tank known as Padma Theertham.

Padmanabhaswamy Temple enjoys as much religious significance as any other famous place of worship in the country and the world. This Vishnu temple remains as one of the 108 Divyadesams, regarded as the most sacred abodes of God. Sri Padmanabhaswamy is the protective deity of the royal family of Travancore. A unique Ayurvedic mix ‘Katusarkara Yogam’ is applied all over the deity’s image as a plaster, for keeping it intact and clean.

The great Vaishnava saint Nammalwar has sung many hymns in praise of the principal deity, and thus the temple and God remain glorified in the Divya Prabhandams, the scared Tamil hymns.

Many special rituals unique to the Kerala temples like Nirmalyam, Vedamantra Archana, and the like are performed here.

The Panguni festival, which falls in the Tamil month of Panguni, is celebrated for ten days. The Aipashy festival occurs in October-November. The festivals end with the Aarat (holy bath) procession to the Shankumugham Beach. The deities are taken for a purification immersion in the sea. The event takes place in the evening. The Maharaja of Travancore accompanies the deities for the Aarat procession on foot. After a ritual bath for the deities, they are taken back to the temple in a procession lit by traditional torches.

The temple celebrates Navaratri, a major annual festival. The festival lasts for nine days, and the famous Swathi music festival is held during this period. The biggest festival is the Laksha Deepam (one lakh lamps). The festival occurs once in 6 years. Chanting of Vedas and prayers is done for 56 days. On the last day, the oil lamps are lit in and around the temple premises.

How to Reach Padmanabhaswamy Temple

The nearest airport is Trivandrum International Airport, which lies 4.7 kilometers away from the temple.

The nearest railway station is the Thiruvananthapuram Railway Station, which lies 1.6 kilometers away from the temple.

The nearest bus stop is the Thiruvananthapuram Bus Stop, which lies 2 kilometers away from the temple.