The Nandeeswarar Temple is dedicated to Shiva and is situated in Adambakkam in Chennai city. It is an ancient temple and was built during the period of the Chola dynasty. The temple is old and is located close to the St. Thomas Mount Suburban Railway Station. 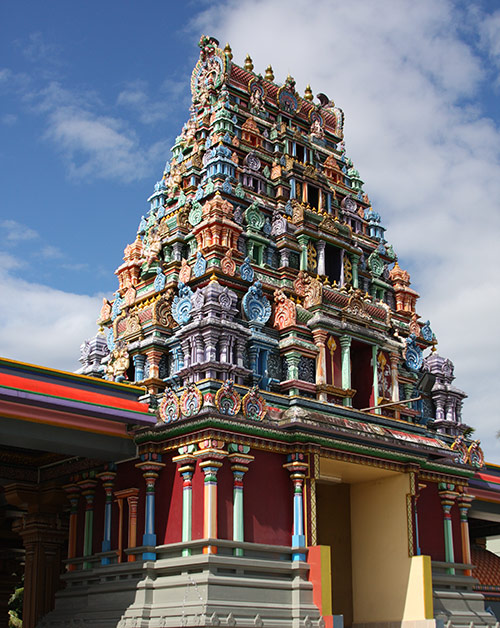 According to legend, a sage called Bhringi Munivar lived in a hill near the temple, and he worshipped Shiva. God was pleased with his worship and gave him Darshan (sacred vision) in the form of Nandi (Bull). Hence Shiva in this temple is called Nandeeswarar. As Bhringi Rishi lived on the hill, it later was known as Bhringi Malai, which is called Parangi Malai today, or St. Thomas Mount.

Another legend has it that one of the twelve apostles of Jesus Christ, St. Thomas, lived in Chennai city and was eventually killed here. The locality hence came to be known as St. Thomas Mount. There is an old church built on the spot where he was killed. The local Tamils in those days called the hill Parangi Malai (hill of foreigners) in the Tamil language.

It is believed that Bhringi Rishi kept his pitcher, that was called Kindi, at a particular place, at the time of Tapas, and the region came to be known as Kindi, which is today called Guindy.

In the latter part of the Chola period, it is believed that King Aadhani Cholan was ruling this region, and he built the temple. The place was then called Aadhanippakkam and is today known as Adambakkam.

The temple is ancient and goes back to 950 A.D. The temple was built by a Chola prince named Aadhani Cholan. The temple was later renovated by Kulothunga Chola III. However, the surprise element is that the temple shows no signs of Chola architecture, at least in the current structure. The temple resembles a 20th century C.E structure and faces the east.

The temple has two entrances –one in the east and the other in the south.

There is no tower or flag post in the temple. There is just one prakaram (corridor). It is believed there was a wall between Nandi and the main sanctum, which is not good for the temple, according to Shastras. Shri Paramacharya visited the temple once and decided to remove the wall of obstruction.

The presiding deity in the temple is Nandeeswarar and faces the east. Mother is called Aavudai Nayagi, and she faces the south. The Narthana Vinayagar, Dakshinamoorthy, Mahavishnu, Brahma and Goddess Durga are the Koshta idols placed around the walls of the sanctum. There are other shrines for Sundara Vinayagar, Sri Subramanya with his consorts -Valli and Deivanai, Nagars, Navagrahas, and Chandikeswarar in the temple premises. The idol of Chandikeswarar is huge and very old.

There are many stone inscriptions found in the Aavudai Nayagi Temple in Thiruvotriyur that make references to the existence of this temple 800 years back. The inscriptions also state that land was leased out to the temple by Kulothunga III.

The temple sculptures and carvings on the pillars are reflective of the fact that the temple is ancient. There is a 12th-century inscription in the temple that goes back to Kulothunga III, which reflects that the temple associates with the Aavuydai Nayagi Temple of Thiruvotriyur. According to the inscription, the land was donated to Sri Prabhahara Bhattar's wife for raising flowering plants for the Thiruvotriyur temple on the temple land of Nandeeswarar. The temple became more popular after the visit of Kanchi Sri Shankaracharya.

The history of the temple, and Thiruppavai are printed on the walls of the temple. One can see on the temple pillars exquisite sculptures of Kamadhenu, Vinayaka, Anjaneya, Narasimha, and Kanappa Nayanar.

A temple tank lies in the southern entrance but is not in use. The Sthala Vriksham is the Vilvam tree.

A noteworthy feature of the temple is that on every Pradosham day, a cow goes around the sanctum. A lot of cows are seen around the temple. The cow represents Aavudai, and the Bull represents Nandi.

Special poojas are performed on days, including Pradosham, Shivratri, and Somavaram (Mondays). A famous event celebrated in the temple is the Arudra Darshanam. The temple conducts special poojas on days associated with Ganesha and Subramanya. The Pradosha pooja is very special, and a cow goes around the sanctum even today.

How to Reach Nandeeswarar Temple

The closest airport is the Chennai International Airport, which lies 7 kilometers away from the temple.

The temple is located opposite to the St. Thomas Mount Railway Station. The temple is well-connected by the Metro Rail too.

The temple is located opposite to the St. Thomas Mount Bus Stop. The temple is well-connected with MTC buses.