Parassinikadavu Muthappan Temple is on the banks of the river Valapattanam in the district of Kannur, Kerala. Sree Muthappan is the main deity of the temple. His divinity is presented as a ritualistic Theyyam enactment in two versions called Thiruvappana (Vishnu) and Vellattam(Shiva). Thiruvappana and Vellattam are the generic names for two types of 'Theyyam Ketti-aadal' in the temples of North Malabar. Offerings of meat, fish, and alcohol (toddy) are given to the deity. 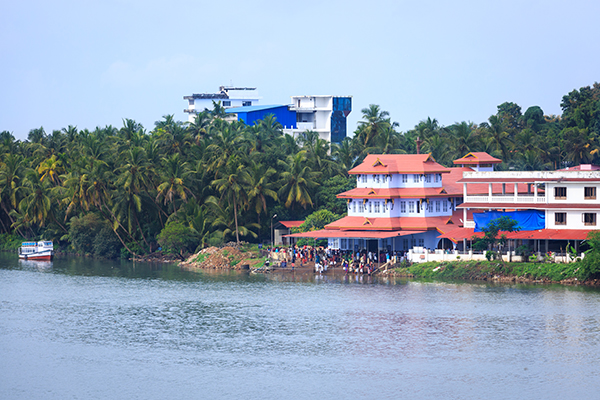 The King of Ancharamana of Eruvessi village and his wife, Padikutty Amma, had no children. The queen was an ardent devotee of Shiva, and one day she found an infant floating in a flower basket in the river where she took a bath. She thought it was a blessing from Shiva, and so the royal couple raised the child as their own. The child grew up, and he always worked for the benefit of the downtrodden and poor people. However, he practiced hunting and started eating meat, which was not allowed for a Brahmin Naduvazhi. Unable to bear the reproach of his family, he decided to leave home. When his mother tried to stop him, he looked at her with anger and appeared in his original Godly figure (Viswaroopam) before her. She bowed down before her son and requested him to cover his eyes with a Poikannu (blindfold) since she was afraid that such a fiery look would cause the cosmic force, Shakti, to emanate. Shakti was a force that could change the entire world. Wearing a shield over his eyes, the boy left the family and passed through various villages in Malabar until he was taken in by a tribal family who named him Muthappan. He was worshipped as a God, and in turn, he protected his devotees.

The Oracle who performs the Theyyam is very attractively dressed in an elaborate headgear. Once the performance is completed, he listens to the problems of the people and promises to relieve them of their sufferings. People also thank him for granting their wishes.

Dogs are considered sacred at this temple and are seen freely moving in and out of the temple. They are the Vahans (vehicle) of Muthappan, and hence they are revered by all devotees.

The temple does not discriminate between castes and religions, and all devotees are offered food here. Tea and pulses are given as Prasadam after 7.30 am every morning at the Prasadam hall.

How to Reach Muthuppan Temple:

Parassinnikkadavu is 4 km from Kadambery. Buses, autorickshaws, and taxis are available almost all the time to reach the temple.

Kannur is the nearest railway station at a distance of 20 km from the temple.

Calicut International airport is the nearest airport at a distance of 137 km from the temple.