The Kotilingeshwara Temple lies in the village of Kammasandra in the district of Kolar, Karnataka. The temple is dedicated to Shiva. The Kammasandra village was earlier known as Dharmasthali. The temple houses one of the largest and tallest Shiva Lingams in Asia. 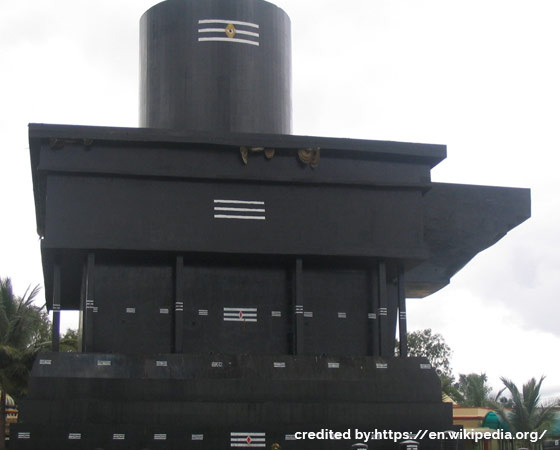 According to local legend, the King of Gods, Indra, once cursed Sage Gautama. The sage wanted to rid himself of the curse, and he installed a Shiva Lingam and prayed to God. He anointed the Shiva Lingam with the water of ten million rivers. The Shiva Lingam, even today, can be seen on the premises of the temple.

The village of Kammasandra was earlier called Dharmasthali, where Bhakta Manjunatha or Manjunathasharma lived (CE 788-827). He was born into a Brahmin Shaivite family and was a good person, but he was an atheist. With time, Manjunatha became an ardent devotee of Rudra Deva.

One day, Manjunatha and his family visited the Sri Manjunatha Temple, and some incidents occurred, which other devotees perceived as bad omens. The light in the lamps in the temple was snuffed out. The devotees laid the blame on Manjunatha for the incident. However, the local Viceroy of the Rastrakuta dynasty, Maharaja Ambikeshwaravarma, was present and quickly assuaged the other devotees. He then requested Manjunatha to prove his innocence and make every lamp in the temple glow. Manjunatha was believed to have sung the devotional song ‘Mayakaya Deepam’ composed by Maharshi Veda Vyasa. The temple lamps glowed even brighter than before. Everyone realized that Manjunatha was a great devotee of Shiva. To atone for his sins of having insulted God manifold earlier, Manjunatha, with the help of the Viceroy and his family, created ten million Lingams.

‘Koti’ means crore, and the name of the temple came to be known as Kotilingeshwara Temple. In 1980, the temple structures were built by Swamy Sambhashiva Murthy.

The temple houses a Shiva Lingam measuring 108 feet high and the Nandi measuring 35 feet in height. The Nandi is installed on a platform and is surrounded by the small Shiva Lingams across fifteen acres of land. The premises have smaller temples for other deities, including Goddess Annapoorneshwari, Sri Panchaganapathy, Sri Rama, Sita Devi, and Sri Lakshmana, Sri Pandurangaswamy, Goddess Karumaari Amma, Sri Venkatramani Swamy, Sri Anjaneya, and Goddess Kannika Parameshwari among others. The temple currently has ninety lakh Lingams and has a project to install one crore Lingams.

The temple premises also have a marriage hall, a meditation hall, a rest house, and an exhibition center. There are two flowering trees in the temple where devotees pray for wishes to be fulfilled.

Benefits of Worshipping at Kotilingeshwara Temple

The temple celebrates the Maha Shivratri festival that falls in February-March with great zeal.

How to Reach Kotilingeshwara Temple

The Bengaluru International Airport is the closest to the temple and lies 100 kilometers away.

The Koramandal Railway Station is the closest to the temple and lies 8 kilometers away.

The temple is located 2.5 kilometers from Bengaluru and Kolar. The Kammasandra Gram Panchayat bus stop is the closest to the temple, which lies 0.5 kilometers away.