The temple dedicated to Hanuman, also called Anjaneya, lies in Muthyumpeta village of Mallial Mandal, Jagitial district in Telangana. The temple lies 35 kilometers away from Karimnagar. The temple stands on the hillock of Kondagattu village. The region is blessed abundantly and offers vistas of rolling hills, scenic valleys, and refreshing water springs. The temple is home to myriad flora and fauna. The route to the temple from Karimnagar is scenic and invigorating. Kondagattu has an abundance of natural beauty and beautiful landscapes. One can also visit the fort of Kondalaraya and Bojjjapotana caves. 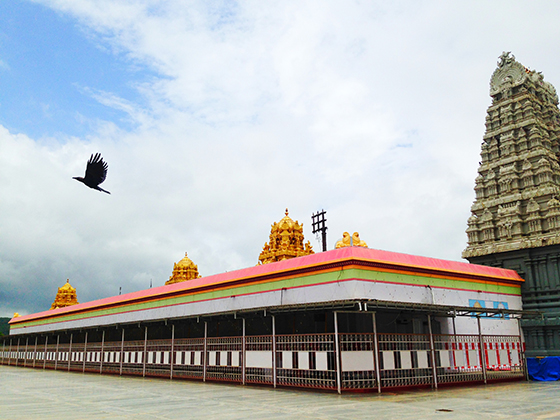 The Kondagattu Anjaneya Temple is one of the most famous temples in Telangana. Sri Anjaneya Swamy is the presiding deity of this temple. Local belief is that the temple was built by a cowherd around three hundred years ago.

The cowherd Singam Sanjeevudu lost one of his buffaloes, and he came to this stretch of the hill. He searched tirelessly for the buffalo but was unable to find the animal. Sanjeevudu fell into a deep slumber after extreme fatigue overtook him. Fatigue overtook him, and he fell into a deep slumber. Anjaneya Swamy appeared in his dream and informed him about the whereabouts of his buffalo. When Sanjeevudu started searching in the instructed direction, he came upon an enlightening idol of Anjaneya. He then built a small temple for Anjaneya.

Popular belief has it that people without the good fortune of having children can visit this temple. They have an opportunity to address their grievances to Anjaneya Swamy. Devotees visit this temple and offer 40-day prayers for Anjaneya Swamy. Anjaneya Swamy blesses them with a child. People with other diseases and mental challenges get cured after offering the 40-day puja. The Bethala Swamy Temple in Telangana offers relief to devotees suffering from black magic and other negative influences.

Nearly 160 years ago, Krishna Rao Deshmukh undertook the responsibility of renovating the temple in the 20 century. He went further and endowed some land to the temple. The temple went on to become a trust under the custody of the state endowment department in 1968. The temple attracts devotees from across Telangana.

The temple houses a Dharmagundam (holy water tank) on the premises. Devotees take a dip in the water tank before visiting the temple. The temple takes no entry fee. The trust however charges devotees for certain special pujas.

Anjaneya Swamy is a powerful God and always helps his devotees in distress and bestows bountiful blessings upon them. He is the son of

Anjani and Kesari, and the son of Wind God, Pawan. Devout prayers and recital of Hanuman Chalisa with sincerity always benefit the devotees. Anjaneya Swamy, his benevolence, and compassion are well known, and the devotees have unshakable faith in him.

Anjaneya has many names including Maruti, Banjrangbali, Pawansuta and Mangalmurti. Hanuman combines two of the most cherished traits in Hindu Bhakti-Shakti worship – strong, assertive, heroic, and loyal, loving, emotionally bound, and utterly devoted to Shri Rama.

While Hanuman plays a central character in the epic Ramayana, he has always been viewed as an epic combination of strength, heroism and assertive excellence. Hanuman is known to be loving and devoted to Shri Rama. He is also the patron God of martial arts, including wrestling, acrobatics, and diligent scholarship.

Hanuman symbolizes excellent self-control, inner faith, and service for a cause. Anjaneya Swamy is called Hanuman as way back in the Rig Veda, dated between 1500 -1200 BCE. His name appears in both Hindu epics of Ramayana and Mahabharata.

Festivals held at the temple include Maha Shivarathri, Kumkuma Puja, Nagula Chavithi, Karthika Pournami, Ugadi, Ganesha Festival, Bonalu Festival, and the Bathukamma Festival. The Saralamma Yatra is a fair that takes place once in two years.

The temple has 45 Dharamshalas for devotees to stay. There is a hotel nearby (Srinath Residency) with comfortable accommodation for devotees at reasonable rates. Karimnagar has hotels offering reasonable prices and amenities.

Bus facilities are frequent from Karimnagar, Jagtial, Sirsilla, and Asifgar. People can travel from any city of Telangana to the temple quite easily. Buses from Sirsilla travel via Vemulwada offer devotees an opportunity to visit the Sri Raja Rajeshwara Swamy Temple there.

The nearest railway station is the Karimnagar Railway Station.