The temple is administered and maintained by the Hindu Religious and Endowment Board of the Government of Tamil Nadu. This temple is a few centuries old and is located close to the Virudhachalam Vriddhagiriswarar Temple. 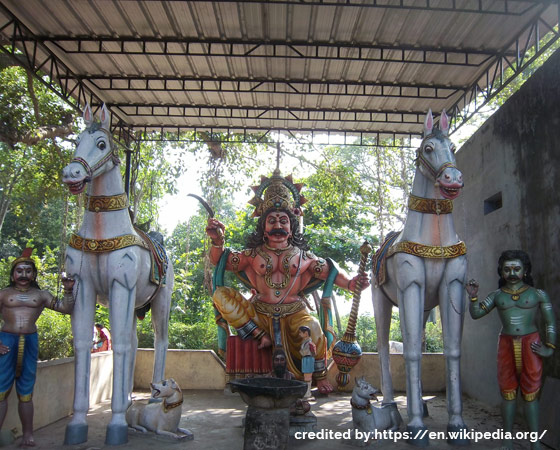 According to legend, the famous Nayanmar saint of the Shaivite tradition, Sundarar (Sundaramurthy Nayanar), came to Virudhachalam in the 8th century. The place was known as Thirumudhukundram then. The saint was old, and he left the place after formal worship. Sundarar proceeded on his journey through the dense forest without singing in praise of God, not considering himself proficient enough to do so.

Another legend has it that saint Sundarar sang in praise of Shri Vriddhagiriswarar. Shiva was pleased with his rendition and wanted him to sing a song again.

Shiva sent his son Murugan in the form of a hunter to fetch Sundarar. Murugan took away the saint’s belongings. Believing him to be the hunter, Sundarar demanded that he return his belongings. The hunter wanted him to return to Virudhachalam. The old saint realized the hand of the divine was involved, and he returned to Virudhachalam and sang again. Vruddha signifies old age. Hence the place was named Virudhachalam, after the saint Sundarar, who had visited the place in his old age.

Ultimately Murugan stayed in the dense forest of Kolanji, where he set up his abode as Kolanjiappar. He graced his devotees in the form of the Peetam. This is formless and a unique representation of Murugan.

The temple came into existence a few centuries ago and was situated in the Kolanji forest. As time passed, the abode was hidden in the dense Kolanji forest. There existed a stone statue in the shape of an altar. A cow went up to the Kolanji trees and showered the place with milk daily. The villagers noticed this strange phenomenon and went to the forest. After clearing the spot, they found a small stone altar that they came to consider as God and started worshipping it. Skanda embodied himself for the people’s benefit. It became evident to the people that Murugan graced in the shape of the altar as a Swayambhu. Murugan became Kolanjiappar.

The villagers then built a temple for Murugan. The village is called Manavalanallur because Skanda embodied himself there.

The temple is constructed in the Dravidian style of architecture and has a five-tiered Rajagopuram. Compound walls enclose it on all sides. There is a pillared hall, a Maha Mandapam, and the sanctum. The presiding deity is the small altar around 3 feet high, and the sanctum faces the east. Here, Murugan is Swayambhu Murthy.

There is a shrine for Siddhi Vinayakar, which faces east, on the right of Kolanjiappar. There are separate Vimanas for both the shrines. The temple has separate shrines for Idumban and Kadamban. Close to the Maha Mandapam is a shrine for Muniappa, facing the sanctum. Hundreds of tridents made of steel and stone are planted opposite Muniappa. There is a deity of Veeranar facing east.

The temple was consecrated in 2010, and a new Northern tower was built. A Mani Mandapam, Sidhar Mandapam, a marriage hall, and a shopping complex have been added. A guest house has been built for devotees with the aid of public donations.

The Kolanji tree is the Sthala Vriksham for the temple. The Theertham associated with the temple is the Manimutharu river. There is a deer and peacock park on the temple premises.

The presiding deity has no form as he is a Swayambhumurthy. The 3-feet tall Bali Peetam in the sanctum sanctorum is worshipped as the deity. There is a chakra carved in stone below this deity with the Satakshara Mantra (Mantra of six letters) of Murugan. The sanctum has windows in all three directions, which cannot be seen in other temples. People dedicate all poojas and Abishekam to Murugan in the form of the Bali Peetam.

The devotees bring neem oil and hand it over to the priest, who mixes it with sacred ash and returns it to the devotees. They have to apply it only after taking a bath. The application of this paste on wounds and sores heals them quickly. The paste is used on cattle too to heal their wounds. Many people have experienced healing after applying the sacred paste.

The local people do not dress their newborn for 90 days nor apply tilak. After 90 days, they bring the newborn to the temple and place them at the feet of God. They then dress them, put ornaments, and apply tilak.

People submit prayers to Kolanjiappar. Any issues worrying them like theft, non-return of money lent, diseases, family problems, unemployment, delay in marriage, and poverty can be submitted in writing. The submission is called Piradhu Kattudhal and addressed to Manavalanallur Kolanjiappar. The submission contains the name, place, and prayer of the devotee. The prayer should be clear and handed over to the priest, who places them at the feet of God. The priest performs Archana, puts Vibhuthi (holy ash) on it, and returns it to the devotee, who ties it with a thread to the Vel (spear) in the Muniappa shrine and leaves the temple.

The devotee’s prayer will be answered in ninety days. The devotee pays a fee calculated at ten paise covering the distance between his place and the temple. Once the prayer is answered, the devotee pays the fee and withdraws the submission. People crowd to this temple to submit their prayers and wishes.

Devotees offer mangalsutras, small body parts made of tin, and child images in silver in the Hundi. They also donate cattle, hens, money worth their weight, tonsuring, and carry milk pots. They also offer prayers to the Neem and Bodhi trees behind the temple and tie cradles with dolls when they pray for progeny. They donate pulses and cereals. The affluent perform mass feeding.

The priests conduct rituals four times a day with Alangaram (decoration), Neivedhanam (food offering), and Deeparadhana (waving of lamps). The temple has weekly, monthly and fortnightly rituals. Maavilakku is offered on Fridays of Aadi (July-August) and Fridays of the Thai month (January-February). The temple offers the Annadhanam scheme, which is in existence since 2002.

The temple celebrates the festival of Panguni Uthiram in the Tamil month of Panguni (March-April). During the Chitra-Poornima festival in April-May, 1008 pots of milk are carried by devotees. The temple celebrates the 10-day Vasantha Utsavam during the month of Vaikasi (May-June), and the Kritika day in the month of Aadi (July-August), with devotees carrying milk Kavadis to offer Murugan. During the Aadi festival, they pierce their bodies with the Vel (spear) called ‘Alagu Kuthal’ in Tamil.

For Panguni Uthiram, the flag hoisting is done on the first day. The presiding deities are taken in a procession around the temple.

How to Reach Kolanjiappar Temple

The nearest airport is the Trichy Airport, 126 kilometers away from the temple.

The Virudhachalam Town Railway Station is 2 kilometers away from the temple.

The Virudhachalam Bus Stand is 4 kilometers from the temple. Public buses are frequent to the temple.