Kateel Durga Parameshwari is dedicated to Goddess Durga Parameshwar It is situated in the district of Dakshina Kannada, Karnataka. The river Nandini flows across the town, where it makes the land fertile. It is also believed that the grace of the Goddess is felt in the town, which helps the town to flourish. The word Kati means ‘center,’ and eel denotes ‘earth.’ Thus this place is considered as the center of the Earth. It is believed as one of the oldest temples and dates back to the beginning of Kali Yuga. 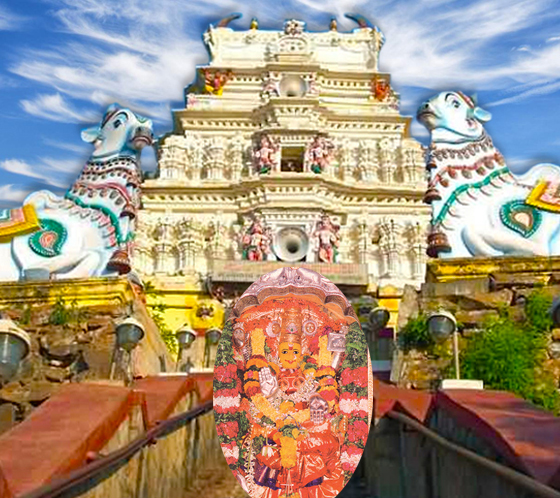 The legend of this temple is connected to a demon named Arunasura. He was bestowed with impeccable magical powers by Brahma, as the result of his austerities. He started to disturb the people on this Earth. His boon was that he could not be killed by a man, woman, or any two or four-legged creature. Goddess Parvathy turned herself into Mohini, a beautiful maiden. The demon tried to kill the Goddess, who turned into a rock. He split open the rock, and an army of bees swarmed around him. It was the Goddess herself, who tuned into bees and killed the demon. There is a great rock in the temple, where it still reverberates the incident of the Goddess annihilating the demon.

The architecture of the Kateel Durga Parameshwari:

The temple is built in the Dravidian style of Architecture. There is a tall Gopura of the temple tower, which is seven-layered. There are several halls with pillars. There are several shrines for Ganesha, Muruga, and Goddess Durga. Brahma has an exclusive sanctum, where he is worshipped with reverence. The inner sanctum has the idol of the Goddess Durga Parameshwari, who is the incarnation of Goddess Parvati.

There are several festivals celebrated in this temple, like Uthsavanga, Aropana, Flag Hoisting, Souramana Yugadi, and Rathotsava. Shiva Rathri is celebrated with great reverence. Ten days of Dhussera is very popular here, which invites people from all parts of the world. Festivals like Ugadi, Deepavali, and Makar Sankranthi are also important.

The power of the Goddess is impeccable. She rejuvenates the life of the people and pours her divine energy, which helps them gain a lot of positivity. Many people wish for progeny and longevity. People with challenges in education and career would come to this temple, and obtain positive remedies.

How to reach Kateel Durga Parameshwari:

The airport at Mangalore is the nearest to this temple. It is advisable to resort to roadways from the temple.

KSRTC connects the town of Kateel, with major cities of Karnataka. Other than buses, there are private cabs and autos.