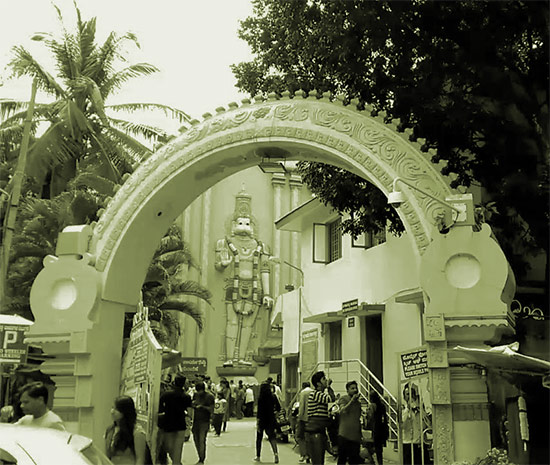 The temple, under the guidance of Sri Ganapathi Sachchidananda Swamiji, runs a lot of projects and programs for the welfare and benefit of people. There is deep compassion, apart from spiritual enthusiasm and vision to uplift the people. The temple provides affordable education and healthcare to the less privileged.

Hanuman is one of the principal deities in Hinduism. An ardent devotee of Sri Rama, he is known by several names, including Vayuputra, Anjaneya, and Bajrangbali. Hanuman is a Vedic scholar with immeasurable strength and places supreme value on Dharma (justice).

Hanuman is a powerful God who has attained lofty heights with his persistent spiritual sadhana and superior knowledge and is selfless in his devotion and loyalty to Sri Rama. Any individual can pray to Hanuman with sincerity as he can fulfill desires and brings overwhelming success to individuals who pray for fulfillment.

Hanuman is a benevolent God and is pleased with devotees and mercifully grants their wishes. The Karya Siddhi Hanuman can help any devotee achieve success in the venture he/she undertakes. Karya means endeavor, and Siddhi implies fulfillment. The Mantra focuses on protection from one’s enemies and the strength to conquer them. The Karya Siddhi Hanuman Mantra, chanted with focused effort, is sure to bring success for any devotee. Chanting the Mantra on a Saturday is especially very auspicious. The spiritual support of God is more potent than any money or power that people may seek in this world.

Despite his incredible achievements, he is humble, loyal, and selfless. Devotees venerate Hanuman and throng to his temples. Devotees consider him a divine hero and call him Chiranjeevi. Hanuman is one God who is present on earth forever and shares a special bond with Dattatreya.

A temple of Dattatreya always has a shrine of Hanuman, and Anjaneya is called Karya Siddhi Hanuman. Hanuman is a mighty God as he has imbibed the combined energies of Shiva and Vishnu. Hanuman is very generous with his devotees and bestows them with blessings and fulfills their wishes. Anjaneya is a compassionate God and always ready to satisfy the desires of his devotees. Devotees throng the temple in thousands.

The temple performs the Poorna Phala Samarpana pooja, and devotees offer coconuts to the deity to have their wishes fulfilled. According to the Poorna Phala Deeksha ritual, the devotee makes a Sankalp (desire) in front of the idol of Anjaneya and ties the coconut with the Poornaphala (outer shell) at the temple. Devotees tie the coconut at the temple and chant the Karya Siddhi Hanuman Mantra 108 times a day. They make 41 Pradakshinas (circumambulation) twice a week and continue the ritual for 16 days.

During the times of observing the ritual, devotees maintain a strict diet. They untie the coconut on the 16th day and make an offering to the deity Hanuman. Later, they make sweets from the coconut offerings and distribute them to family, relatives, friends, and other devotees. Anjaneya fulfills the devotee’s wish before or after the 16th day. The temple sees massive crowds on these days.

The temple conducts Sri Karya Siddhi Anjaneya Nitya Pooja, Sindura Pooja, and Mangala Aarti during the morning and evening hours. The temple priests perform Abishekam (sacred bath) every day for the deity and serve Prasadam (holy offering) to the devotees.

The temple celebrates Hanuman Jayanthi in December, which is a grand twelve-day temple event. Over 35,000 pilgrims visit the temple during the event.

Many local buses are plying to the Karya Siddhi Sri Anjaneya Swamy Temple.