The Jambukeswarar Temple in Thiruvanaikaval is renowned in Tiruchirapalli district, in the south Indian state of Tamil Nadu. The temple is dedicated to Shiva. The principal deity is Swayambhu (self-manifested). The temple lies in Srirangam island, which also has another famous temple, the Ranganathaswamy Temple.

The temple is being administered by the HR& CE department of the Government of Tamil Nadu. 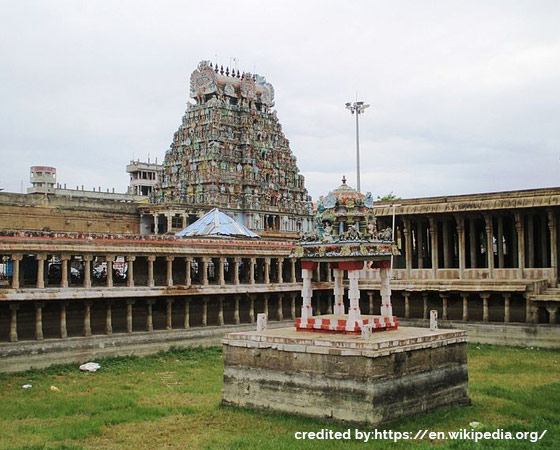 An interesting legend about the temple narrates an incident where Goddess Parvati incurred the wrath of Shiva when she mocked the penance that Shiva had undertaken for the betterment of the world. Shiva was annoyed and to punish her, told her to go down to earth, and do penance. A chastened Parvathi took the form of Akilandeswari and descended to earth from her abode, Kailasam. She chose Jambu forest (Thiruvanaikoil) as the site for her penance. Making a lingam using the water from the Cauvery river, (also called Ponni), she placed it under the Venn Naaval tree on top of the saint Jambu and began her worship. This lingam is called Appu Lingam. Here, 'Appu' means water.

Eventually, Shiva granted darshan to Akilandeswari and imparted Shiva Gnana to her. Akilandeswari took the Upadesa (lessons) while facing East from Shiva, who was facing west.

Another legend is about two Shiva Ganas who were under a curse and found redemption by worshipping Shiva at this temple. The two Shiva Ganas (Ganas are the disciples of Shiva who lived in Kailasam), were named 'Malyavan' and 'Pushpadanta.' They were very quarrelsome and used to fight with each other constantly. During one such fight, they cursed each other. While 'Malyavan' cursed 'Pushpadanta' to become an elephant, Pushpadanta cursed the former to become a spider.

The two then came down to earth and made their way to Jambukeswaram, where they continued to worship Shiva. The elephant collected water from the Cauvery river and performed ablutions to the Lingam that was under the Jambu (rose apple) tree daily. As for the spider, it spun a web over the Lingam to prevent the withered leaves from falling on it. The web also ensured that sunlight did not fall directly on it. The elephant noticed the web and mistook it for dust. Hence, the elephant removed the web and washed the Lingam clean by pouring water on it. It continued this practice daily. Angry over this, the spider crept into the trunk of the elephant and bit the elephant to death. It also killed itself in the process.

Shiva, as Jambukeswara, was moved by the great devotion of the two creatures and removed their curse. Because an elephant worshipped Shiva here, the place came to be called Thiru Aanai Kaa (thiru means sacred, aanai means elephant, and kaa (kaadu) means forest). Later the name 'Thiruaanaikaa' became 'Thiruvanaikaval' and 'Thiruvanaikoil.'

Since the spider had committed a sin by killing the elephant, in its next birth, it was born as the Chola king, Kochengot or Kotchengannan (the red-eyed one). During his lifetime, he built 70 temples, including this temple. This fact finds mention in the work, Nalayira Divya Prabandham. In remembrance of his feud with the elephant in his previous birth, the king also built the Shiva Sannidhi (sanctorum) in such a way that not even a calf elephant could enter it.

The entrance to the sanctorum of Jambukeswara is just 4 feet-high and 2.5 feet wide.

A story gives the reason for the king's red-colored eyes. When his mother was pregnant with him, the palace astrologer recommended an auspicious time for the birth. This, he said, would ensure the infant's well-being. But the queen went into early labor before the predicted time. The queen then asked her maid to hang her upside down to delay the birth until the auspicious hour arrived because she wanted a wise and virtuous son who would rule the kingdom righteously. As the baby had to wait inside the mother's womb for a while, his eyes became red. Once he became the king, he built the temple for Shiva and Goddess Akilandeswari. The name given to it was Aanaikka (protected from an elephant), which later became Thiruvanaikovil.

According to history, a sage named Jambu performed severe penance to Shiva in this place. Pleased with his devotion, Shiva granted him darshan (sacred view) and offered him the Naaval fruit (blackberry) as Prasadam. The sage consumed the seeds too as he did not want to spit out the seeds, considering it to be a sin. Once the seeds reached his stomach, they began to grow into a tree and pierced his head. Sage Jambu thus attained salvation. As Shiva granted salvation to the sage, he is known as Jambukeswarar here.

The temple was built by King Kochenga Chola, an early Chola ruler, around 1,800 years ago.

The architectural splendor of the temple is highly noteworthy. It has five enclosures. There is a massive outer wall that covers the fifth precinct. It is called the Vibhuti Prakara and stretches over a mile. Legend has it that the wall was built by Shiva, who worked along with the laborers. There are inscriptions from the Chola era that can be seen here.

The sanctum's western side, from where the worshippers can view the deity, has a large closed hall, called the Mukha Mantapa. This has four pillars and a bronze idol of Shiva's vehicle, Nandi. The Mantapa also has a large, ornate western door that is gilded with silver. This is the main entrance.

From the Mukha Mantapa, a set of three steps descend to the area of the sanctum sanctorum. The deity is viewed through a stone window that is an integral part of the sanctum's western face. The window's nine viewing apertures are said to represent the Navagrahas. A panel in bas-relief over the window depicts the Sthala Puranam - the Jambuka tree growing out of the meditating sage's head, the Lingam of Jambukeswarar beneath the tree; an elephant and a spider worshipping the Lingam, and Goddess Parvati, who is seen to the left of the Lingam.

The idols in the temple face each other. Such temples are called Upadesa Sthalams. As the Goddess was like a student and Jambukeswara like a teacher or Guru, in this temple, Thiru Kalyanam (marriage) ceremonies are not conducted here for Shiva and Parvati, in contrast to other Shiva temples. The shrine of Goddess Akilandeswari and that of Prasanna Vinayaka are in the shape of an Om, the Pranava Mantra.

Legend goes that the Amman here was in a very angry mood. So, Adi Sankara, during one of his visits, installed an idol of Prasanna Ganapati opposite to her shrine, and a pair of Sri Chakra Thaatankas or earrings to cool her anger. A sculpture of Ekapada Trimurti, an aspect of Shiva along with the deities, Vishnu, and Brahma, emerging from it, can be found in the temple. This can be seen only in Thyagaraja temple, Tiruvottiyur. Many inscriptions from various Chola kings from the 11th - 12th century can be seen here.

The holy tree or Sthala Vriksham is the White Jambuka (Venn Naval in Tamil and rose apple in English). The Theertham is the Nava Theertham.

This temple is one among the five prominent Shiva temples in Tamil Nadu. Collectively, they are called the Pancha Bhoota Sthalams, and they represent the five elements of air, water, fire, earth, and space. The Jambukeswarar temple represents the water element. Its sanctum has a subterranean stream that is always filled with water, though the authorities keep pumping it out regularly.

One of the 275 Paadal Petra Sthalams, the four most revered Saivite saints or Nayanmars, as they are called, have sung the praises of this temple's deity. This is the 60th temple dedicated to Shiva on the northern bank of the Cauvery river that finds praise in the Thevaram hymns.

The main deity is Jambukeswara, who represents the element, water. Jambukeswara is shown sitting under a Jambu tree, which grows over a small stream that covers the deity during the monsoons. Supposedly, a stream of water flows from the Lingam, and the soaking wet clothes it is draped in seem to bear this out. The flow of water is more during the monsoons.

As Goddess Akilandeswari worshipped Shiva in this temple, at noon, the priest dresses like a female and performs a pooja for Jambukeswara and 'Go Maatha' (cow). This pooja is very famous, and many pilgrims attend it daily. A special kind of black cow, called Karum Pasu, is used for the pooja.

This temple forms one of the venues for the annual Natyanjali.

Benefits of Worshipping at Jambukeswarar Temple

Devotees perform Abishekam and offer Vastras to Shiva and Mother Akilandeswari. It is said that by worshipping here, one will be able to attain freedom from the cycle of birth and death. Those who wish to get married, have progeny, high yields in farming and abundance of water, visit this temple. The Goddess also bestows good intelligence and education to her devotees.

How to Reach Jambukeswarar Temple

Chathiram Bus Stand is located 3 kilometers away from the temple. Buses, autos, and taxis can take one to the temple, which is very accessible as it is on the Trichy-Chennai highway.

The Trichy Junction lies 8 kilometers away from the temple and is the nearest railway station.

Trichy (Tiruchirapalli) is the nearest airport, which lies 15 kilometers away. Local transport is available from the airport to the temple.