The ISKCON temple is dedicated to Sri Krishna. In Chennai, the Vaishnava temple lies on the East Coast Road at the Hare Krishna land in Akkarai, Sholinganallur. The temple has been built on 1.5 acres of land and is the largest temple for Radha Krishna in Tamil Nadu. The temple was inaugurated on April 26, 2012. 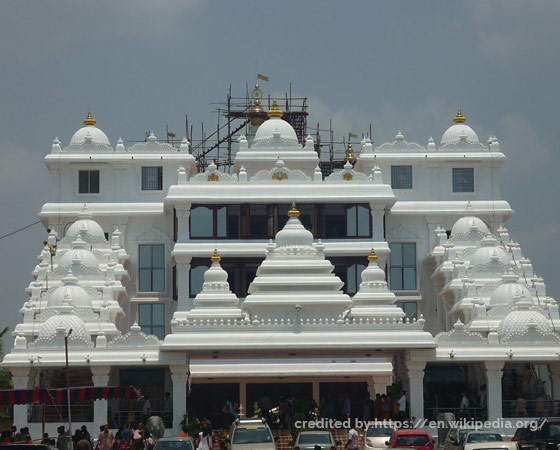 The founder of ISKCON, A.C. Bhaktivedanta Swami Prabhupada, spread the message of Sri Chaitanya across the world. He was keen to establish many centers in India. Once he had established the awareness of Krishna consciousness across the West, he returned to India. He directed Giriraj Maharaj to go to Madras and preach about the activities of ISKCON. The mission received a wide response and several life patrons

Swami Prabhupada visited Madras in February 1972 and delivered lectures across the city. In 1975, a center was opened in Kilpauk and later shifted to Kilpauk Garden Road. In 1988, the center moved to T. Nagar, where the members of ISKCON increased significantly. The response was very positive, and Swami Prabhupada expressed his wish to build a temple.

Years later, devotees serving under the leadership of Bhanu Swami identified 6.5 acres of land in Injambakkam and acquired the property for the temple. The temple was then built solely on donations from the people in Chennai. The first stage of the temple project commenced in March 2002. Built on 45,000 square feet of land, the construction of the temple cost a hundred million rupees. The donations came from 8,000 life patrons and devotees.

The deity installation (prana pratishtha) ceremony took place with the principal deities of Radha and Krishna along with their two Sakhis (friends), Lalitha, and Vishaka, installed in one of the three teak-wood altars in the main hall. The Kumbabhishekam was performed on April 26, 2012.

The deities worshipped in the temple are that of Radha Krishna, Lalitha- Vishaka, Jagannath- Baladev -Subhadra, and sri sri nitai gauranga.

The temple is built on five levels. On the temple premises is an auditorium for cultural and spiritual programs on the ground floor.

The Prasadam hall is in the basement. There is a 7,500 square feet temple hall on the first floor.

There are three teak-wood altars in the temple that house Sri Krishna with Radha and their friends, Lalitha and Vishaka, Sri Chaitanya with Sri Nityananda and Sri Jagannath, Baladeva and Subhadra. The deities have been obtained from Jaipur and Odisha. The temple is inspired by the Pallava and Kalinga architecture, and the gopurams of the ISKCON Temple have been built in the Kalinga style, with a Sudarshana Chakra atop the temple’s tallest tower. Constructed under the guidance of Bhanu Swami, the temple has been inspired by Vedic scriptures.

At the entrance of the temple is the Bhu Mandala (representation of the universe) on the marble floor. The universe is represented by a series of circular islands placed around a central pillar called Mt. Meru. The design at the entrance has the same pattern. In the patio, there is a life-size statue of a cow feeding a calf.

The purpose of the temple is to cast aside materialism and resonate with spiritual identity that reflects unconditional love. This has a graphic representation in the form of a magnificent chandelier reflecting numerous colors on the walls and ceiling. The chandelier has 500 Himalayan quartz crystals that are supposed to enhance the spiritual energy in the temple. The temple displays numerous Vaastu Shastra features.

The fundamental beliefs of ISKCON are based on the traditional Hindu scriptures, including the Srimad Bhagavatam and the Bhagwad Gita. There is a book shop near the entrance of the temple.

How to Reach ISKCON Temple, Sholinganallur

The Chennai Airport is the closest airport to the temple.

Frequent bus services can be availed to reach the temple.