Shirdi Sai Baba temple in Injambakkam, Chennai, is a popular place of worship and one of the most visited in Tamil Nadu. The temple draws devotees from all over the country. Injambakkam is a small hamlet which lies on the scenic ECR road in Chennai. The place is called Saipuram. A great serenity and peace pervades the temple precincts. One can sense the divine presence of Baba in the place. There is plenty of greenery all around, so it is cool and shady even in summer. The temple is a peaceful retreat for people of all faiths.

Shirdi Sai Baba is the presiding deity of the temple. He was a much-revered saint of the 18th century, and whatever is known of his origin and teachings have come for the most part, from folklore. But later, Sai Baba became the center of a cult that came to be known as All India Sai Samaj. The temple is now the headquarters of the community that was formed around this cult. A person called Narasimha Swamiji founded the Samaj in the 1940s. And it was he who also founded the temple a decade later, in 1952. The followers of the temple now number hundreds of thousands, and hordes of people visit this temple every year to worship the enigmatic saint. Many celebrities and public figures are among those who come to pay their respects to the saint.

Sai Baba is regarded as a spiritual reformer who is not associated with any particular god, but he is worshipped by people of all religions. Hindus, Muslims, Christians, and Parsis are among those who visit the Shirdi Sai Baba temple in Injambakkam. At the temple, there are fixed days and hours for reading the Quran and the Bible, which is not seen in other religious establishments. 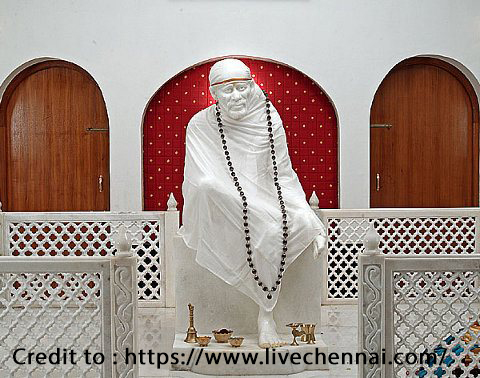 Shri Sai Baba was born in 1835 to a Brahmin couple of Patri, in the Nizam state of British India. His date of birth is unknown, and it is said that his parents handed him over to a fakir, when he was 5 years old. When he was 16, Baba came to Shirdi, a village in Maharashtra. Seeing the young boy sitting in deep meditation under a neem tree, without taking food or water for many days, the villagers became curious. Bayajabai, The village chief’s wife, Bayajabai, occasionally enquired about his well-being and later started giving him food. Soon, Baba began treating her like a mother. The village chief, Mhalspati, and a priest began saying that he was a holy spirit.

Baba asked the villagers to dig the roots of the neem tree. When they dug it, they came across a stone slab, oil lamps burning without any oil or air, etc. They also found a vessel shaped like a cow’s mouth on a wooden table. Baba said this was the place where his guru did penance. He also told them to worship the tree instead of him and asked them not to touch it. This tree is the first thing pilgrims come to see when visiting Shirdi.

For one year, Baba left Shirdi, and no one knows where he was during that period. But it is said that he met many fakirs and saints, and also worked as a weaver in this time. In 1858, Baba returned to Shirdi, and this time, he stayed on. For 5 years, Baba lived under the neem tree, but after this, he shifted to a mosque nearby Many took Baba for a saint or a god. As the years rolled by, visitors to Shirdi increased. Many people reported miracles that had happened in their lives, thanks to Baba’s blessings. Even after death, he continues to work miracles for those who believe in him. It is said that his last words were: “Have faith and patience. I will always be with you wherever you are.”

Baba exhorted people to do charitable acts and share what they had with others. He encouraged all to love others without any discrimination. It is said that his blessings are given directly, without any intermediaries. He used the dakshina he received to improve his disciples’ karma by giving it to others. He would perform miracles to help those who came to him with their problems.

The temple, which lies on the outskirts of Chennai, was constructed in March 1993 and occupies seven acres of land that faces the Bay of Bengal. It is called the Shirdi of the South. The temple complex comprises several buildings and temples and offers a splendid view of the seashore.

Before reaching the main temple of Baba, one can see a shrine for Lord Ganesha.

The main temple is an elegant hexagonal structure made of white marble and has a height of 100 ft. There are concrete ladders to climb to the top. Pure, white marble has been used to handcraft the idol of Shri Sai Baba, who is seen in his famous sitting posture. Baba also has the name of Dwarakamayee, and the idol here is a replica of the one in Shirdi.

Beside the sanctum is a special room where the holy fire (Dhuni), from which the ash (Udi) was collected by Baba and distributed to the devotees, burns continuously. It has been so since Baba's days. This is a unique feature of the temple.

There are shrines for Lord Shiva and Parvati, Lord Hanuman, Durga Devi, Lord Ram, Sita and Lakshman, Navagrahas, Lord Venkateswara, Lord Krishna and Radha, and also Lord Muruga and his consorts, Valli and Deivanai. The Vallabha Ganapathy idol with ten arms is one of the main attractions. An important feature of the temple is a Kalapataru or wish-fulfilling tree. Devotees who come here tie a string dipped in turmeric around the tree on Thursdays and Fridays. This is believed to fulfill their wishes and resolve their problems. Near Baba’s sanctum is a Dhanvanthari tree. Those suffering from various ailments take nine rounds around the tree and are said to be cured of their diseases in a few months.

From Chennai city, one can take cabs or buses to reach the temple. It is 19 km from Chennai. Chennai is well connected by road, air, and rail networks.