The Maha Ganapathy Temple in Edappally is one of the most important Ganapathy temples in Kerala visited by devotees from all over the state.

Ganesha, also called Ganapathy or Vinayaka, is considered to be the most auspicious God in Hinduism. He is the most well- known and revered God and is the remover of all obstacles. People always pray to Ganesha before they undertake anything new, be it education, examinations, a job, a new home, or undertaking a new business or even a journey. Ganapathy, the elephant-headed God, represents intellect and wisdom. Widely considered the God of beginnings, Ganesha is honored at the start of religious ceremonies and rituals. 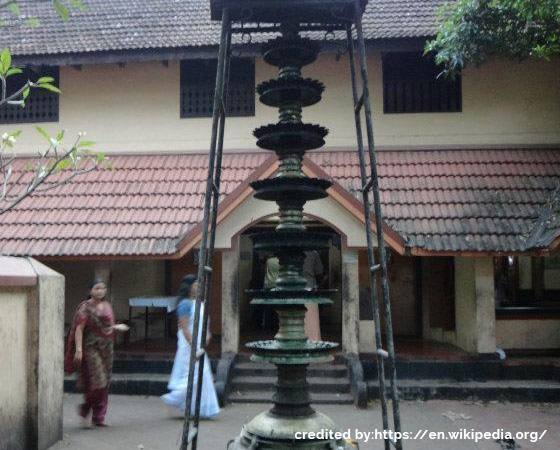 The temple lies in the center of the forecourts of the Edappally Swaroopam. The presiding deity is Ganesha. The sanctum is referred to as the Aithihya Mala (Garland of Legends) in the works of the well-known Malayalam writer, Kottarathil Sankunni.

The temple has the main sanctum and deity facing the east.

It is believed God himself appeared once before the Edappally Swaroopam while performing the Ganapathy Homam and accepted the offerings. The devotees visit the temple to seek fulfillment of their wishes and prayers. They offer prayers for obstacles and difficulties to be removed from their lives.

The presiding deity is considered to be the benefactor and patron of the Edappally royal family. The Edappally Rajas were the rulers of the late medieval kingdom of Edappally. These kings were great patrons of temples and were also known as Edappally Thampurans (Lords of Edappally). They built some of the most famous temples, and one among them is the famous Maha Ganapathy temple at Edappally.

The Udayasthamana pooja, where the ceremonies are conducted from morning to evening, is extremely popular.

People make offerings of coconut, Niramala, Pushpanjali, Chuttuvilakku, Udayasthamana pooja, and Koottappam in advance. The floral and lemon garlands, ghee, and oil are available in the temple itself. Devotees offer prayers and poojas in the temple, asking God for obstacles and impediments to be removed from their path.

There is no festival or consecration celebrated or performed in this temple. The Edappally royal family have their darshan (sacred view) after the devotees leave the premises. Members of the Edappally royal family worship at the Ganapathy temple after these hours since it is their family temple. The temple is kept open during the evening hours too.

The Ganapathy Homam and Unniyappam ritual are important offerings. Unniyappam is booked months ahead. It is believed that breaking a coconut before beginning a project will see that it is completed successfully.

How to Reach Edappally Ganapathy Temple

Kochi International Airport at Nedumbaserry is 25 kilometers away from the temple.

The nearest bus stop is the Edappally Church stop. The temple stands very close to the national highway -NH 47.