Chottanikkara Bhagavathy Temple is one of the famous temples of India, dedicated to the Mother Goddess. She is Shakti, the universal feminine power, and is known by many names and worshipped in many forms all over this land. And here, she is enshrined and prayed to as Goddess Bhagavathy or Bhagavathy Amman .

Chottanikkara is the southern suburb of the port city of Kochi and lies in the south Indian state of Kerala. This also remains as one of the very popular temples of the state and is visited by thousands of devotees all around the year. The Cochin Devaswom Board manages the temple. 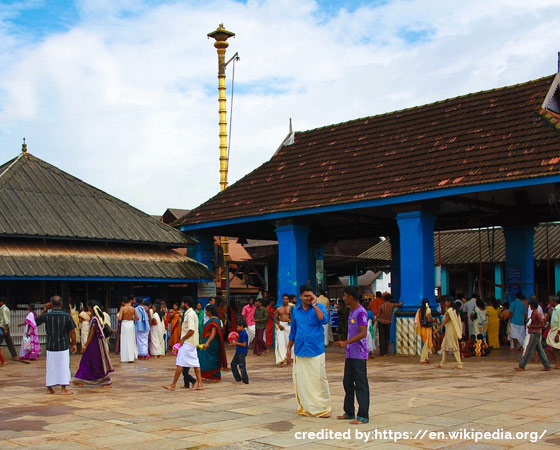 The temple is nearly 1,500 years old and has a few interesting legends about its origin.

It is said that this place was once a thick jungle, and there lived a forest-dweller named Kannappan, here. He was a staunch devotee of Goddess Kali and used to sacrifice a cow or calf to her on Fridays, as those were believed to be auspicious for the worship of the Goddess. But on one Friday, he could not find any such animal for offering to the Goddess, and hence asked his young daughter Manimanga for her pet-calf, for the sacrifice. But the little one pleaded with her father to spare the calf’s life and instead, offered herself to be sacrificed to the Goddess.

While the forest-dweller was deeply touched by the great compassion shown by the young girl and her readiness even to give up her own life for saving the calf, the latter revealed itself as none other than the Mother Goddess, who blessed them and disappeared. This brought a thorough transformation in Kannappan and turned him into an ardent devotee, who then started praying to the Goddess there itself. It is this deity who is worshipped as Bhagavathy here, in the present times.

As per a slightly different version, Kannapan’s little daughter, who was fondly bringing up the calf, died suddenly. When the heartbroken Kannappan tried to do the final rites, her lifeless body itself disappeared, suddenly. As the forest dweller stood there bewildered, a holy man told him that this was nothing but a kind of divine punishment for him. For, he had snatched away many calves from their mothers and slaughtered them, and hence he must experience a similar agony and sorrow. But then, even the little calf that was dear to his daughter was not to be found, and instead, there appeared two stones in that place. The holy man again clarified to him that the stones represented none other than the divine couple Vishnu and Lakshmi and that by worshipping them with faith, he could extricate himself from his sins.

These divine stones, which gradually fell into disuse, were found later by a grass cutter, and subsequently, they began to be worshipped as the Holy Mother, here.

The temple of Chottanikkara Bhagavathy has great historical appeal and traditional influence. The Divine Goddess was worshipped by the Bhogacharya. The deity in laterite called Rudraksha Sila was worshipped by divine saints that included Adi Shankaracharya, Vilwamangala Swamiyar, Chemmangattu, and Kakkasseri Bhattathiri.

The credit for the origin of the Goddess here belongs to the great saint Adi Shankara. Realizing that there was no temple for Goddess Lakshmi in Kerala, Adi Shankara is said to have once meditated on the Devi at the Kodachadri Hills in the present-day Karnataka. Pleased with his devotion, the Goddess agreed to follow him wherever he went on foot, but on the condition that he should never look back even once, to check her presence. But on their journey towards Kerala, the saint was forced to look back to check on her at a point, and the Goddess stayed put there itself! That place was the holy Mookambika, in the Karnataka state.

Though shocked by the unexpected turn of events, Adi Shankara sought her pardon with sincere prayers, and the compassionate Goddess agreed to continue with him, and finally took her abode at Chottanikkara, as Goddess Bhagavathy, as per Adi Shankara’s wish.

The temple lies in hilly terrain and is surrounded by greenery. The temple has a calming and soothing influence on devotees.

The original idol of Goddess Bhagavathy is around four feet tall, facing east, and is made of red laterite. The Goddess is believed to be ‘Swayambhu’ (self-manifested). The image is called Rudraksha Sila and is irregular in shape. This image can only be viewed early in the morning when the sanctum opens for Nirmalyam.

The golden-hued idol of Goddess Bhagavathy in the main temple is beautifully decorated with colorful saris and exquisite jewels. Besides, she is also seen holding in her upper right hand the disc; the upper left hand bears the conch, the lower right hand is seen in a pose conferring boons, and the lower left is seen in the Abhaya Mudra. The conch and disc are the celebrated weapons of Vishnu. Hence Goddess Bhagavathy is also viewed as an embodiment of Vishnu, and it is no surprise that people worship her with the chants ‘Amme Narayana, Devi Narayana, Lakshmi Narayana, Bhadre Narayana.‘

The Goddess Bhagavathy at Chottanikkara is regarded as the combined form of all the three aspects of the supreme feminine power and is accordingly worshipped as Goddesses Maha Saraswati, Maha Lakshmi, and Maha Kali, in the mornings, during the day, and in the evenings respectively. As Goddess Saraswati, she is seen attired in pure white. Goddess Lakshmi at noon wears crimson red, and in the evening, Goddess Durga is seen in bright blue.

This temple complex that stands as an excellent example of wooden architecture and sculpture also remains one of the biggest in the state. Apart from the Bhagavathy Amman’s main shrine, there are separate shrines for Vishnu, Shiva, Brahma, Dharma Sastha, Ganesha, Subramanya, Hanuman, and the Nagas, here. Keezhkavu Bhagavathy, the Goddess in the aggressive Bhadrakali form, is enshrined separately in a lower-tier opposite to a large tank, and her idol is said to have been installed here by Saint Vilvamangalam Swamiyar. The devotees have a belief that they must visit and pray at both the main temple of Goddess Bhagavathy in Chottanikkara and, also, at the Keezhkavu temple, for their worship to be complete.

The bursting of crackers remains a unique form of worship, undertaken by the devotees here, and this popular ritual goes by the name ‘Vedi Vazhipadu.’

The Guruthi Pooja earlier used to be performed only on Fridays. But currently, the pooja is conducted late in the evening daily. The ritual involves chanting divine verses offering twelve pots of Guruthi – a mixture of lime and turmeric that turns red, to the Devi. The mentally afflicted are brought in for cleansing and healing amidst percussion and prayers.

Both Goddesses Bhagavathy and Bhadrakali are regarded as divine healers, who can cure devotees, of even incurable diseases, and mental illnesses, and free them from possessions of evil spirits. Those, so relieved from the clutches of evil spirits, drive nails into an old ‘Pala’ tree found in the complex or on its fence. In earlier days, the devotees drove the nails into the tree using their foreheads instead of hammers. The Goddess has bestowed blessings and cured innumerable devotees, and the tree is proof of the incredible faith of the devotees.

The temple celebrates the main festival of Makom Thozhal that falls in February-March for seven days. The Goddess Bhagavathy is dressed in her finery, and the temple holds elephant processions and elaborate poojas. Many weddings too are conducted at the temple during the festival.

The annual festival of the temple falls in February-March with the flag-hoisting ceremony on the day of Rohini star. The festival lasts for nine days.

Other festivals include Vishu in mid-April.

Tuesdays and Fridays are very important for Goddess Bhagavathy and devotees flock to the temple on these days.

How to Reach Chottanikkara Bhagavathy Temple

The nearest airport is the Kochi International Airport, located 38 kilometers from the temple.