Bhadrachalam Temple is also called Lord Sree Sita Ramachandra Swamy Temple, which is dedicated to Lord Rama. This temple is situated in the Khammam district of Telangana. Lord Rama is the seventh incarnation of Lord Vishnu. The temple is also called Dakshina Ayodhya. It is one of the Divya Kshetrams which are revered as the prominent shrines of Vaishnavism. In this temple, Lord Vishnu appeared as Vaikunda Rama with four hands, to answer the question of Mount Meru’s son Bhadra. Hence the name Bhadrachalam became prevalent here. Saints like Adi Shankara and Thirumangai Alwar have visited this shrine. This is considered an iconic temple and an important Vaishnava shrine, which is visited by people across the globe. 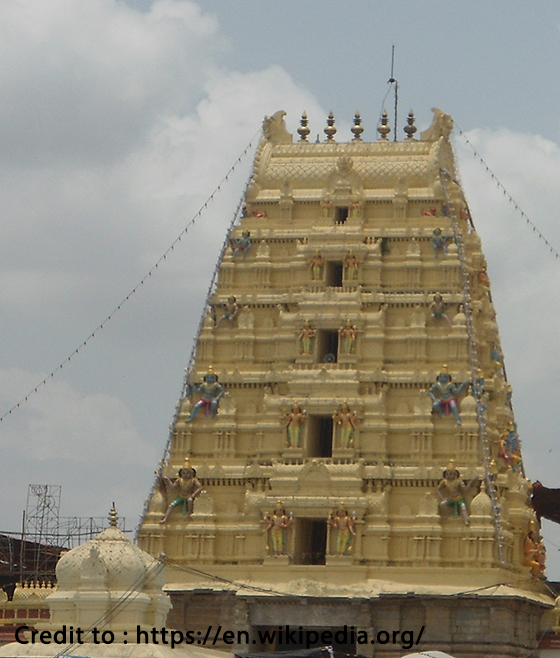 Legends connect this temple with Ramayana. Lord Rama, Lord Lakshmana, and Goddess Sita lived here in this town during their exile. This was the site where Goddess Sita was kidnapped by Demon King, Ravana. The idol was found in the 17th century by a tribal woman called Pokala Dhammakka. It was found covered by an anthill. She cleansed the anthill with sacred water from the river, Godavari.

Gopanna was the revenue minister of the ruler, Abul Hasan Qutb Shah. In his kingdom, there was some extra tax levied on Hindus, and he also forced them to convert to Islam. On seeing the dilapidated temple of Lord Rama, he used a portion of the collected tax to construct a temple. On knowing this, the king became angry and asked Gopanna to repay the money. Later, in the dreams of the king, Lord Rama and Lord Lakshmana appeared and paid the king with real gold coins.

It is also believed that once an Islamic devotee wanted to gain entry and worship Lord Rama. He was not allowed but was detained in the corridor. The idols started to disappear, and only when he was permitted to enter the temple, the idols came back.

The architecture of Bhadrachalam Temple:

The temple has three parts. The head of Bhadra is located in the first part of the temple, where there is a dedicated shrine. The footsteps of Lord Rama can be seen in the temple. The temple sanctum is regarded as Bhadra's heart. The main temple tower or the Rajagopuram is the third part, where the feet of the lord is located. One has to climb almost 50 steps to reach the main entrance. The temple has a panchaloha (five metals) Garuda statue, which is highly revered by the devotees. Sudarshana Chakra is placed on top of the Vimana. It is believed that the statue of Lord Rama, along with Goddess Sita, is self-manifested here. It has several similarities with the Srirangam temple of Trichy. There are several shrines for Goddess Lakshmi and Lord Anjaneya. There are several carvings on the wall, and several tablets of inscriptions are also here. All the water required for poojas is drawn from the temple tank.

This temple follows “Vaishnava Samprathayam”, the traditions of Vaishnavism. There are several festivals celebrated in this temple. Prominent among them is “Vaikunta Ekadasi”, which is celebrated for ten days, during December or January. Sri Rama Navami is another important festival, and many people across the globe come to witness it. “Thirukkalyanam”, the celestial marriage of Lord Rama and Goddess Sita, is also celebrated here. Other important festivals at this temple are Hanuman Jayanthi, Vasanthotsavam, Brahmotsavam, Navaratri, and Deepavali.

How to reach Bhadrachalam Temple :

Nearest Airport is in Rajamundry, which is 185 kilometers from this town. Road transport takes you closer to the temple.

Bhadrachalam Road station is almost 40 km away from the temple. One can either take a local bus or taxi to reach the temple.

APSRTC bus facilities are available to all parts of the town. The temple is well connected with other cities of India. The nearest bus stand is near the temple premises. There are several other means of road transport, such as taxi, auto, and local buses.