Basara Saraswati Devi Temple or Gnana Saraswati Temple is dedicated to Goddess Saraswatiy, who is an embodiment of knowledge and wisdom. It is one of the famous temples dedicated to her, and another one is located in Jammu and Kashmir. This temple is located on the banks of river Basar in Telangana, India. "Akshara Abhyasam" ceremony for initiating children into learning for the first time, is performed here. In this temple, Goddess Saraswati is adorned with a new saree every day. The sarees are auctioned on the day of Mahalaya Amavasya during September or October. 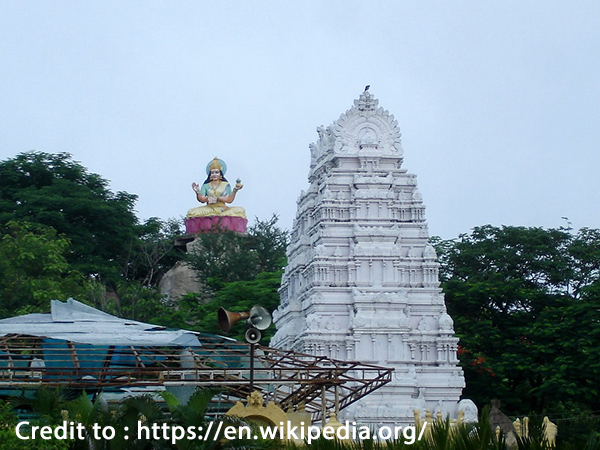 This temple was earlier called Vyasapuri, as Sage Vyasa had installed a statue of the Goddess, which he made all by himself by assembling all the grains of sand. He wanted to build a Goddess which would radiate positive power. This temple was then found by Sage Narada, who understood the power of the goddess. It is believed that along with Sage Narada, many other Gods like Brahma and other Sages also used to come and visit this temple with a lot of piety.

Along the banks of the river Saraswati, the statue of the Goddess stands tall and magnificent above the hillock. It is a beautiful sight, thanks to its architectural excellence. The temple is located in the salubrious environment, and there are a lot of shrines for several other deities. Goddess Kali’s statue has been installed in this temple. Goddess Lakshmi’s statue is present here and it attracts a lot of devotees. One could also worship the holy trinity. The temple has a hall with a lot of pillars. There are several inscriptions in the temple, and various carvings are also found here.

Among the festivals, Saraswati Pooja is one of the more important ones. Shiva Ratri is celebrated with greater prominence. All the ten days of Navaratri is celebrated with great reverence. Vasantha Panchami is also an important festival in this temple. Other important festivals are Deepavali, Ugadi, and Makar Sankranthi. Fridays attract a lot of worshippers. Many people come to pay their tribute to Goddess Saraswati. People who are creative and artistic frequent this temple to gain the blessings of the Goddess.

Many people visit this temple to pray to the goddess to bestow them with good education and knowledge. Children are initiated into the world of education at this temple during the special ceremony called "Akshara Abhyasam", which is very similar to “Vidhyarambam” in Kerala and Tamilnadu. People offer clothes, and garlands to the goddess to appease her and to gain mastery over the arts and education.

The nearest airport to reach this temple is in the city of Hyderabad. This is both a national and international airport. Once you reach Hyderabad airport, it is best to use roadways. Private taxis are available.

The nearest railway station is the Basar Railway Station, which is located close to the temple premises.

This temple is well connected by buses, operated by both government and private parties. Other than buses, Autos and taxis are also available.