This Krishna temple is located in the Alappuzha district in Kerala. It is famous for ‘Ambalappuzha Palpayasam,’ a delicious milky porridge prepared using rice, milk, and sugar. It was constructed during the 15th-17th century by Chembakasserry Pooradam Thirunal-Devanarayanan Thampuran. The main deity is Parthasarathi and is carved out of black granite stone. In its left hand, the idol holds a sacred conch and, in the right, a whip. The idol of Krishna from the nearby Guruvayoor Temple was brought to the Ambalappuzha temple during the raids of Tipu Sultan (in 1789) and kept here for 12 years. Devotees believe that even today, Guruvayoorappan visits this temple to taste the pal payasam. Ottanthullal, a great art performed in Kerala, is associated with this temple. It was first introduced by Kunjan Nambiar, a legendary Malayalam poet. 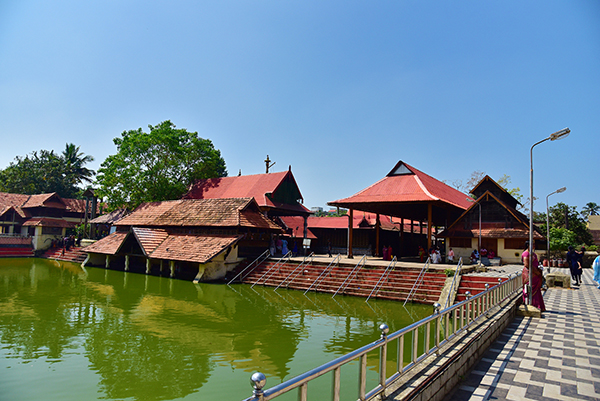 According to temple legend, the King of Ambalappuzha was a big chess enthusiast. One day, a sage challenged the King to play chess. To motivate the Sage, the King offered any reward to the Sage if he won. The Sage asked for just a few grains of rice in the following manner: The King had to put a single grain of rice on the first chess square and double it on every consequent one. The King accepted this condition, and the game started. He lost the game, but being a man of his word, he ordered a bag of rice to be brought to the chessboard. He started placing the grains according to the reward asked by the Sage, but at the 64th square, the King had to put the total number of grains, which was about 9 million trillion.

On seeing the dilemma of the King, the Sage appeared in his true form, that of Krishna. The god then told the King that he did not have to pay the debt immediately but could pay him over time. The King had to serve free pal-payasam (made of rice) in the temple to the devotees every day until the debt was repaid.

The Chambakulam Moolam water festival is an annual festival conducted on the Moolam star of the Malayalam month Midhunam(Jun- July). The flag hoisting ceremony of the Aarattu festival is held every year in the Meenam month (March-April) on the Atham star, and the Aaraattu celebrations take place on the Thiruvonam star in Meenam. Pallipana is another famous festival which is celebrated once in 12 years and performed by Velans (occultists), a community in Kerala.

The nearest airport is Cochin International Airport, which is approximately 64 kilometers away.

Alappuzha is the nearest railway station, 2 km from the temple.

Ambalapuzha is 13 km from Alappuzha. Buses, autorickshaws, and taxis are available almost all the time to reach the temple.