The Amaralingeswara Swamy temple lies in Amararama, in Amaravati town in Andhra Pradesh. It is one of the Pancharama Kshetras, located on the southern bank of the river Krishna. The principal deity is Shiva, also called Amareswara Swamy. His consort is Bala Chamundika. The temple lies on a small hammock called Krouncha Shaila in Amaravati.

History of the Amaralingeswara Swamy Temple 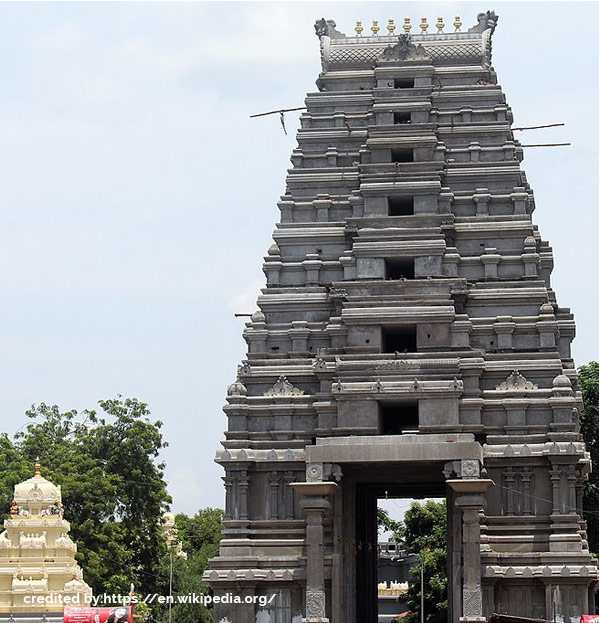 The King of Chintapalli and later Dharanikota, Vasireddy Venkatadri Naidu, was an ardent worshipper of Amareshwara. He expanded the temple and continued to renovate it. Legend has it that the King had to put down a rebellion of the Chenchus and resorted to a massacre. He became remorseful and lost his peace of mind. The King returned to Amaravathi and regained peace. He shifted from Chintapalli to Amaravathi in 1796 and devoted his whole life, time, and revenue to building temples for Shiva.

King Vasireddy Venkatadri Naidu renovated the Amaralingeswara temple and appointed nine Archakas (priests) to perform daily Archana (pooja) to God and provided them a livelihood as well as twelve acres of land to each of the priests.

Shiva was residing at Dhanyakataka with his Ganas. Legend has it that the demon king, Tarakasura, attained a boon from Shiva and defeated the Gods. The Devas lost the battle and came to reside here, and the region was called Amaravati. The war between Indra, King of the Gods, and the demon Tarakasura raged for ten thousand years. Indra lost the battle to Tarakasura and sought the help of Vishnu, who advised Indra to pray to Shiva, as the demon had attained the boon from Shiva.

Shiva was reluctant to kill Tarakasura as he was an ardent devotee. Instead, he deputed Kumara Swamy to lead the Army of the Devas. Tarakasura wore the Shiva Lingam around his neck and hence was invincible. Advised by Vishnu, Kumara Swamy used the Agni Astra to break the Shiva Lingam. When Kumara Swamy killed Tarakasura, the Shiva Lingam on the latter’s neck broke into five pieces and started re-uniting. To prevent reunification, Indra, Surya Deva, Chandra Deva, Vishnu, and Kumara Swamy, established the Lingam with great devotion. Indra, with his Guru Brahaspati, set the most significant piece and named it God Amareswara.

Shukrachrya, Guru of the demons, asked Brihaspati how he could establish the Linga here as the river Krishna would flood the region. Brihaspati explained the first piece had fallen on the mountain Krouncha Shaila that went deep into the earth and to Patala and started growing. Even if the river overflowed, nothing would happen to the place. The Krishna river even today flows north to south in the region.

The Pancharama Kshetras came into being in these five regions, where the five pieces of the Shiva Lingam broke and scattered.

The Architecture of Amaralingeswara Temple

The main deity is in the form of a Shiva Lingam, 15 feet in height. On the four sides of the temple are the large Gopurams (towers) built in the Dravidian style of architecture. The temple lies on three levels, with four pillars facing four directions.

The Amaralingeswara temple has a wealth of inscriptions on the walls left by the Kota chiefs of Amaravati. Sri Krishnadevaraya, the legendary emperor of Vijayanagara, left inscriptions on the temple walls. The wife of the minister of the Kota king, Ketaraja, left an inscription too. The Gopuram of the temple underwent renovation as it developed cracks and was renovated by King Vasireddy Venkatadri Naidu. During this renovation, they found ancient artifacts going back 1800 years in the foundation pits.

The main deity is the Shiva Lingam. People worship Shiva as Amareswara, and his consort is Bala Chamundika. The Shiva Lingam is very tall, and the Archakas have to mount a pedestal platform to reach the deity and perform daily rituals. The top of the Lingam has a red stain on it. A nail prevented the Linga from further growth. When the nail dug into the Lingam, blood began to ooze, and devotees view the stain even today.

The Skanda Purana states that at the end of the Dwapara Yuga and the beginning of the Kaliyuga, Sage Sounakadi asked Sage Narada the best way to attain salvation. The latter requested Sage Sounakadi to take a bath daily in the Krishna river, and live on the banks of the river, created by Krishna.

Sage Narada told Sage Sounakadi the story of Amareswara temple, saying that Shiva self-manifested here in the form of a Lingam to grant wishes to his devotees. He also said that one who bathed in the Krishna river and worshipped Amareswara in the temple here would be devoid of sins. The devotees who stayed at the place for three days and worshipped Shiva with devotion would attain Shiva Loka. Shiva would absorb any devotee dying here.

The temple celebrates the Maha Shivaratri that comes in the Maha Bahula Dasami, Navaratri, and the Kalyana Utsavas. Amaravati is located at a sacred spot in the Krishna river and is a consecrated place of worship and renowned in the Hindu religion.

How to Reach Amaralingeswara Temple

The nearest airport is at Vijayawada, located 56 kilometers away.

Pedakurapadu is the nearest railway station under the Guntur Railway division. Guntur is well-connected to all parts, and trains are running through South India, and touch Guntur.

The State Transport Corporation runs RTC bus services from Guntur, Vijayawada, and Mangalagiri, to the temple. Cabs and auto-rickshaws are available from the city nearest to the temple. Amaravati is 30 kilometers from Guntur’s central bus station.