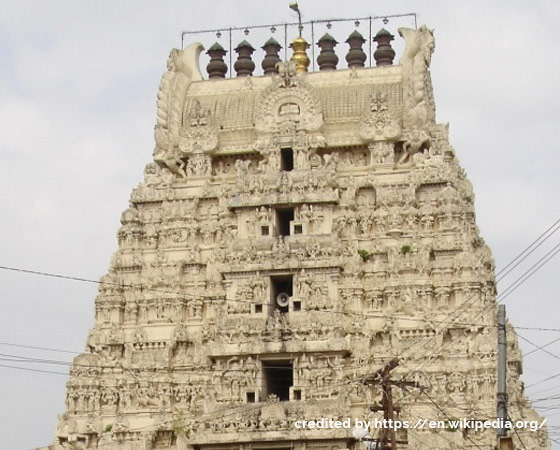 Goddess Kamakshi and Goddess Sri Lakshmi were taking bath in the Kama Koshta one day. Sriman Narayanan was hiding behind a pillar and watching them, listening to their conversation. Goddess Parvati, in the form of Kamakshi, caught him listening to their conversation, and punished him. She made him stand first, then sit and later in the Kindantha stage. Sriman Narayanan is found in all three sevas (Nindra, Iruntha, and Kidantha), on the northern side of the temple pond.

Sriman Narayanan heard the conversation without knowing them. So, Goddess Parvati named him Kalvan. The Divyadesam in the temple is called Thirukkalvanoor. This is the only Divyadesam among all the 108 where Emperumaan is seen in a tiny form of Aadhi Varaha.

According to the Sthala Purana, both Vishnu and Goddess Mahalakshmi were discussing the sins and good deeds committed by human beings. The subject later turned to beauty and personality. Goddess Mahalakshmi is very fair complexioned, and she stated that people, by having her Darshan (sacred vision), became very prosperous. Vishnu is dark-complexioned, and he did not agree with her view. He smiled and said that beauty was in the mind. People only had illusions from one’s appearance or external looks. Goddess Lakshmi did not agree with his opinion.

Vishnu became angry, and he cursed Goddess Lakshmi to become formless so that no one could see her beauty. The Supreme Goddess sought his pardon and asked him to relieve her from the curse. Vishnu directed her to perform penance at a place where it would bring a manifold benefit for a single prayer.

Goddess Mahalakshmi reached Kanchipuram and performed penance, praying to Vishnu, who granted her Darshan and returned her beauty.

Legend also has it that when Goddess Parvati performed penance under a mango tree in Kanchipuram to be reunited with Shiva, she took the help of Vishnu. Hence, there is a shrine for Vishnu in Sri Kamakshi Amman Temple.

Placed to the right of the Garbhagriham of Ambaal (moolavar sannidhi), Sri Aadhi Varaha Perumal is in standing position facing west. The Thayar of the Sthalam is Anjilai Valli Naachiyar.

Other important deities in the temple are Sri Anjaneyar and Garuda, the mount of Vishnu. The Vimanam (tower structure above the sanctum sanctorum) of the temple is called Vamana Vimanam. The Pushkarani (temple tank) of the Sri Aadhi Varaha Perumal Temple is called Nithiya Pushkarani.

The Perumal of this Sthalam is Sri Aadhi Varaha Perumal. He is in a standing position facing the west.

The Sri Aadhi Varaha Perumal temple is glorified in Nalayira Divya Prabandham, a compilation of 4,000 Tamil verses, and Mangalasasanam (devotional songs) sung by the 12 Alwar saints.

Myth has it that Vishnu was hiding in this place and came to be known as Kalva Perumal. Vishnu graces with his presence on a wall to the right of the Gayatri Mandap, facing the south-east direction. On the left wall, Goddess Mahalakshmi graces only with two hands instead of the traditional four in a worshipping form.

On one wall of the sanctum, Goddess Mahalakshmi is without any form and is called Aroopa Lakshmi. People are believed to worship this form with Kumkum (vermillion) to overcome pride due to fair complexion. Devotees worship Sri Kalva Perumal only after worshipping Goddess Aroopa Lakshmi.

The temple celebrates festivals, including the annual Chariot and Float festival in March -April, Sankara Jayanti in May-June, Vasanta Utsavam in May-June, Aadi Pooram festival in July-August, Navaratri in October, and Aippasi Pooram in October-November. The Vaikunta Ekadasi festival is the most important celebrated in the temple in December-January.

The nearest airport is the Chennai International Airport.

The nearest railway station is the Kanchipuram Railway Station. Trains for Kanchipuram are available from Chennai, Chengalpattu, Bengaluru, and Tirupati.

Kanchipuram is well connected by roads. There are frequent buses from Chennai. The temple is at a walkable distance from the Kanchipuram bus stand.