Kalimath Temple is one of the important temples located in the mountain ranges of the Himalayas. It is dedicated to Kali Mata, the fierce form of the universal mother Goddess. Situated in picturesque surroundings, the temple commands not only high religious significance, but also a lot of traditional and cultural importance.

Location of the Kalimath Temple 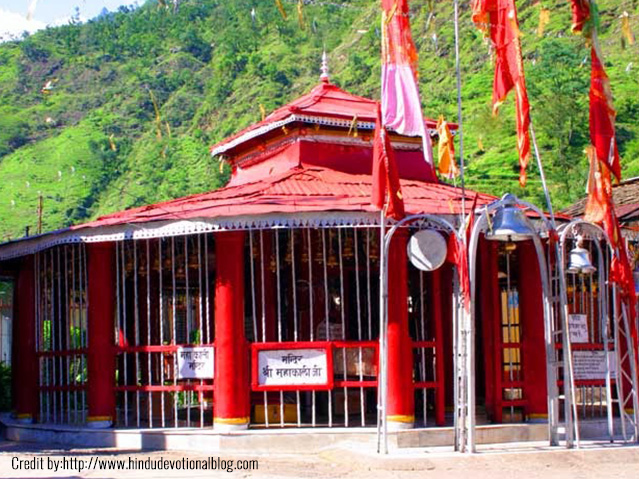 Kalimath Temple is located in the Ukhimath block of the Rudraprayag district of Uttarakhand state. Situated in the sacred Kedarnath valley, it is considered as the only Siddh Peeth present in the valley, and hence is regarded as an extremely auspicious and powerful religious centre there. The temple lies on the banks of the holy Saraswathi river, at an altitude of 6000 feet.

Legends associated with the Temple

Ancient legends highlight the importance of the Goddess here and also about the religious significance of her abode.

As per one of them, Kalimath is the place where Goddess Kali killed the mighty demon Rakthabeej. After destroying him and thus, saving the world from his atrocities, the divine mother went underground here. That sacred spot became a ditch and is always kept covered, with the help of a silver plate. This plate is removed and the ditch opened only once during the year, at the time of the annual Navarathri festival. The uniqueness of this temple lies in the fact that there is no idol of the Goddess present in the sanctum or the temple, and it is only the sacred silver plate that is treated as holy and worshipped with reverence as a symbol of the divine mother, Kali.

Another story refers to the happenings during the sacrifice performed by Daksha Prajapathi, the father of Dakshayani Devi. There, Daksha insults Lord Shiva, his own son-in-law, and unable to bear the humiliation, Sati, the divine mother kills her own self in the sacrificial fire. This infuriates Shiva, who destroys the sacrifice and starts on his tandava, the wild dance, holding aloft, the burnt body of Sati Devi. Portions of her body start falling at different places, and all those spots became very holy and are referred to, as Siddh Peeths. Kalimath is regarded as one such holy place and hence, is worshipped as a sacred Siddh Peeth.

The important aspects of worship at the Kalimath temple

Though Kalimath temple is located in the snow-covered mountains, it remains accessible throughout the year for pilgrims to come and worship. Still, the period of the nine-day Navarathri festival is regarded most auspicious for offering prayers here. Many women keep fasts during the day time, for the entire Navarathri period, as a form of worship to Goddess Nav Durga. The eighth day of Ashtami is dedicated to Goddess Kal-Rathri, a form of Kali, and assumes greater significance here. It is only on this day that the silver plate covering is removed and the sacred ditch is opened, in which, Goddess Kali is believed to be residing, even now. There is also a faith that one who, so worships the Goddess on this day, will receive her full blessings and that all his or her wishes will be fulfilled. This day is also celebrated as Kal Rathri festival or Kalimath fair, when special worship is offered to the Goddess at midnight and elaborate pujas are performed by the priests, outside the temple.

The serenity and the scenic beauty of the place, also makes it as an ideal location for devotees to undertake spiritual practices like meditation. It remains a tradition here that people who purchase vehicles in the Kedarnath valley, bring them to the Kalimath temple first and offer worship. They also display the picture of the temple or the name of Goddess Kali, in the vehicle.

There is also a temple for Goddess Lakshmi close to the Kalimath temple, where a sacred fire is kept burning. This fire is believed to be on, for the past 3 yugs, the eons or from time immemorial. The great Sanskrit poet Kalidasa is said to have meditated at this place. Kaalishila is a place, that is about 4 kilometres away from Kalimath. Here, Vrati Baba, a saint and an ardent devotee of Kali, is said to have worshipped the Goddess and meditated on her. He was also buried here later. Many people visit this place too, after their worship at the Kalimath temple.

How to reach Kalimath Temple?

This temple is located at a distance of about 230 kilometres from Delhi and is well connected by roads. Starting from Delhi, people can drive to Haridwar (220 Kms), then to Rishikesh (25 Kms), subsequently to Rudraprayag (139 Kms) along the Badrinath route and finally to Guptakashi or Kalimath (50 Kms), through the Kedarnath road.