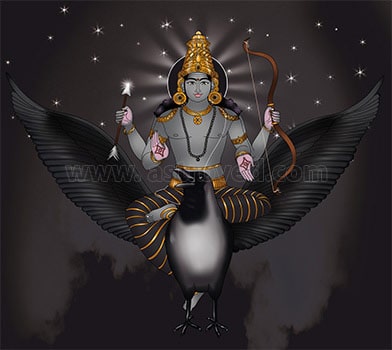 Saturn or Shani is a slow-moving planet. In astrology, Shani is the keeper of our karmas and deeds and gives us the fruit of them accordingly. Shani is considered black in color; in Hindu mythology, he is the son of Surya and Chhaya. Shani teaches us patience and dedication; he offers the fruit of our efforts. Since Shani moves slow, he knows no shortcuts and teaches a person the lessons as per his karma.

Shani's fruit in the past lifetime gets depicted in the current lifetime. If one has always done good deeds, he gets rewarded accordingly. Shani's dosha and sadesati are such long-term affairs. People consider Shani a punisher or one who destroys the native's mental peace and progress. However, Shani can be a great teacher too if we learn from its punishments and improve ourselves. It is also said that if one person doesn't learn the lessons required, Shani doesn't leave you, and he harasses you in your horoscope in the next lifetime.

Thus individuals who have Shani dosha in their chart should understand that you need to excel in some aspects of your life and implement those learnings to overall improve your life.

Shani's mount is considered a vulture, and the planet is lame because he has injured legs. Saturn's eyes are not considered good; hence many people don't look into Saturn's eyes while offering him oil. It is said that Shani should not confront you; devotees often offer the oil from the side rather than the front.

Those who suffer from the curse of Shani should have the Shani Beej Mantra. The powerful mantra, if revered with devotion and continuity, can remove the malefic effects of Shani from our life. To make it more effective, the Shani Beej Mantra can be combined with Shani's 108 Names, Shani Dash Namani Stotram, Shani Chalisa, Narasimha Stuti by Shani Dev, Shani Mala Mantra, and Shani Gayatri Mantra.

Shani Dosha refers to the wrong positioning of Shani in your horoscope. Shani takes such as position in the natal chart when the individual had done bad karmas in his past life. Such a person undergoes many struggles and suffers his karma in his current birth.

Sade Sati is Shani's cycle for seven and a half years. As a result, the person goes through many difficult situations in life until the period ends. A person faces a lot of challenges in various fields, and the results are malefic.

Indeed Saturn remains a great teacher and purifies a person by burning him in the fire of his karma. However, when the period ends, a person comes up as an improved soul who is more determined, hardworking, and hopeful toward a bright future.

During such phases, chanting the Shani Beej Mantra helps a lot. One can also go through Shani Shanti Puja that is offered by many professional astrologers.

The Power of Beej Mantra

In Vedic astrology, chanting the Beej Mantra broadens the horizons of our mind using the powerful sound vibrations of the mantra. Also, when you chant the Shani Beej Mantra regularly, you give your time to invoke Lord Shani, which in return provides you with his grace.

The Beej Mantra even helps when you have no Shani Dosh in your horoscope. Doing so, Shani always ensures that you don't go through any difficulties in life and have the fruit of your every single effort.

While reciting the Beej Mantra, it is important that one has devotion in heart and believe it to work. Only when one has faith, he succeeds in what he does.

Mantras are a way to bring the mind and body in balance. When both of these aspects come in balance, they work perfectly well, which brings harmony to life.

The mantra in itself is like a sound therapy where the vibration of each word works to soothe and purify the soul. When one's mind is rejuvenated, he doesn't feel any mental imbalance or emotional stress which allows him to perform rightly in every aspect of his life.

Reciting the Shani mantra at least 108 times every day brings the grace of Shani in our lives. One can initiate the chanting on Shukla Paksha Saturday. If chanting 108 times is not possible, you can also chant it 1, 3, 9, or 27 times.

Additionally, feeding the crows also appeal to Shanidev and brings you closer to his blessings.

Saturn is the most dreadful planet among all the other planets. While he transits to your zodiac,

Each day your life encounters meaningful and meaningless coincidences that you have attracted.