Usha is regarded as the Goddess of the dawn. The Vedas holds her as the personification of the light and charm of sunrise. She is also the divine mother, who precedes light, marking the end of the dark night and the beginning of the bright day. 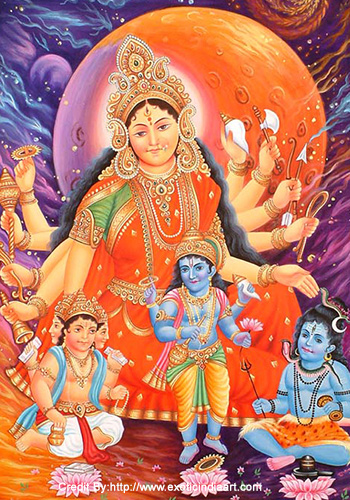 ‘Usha’ is a Sanskrit word which literally means ‘Sunrise’ or ‘Dawn’. The ancient Rig Veda paints a beautiful picture of the breaking of the dawn and the emerging of Usha. It hails Usha as a new born, who remains as the harbinger of light and hope to the mankind, unfailingly, day after day. Goddess Usha is regarded as a symbol of auspiciousness, is associated with light and wealth, and is treated as an object of worship somewhat similar to a sacred cow.

The Portrayal of Usha and references about her

Usha is regarded as the daughter of the heavens, sister of the night, consort of the Sun and the mother of the Ashwins, the Vedic Gods and she arrives everyday riding a chariot drawn by her sons. She is simply glowing and is well adorned. Though considered shy and delicate, she is believed to be a graceful dancer. She is also highly popular as the precursor to the day, as it is Usha who leads the Sun into throwing his glance on the earth and thus, reveal his immense power and warmth to the beings of the world. The sacred Vedas refer to her more than 300 times and celebrate her greatness in as many as 20 hymns. As per them, she drives away darkness and banishes the evil spirits represented by it. She thus removes inertia, galvanizes people into action and sets things in motion towards positive outcomes.

Usha is ranked as a divinity in her own right. She is regarded as a celestial Yogini, a form of Goddess , who is held as spiritual as a Devi or even more. Being a sort of a Yogini, Usha is also a feminine divinity who awakens the nobility from the inner most depths of the human soul. She is the force that propels even the Gods into action. As the mother of the Ashwins, she is also worshipped as the Shakthi, the power that can heal, give boons, bestow Siddhis, the accomplishments and bless people with immense knowledge and grace.

Usha is also the embodiment of the descending, early morning sunrays, referred to as dawn. She also represents the Usha Kaal, the time just before and around the daybreak, that is considered very auspicious. As the one who brings in a fresh day on to the earth, her rays of the early morning light emit on us great energy and warmth, and introduce us to our own true reality, as transcendental consciousness. Goddess Usha is regarded as one, who can satisfy the longings of the worldly beings, add strength and enliven their spirits. She is worshipped by sages, ascetics and commoners alike, for bringing in light and removing darkness, and also for bestowing a long and purposeful life.