‘Padma’ refers to lotus flower and ‘Vathi’ means resemblance. Padmavathi thus denotes the one, who resembles the lotus in her beauty. Lakshmi is the Goddess of wealth and fortune, and is also known as ‘Shri’, the embodiment of auspiciousness and prosperity. Padmavathi, as Lakshmi’s incarnation, has taken as her principal abode, the very heart of the Lord himself and this is the reason, the Lord himself has got the name Shrinivasa – Shri Nivasa – that is, the Nivasa, the place of residence of Shri, Goddess Padmavathi. 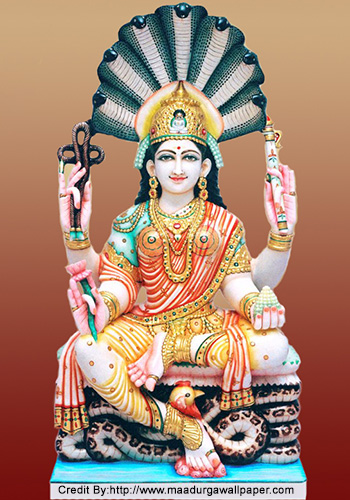 The divine couple once decided to descend on Earth for the good of the world and enacted a drama for this purpose. Sage Bhrigu, who visited their place of stay Vaikunta, then, got irritated over a petty issue and in a fit of rage, touched the Lord Vishnu’s chest with his foot. While the Lord himself took this on his stride, Lakshmi, who was residing in his heart, felt seriously offended by this grave disrespect shown to her. Aggrieved, she left her consort and the heavens and came down to earth. Unable to bear the separation of his dear spouse, Lord Vishnu descended on the Venkatadhri hills in Tirupathi region as Shrinivasa and started doing penance there.

When Akasha, the childless king of the area near the Tirupathi hills performed a ritual for getting a child, a lotus in full bloom emerged out of the earth, holding in it, a baby girl, shining in golden colour. Supremely pleased with the divine gift, the king named the lotus-born baby, as Padmavathi. And she was none other than Goddess Lakshmi herself. In due course, the girl grew into a remarkably beautiful maiden and her parents started looking for a suitable groom for her marriage.

However, princess Padmavathi, who ventured into the hilly forests one day, happened to meet Shrinivasa and the divine couple who had only a brief separation, fell promptly in deep love with each other. Though initially unwilling to marry his daughter to an unknown forest-dweller, the king relented later due to the divine will, and Lord Shrinivasa and Goddess Padmavathi got united in a marital bond, in the presence of all the Gods and other celestial beings, in a grand marriage ceremony.

While Shrinivasa took his abode on top of the seven hills, known commonly as Tirumala hills, as Lord Venkateswara, his consort began residing in her own temple in a nearby place called Alamelumanga Puram (Tiruchanur), named after her name, Alamelu Mangai.

Goddess Padmavathi is seated majestically holding lotuses in her two upper hands, while her lower ones are in the protective Abhaya mudra and the boon-giving Varada mudra postures.

People in very large number visit the temple of Goddess Padmavathi right through the year, perform various rituals for propitiating her and offer sincere worship. The annual festival of Brahmotsavam is also celebrated with great enthusiasm in the month of Karthigai (November-December), when the processional deity of the Goddess is taken around the temple in various mounts amidst the prayers of thousands of people. The divine marriage of Lord Shrinivasa and Goddess Padmavathi is also celebrated daily in the temple, with all the rituals. A famous temple of Padmavathi Devi is also there in Hobuja, in the state of Karnataka. Devotees believe that the grace of the Goddess can protect them from various problems and bless them will all the goodness in life.