Indrani, as the name suggests, is the consort and queen of Indra, the Lord of the Devas and the God of thunder and lightning. She is a divinity referred to in the holy Vedas. Rig Veda, the ancient text speaks highly about her great beauty. Indrani is also known by many other names, Shachi being the most famous of them. Shachi is said to denote Shakthi, the power and Indrani is considered a powerful divine being. She is also called by the names Aindri, Mahendri, Pulomaja and Poulomi.

Indrani is portrayed as a woman of incomparable beauty, whose charm virtually no one could resist. With everyone longing intensely for her, she became an object of jealousy and heartburn for many and hence, she has come to be regarded as the Goddess of Jealousy and wrath. Her exquisite eyes too have come in for special praise. Contrary to many other Goddesses, she has an independent character of her own. Also, unlike many godly consorts, who take their names from those of their husbands, like Varuni from Varuna, Saranya from Surya etc., it is Indra, who is often referred to as ShachiPathi, the Lord or husband of Shachi or as ShachiVat, Shachi’s possessor. Indrani, the ‘endless beauty’, was very dear to Indra indeed. She also mothered many children like Jayanta, Jayanthi, Midhusa, Nilambara etc. Chitragupta, the well-known and feared aide of Lord Yama, who is said to keep a meticulous record of our good and bad actions, is also her son only. 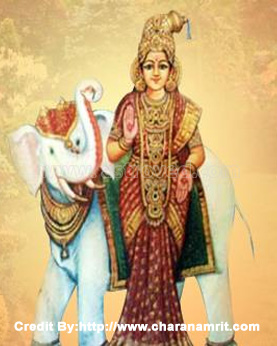 There is no dearth of mythological accounts about Indrani. As the wife of Indra Dev, she forms part of many legends that speak about the various happenings in respect of Indra. She was born to Puloman, an Asura, who was actually killed by her future husband Indra. Indrani is regarded as the first Shakthi, the personification of feminine might, and the originator of the great concept of powerful female consorts, which developed subsequently into Shakthi worship.

The most interesting legend concerning her is perhaps the story of Nahusha. Once Indra had to flee from his kingdom and hid elsewhere on account of his sin of killing a Brahmin. King Nahusha, who seized power and began ruling the heavens, became arrogant, developed a strong desire for possessing the beautiful Indrani and began making immoral advances towards her. Alone and helpless, she sought refuge from some sages, who advised her of a plan to end Nahusha’s tyranny and restore the heavens to her husband. Accordingly, she told a pestering Nahusha to come to her in a special palanquin carried by the great sages. Mad with amorous desire, Nahusha did so immediately. When the short statured Agastya could not move fast carrying the palanquin, Nahusha touched the great sage with his feet and goaded him to proceed quickly, with the words ‘Sarpa, Sarpa’, Agastya cursed the impertinent king to become a ‘Sarpa’, that is, a serpent himself. Nahusha turned into a snake at once and fell down from heaven. Indra too completed his atonement for the sin, got back to his dear wife and also obtained the kingship of heavens, thanks to the great efforts of Indrani.

Indrani is also depicted as the female shadow of Indra, who has similar characteristics and the same mount, the famous white elephant, Airavata. Indra is also said to have blessed her with immortality.

Indrani is a Godly form, and though born in the clan of the demons, is virtuous, pure, kind and remarkably beautiful. She is also regarded as one of the Sapta Matris or Sapta Matrikas, the seven divine mothers. Hence, though not normally worshipped as an independent deity, she is worshipped with fervor as part of these mother Goddesses. She also remains as a significant and well worshipped Astral Spirit, especially in the southern parts of the country. A puja dedicated exclusively to Goddess Indrani is performed during Ashada Navaratri time and is believed to bestow devotees with welfare and good life.