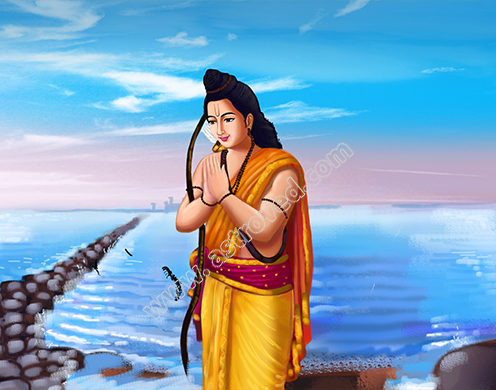 Lakshman is the younger brother of Lord Rama, one of the ten significant incarnations of Lord Vishnu. Lakshman himself is regarded as the incarnation of Adisesha, the serpent couch of Vishnu and also as the one-fourth manifestation of Lord Rama.

Lakshman is also one of the principal characters in the sacred epic Ramayana, who plays a significant role in the life of Rama and right through the narrative. He is virtuous, courageous, heroic and devoted, and comes across as a self-sacrificing ideal brother.

Lakshman is depicted as a handsome young man and prince, wearing a crown, adorned with flowers and ornaments, and carrying a bow and arrows. He is normally seen in the company of Lord Rama, his consort Sita, and Rama’s devotee Hanuman.

Lakshman was the son of Dasaratha, the king of Ayodhya and his queen, Sumitra. While the four brothers - Rama, Bharath, Lakshman, and Shatrugna, though born to three different mothers, remained quite close to one another. Lakshman’s bonding with Rama was extremely close right from the beginning. While Rama married Sita, Lakshman married her younger sister Urmila. When Rama’s crowning as the king of Ayodhya did not take place as planned, due to trickery, Lakshman flew into a rage. When Rama was exiled to the forests for fourteen years, Lakshman readily accompanied him to the jungle, leaving his wife and sacrificing a life of royalty and luxury. There he did great service to Rama and Sita with complete devotion, even erecting hermitage for their stay and comfort. It is said that he never slept for the full fourteen years, as he kept vigil guarding them against dangers.

There, the mighty demon Ravana’s sister Surpanaka approached Rama and then Lakshman for marrying her, and when they refused, she tried to harm Sita. Lakshman intervened and cut her nose off, as a punishment. This infuriated Ravana, who tried to trick them and abducted Sita by pulling the brothers away from her. Lakshman had the prudence to see through the game of the demon and warned the others not to fall prey, but was forced to give in ultimately by their obstinacy. Lakshman’s fears came true, as Sita, who was alone in the hut, was carried away by Ravana and kept a prisoner in his capital city of Lanka. Like a father, Lakshman consoled the desolate Rama and provided him with all emotional support, as they went in search of Sita. On locating her after a tremendous search, Rama and Lakshman marched to Lanka leading an army of apes, took on the mighty demon army. Lakshman showed great valor, as he battled heroically along with his brother, against the enemy forces. Showing exemplary skill in archery, he fought and killed Indrajit, the immensely powerful son of Ravana, thus turning the war in their favor. The brothers ultimately won the battle with Rama killing Ravana, and they returned to their capital triumphantly, where Rama was crowned as the king. In due course, Lakshman and Urmila were blessed with two sons, Angad and Chandraketu.

Lakshman’s life of sacrifice continued until the very end. Once, he was put in a delicate position, when the short-tempered sage Dhurvasa demanded entry into Rama’s private chamber, where the king was in a confidential discussion with Yama, the God of death. As the sage threatened to destroy the entire country with his curse, if not permitted to meet Rama immediately, Lakshman himself went in to inform his brother about the sage’s demand. In the process, to save the country from the curse, Lakshman knowingly violated his brother’s command that none should enter his chamber then and if anyone did so, he would be put to death. Thus, willingly paying the price with his life, Lakshman proceeded to the banks of River Sarayu, did penance and gave up his life, and returned as Adisesha to his heavenly abode.

Thus, by his noble qualities and exemplary character, Lakshman rose to be an object of veneration and worship.

Temples have been erected for Lakshman at some places, where he is worshipped as a deity. There is a grand temple with fine architectural features for him at Khajuraho in Madhya Pradesh. Sree Lakshmana Perumal temple, another famous temple for him is located at Thirumoozhikalam in Kerala, where prayers are offered to him. On Rama’s birthday – Rama Navami, Lakshman is celebrated and worshipped along with his brother Lord Rama and his consort Sita.