Who is Goddess Kanaka Durga?

Durga is the supreme Goddess Adi-Parashakthi herself. The term Durga means ‘the invincible’. She is the embodiment of all shakthis, the great powers and remains the prime female deity of the Hindu pantheon. Kanaka Durga is an important form of Durga. ‘Kanaka’ in Sanskrit means gold and Kanaka Durga is the Goddess Durga who is shining like gold. She is eternal, with no beginning and end, and is regarded as Swayambhu, the one who has manifested on her own.

What is the legend associated with Devi Kanaka Durga?

Mythology speaks highly about the advent and the exploits of the Goddess. Once a number of demons performed penance for pleasing the Gods and obtained many boons. Mahishasura was the chief among them. He had the face of a buffalo and already possessed tremendous strength. He did severe penance towards Lord Brahma, and got from him various boons, which made him almost invincible. The most important of the boons that he obtained assured him that, if at all he was killed, that can only be by a woman. Thus, fully armed with many blessings and well protected by boons, he played havoc on the Universe and also on Heaven, committing unspeakable atrocities on human beings and the Devas. The Gods were helpless, as only a woman could pose any serious challenge to the demon and it was left to the divine feminine powers, to intervene and put an end to his crimes. In order to save the world, the compassionate divine mother incarnated as Kanaka Durga, fought a fierce battle with Mahishasura, his fellow demons and his army, and at last killed him, thus ridding the world of his cruelties.

There is also another legend, which states that a sage named Indrakila prayed to Durga very earnestly for protecting the people from Mahishasura and other demons. The Goddess was moved, incarnated as Kanaka Durga and annihilated Mahishasura and his henchmen. The grateful sage then pleaded with the Goddess to stay on earth, and continue to bless the world and the people. And for facilitating this, sage Indrakila himself took on the form of a hill and the obliging mother made that mountain itself as her earthly abode. Thus Kanaka Durga is residing and is enshrined principally in the Indrakila mountain.

Which is the most important temple for Goddess Kanaka Durga and how is she depicted? 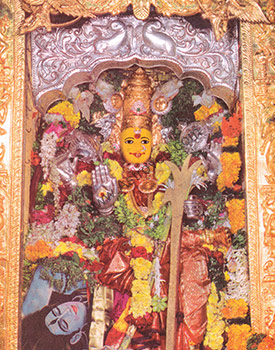 The greatest of her temples is located atop the Indrakila mountain, in the present day town of Vijayawada in Andra Pradesh. Also called Indrakeeladhri, the hill is located scenically on the banks of river Krishna. Ancient scriptures like Kaalika Purana and Durga Sapthashathi have spoken about this Goddess and her abode in Indrakeeladhri.

The deity of Kanaka Durga is in the form of a 4 foot high idol. She has eight arms, and holds various weapons like conch, discus, sword, trident, bow and arrow etc. in them. She is seen standing over Mahishasura, the demon whom she vanquished and is piercing his body with her Trishul, the trident. She looks extremely pretty, glittering in shining ornaments and bedecked with flowers. There are also depictions of the Goddess as seated majestically on her Lion mount, at other places and in shrines at other locations. Her consort Lord Shiva can also be worshipped as Malleswara Swamy, in a shrine close to the Durga temple.

Navratri and Vijayadasami are celebrated as big festivals here, when the Goddess is believed to have fought the demons and killed them.

The Goddess is believed to protect her devotees from the ills and dangers of the world, and bless them with health, wealth and happiness.

Durga Pooja helps invite Goddess Shakti into your life to get rid of hitches, promote longevity & lead a happy and contented life.

This Yantra radiates the unflinching energy of Durga to overcome your struggles & enemies and bring you in the limelight.