Sabarimala: What are Makara Vilakku and Makara Jyothi

It is believed, even by many of the ardent Ayyappa devotees, that both these terms – Makara Jyothi and Makara Vilakku, refer to the same phenomenon. But the fact is that these are very different.

It is really worth knowing the difference between the two in some detail, and that is going to be a fascinating exercise. 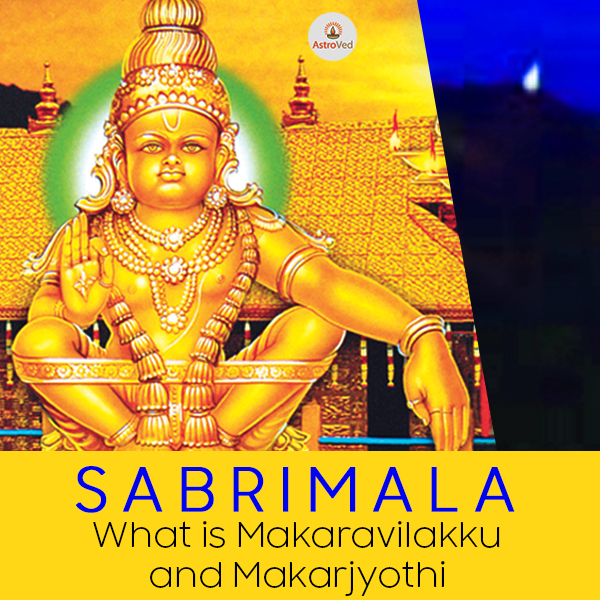 The word ‘Makara’ or Makaram can stand for 2 things. Makara denotes the 10th of the 12 zodiac signs and is called as Capricorn in English. Makaram also represents the 6th Malayalam month, which extends from mid-January to mid- February, starting from the 14th or 15th of January.

Now let us get to know about their significance individually.

Makara Jyothi is nothing but star Cyrus that shines bright in the sky on the first day of the Makaram month. This first day of Makaram usually falls on the 14th or 15th of January and coincides with the auspicious occasion of Makara Sankranthi. This Makara Jyothi is generally seen in the sky around the sunset time, to the south of the Sanctum of Sabarimala Ayyappa temple, after the deeparadhana worship is done to the deity.

But in fact, this star appears daily in the sky above the mountains during that period. But it is only on the 1st day of Makaram that the ornaments of Ayyappa are brought to the temple by the members of the Panthalam royal family. So the devotees believe that the star that shines during that particular time above the temple represents Lord Ayyappa himself, and worship the light as the divine Makara Jyothi.

Shortly after the Makara Jyothi darshan, a brilliant light appears in the mountains that lay on the opposite side of the temple. This is believed to be the place where the divine beings and sages reside. And it is the arti worship that they do to the Lord that is seen as this brilliant light. This light is known as Makara Vilakku. The long austerities observed by the devotees and the Makara Jyothi pilgrimage they undertake to Sabarimala conclude after witnessing this Makara Vilakku.

But is Makara Vilakku a divine miracle or a supernatural phenomenon, after all? No, this light is only the result of human activity.

The Reality of Makara Vilakku

The place where this light appears is called Ponnambala Medu, and that is at about 4 kms from the Ayyappa temple. Tribal people are living there, where there is also a temple. When the Cyrus star-Makara Jyothi appears in the sky, these people light a flame using ghee and camphor and wave it around the idol 3 times in circles. It is this light that is seen in and around the Sabarimala Ayyappa temple as Makara Vilakku.

That Makara Villakku is purely ritualistic worship done by the tribal people using fire and flame, and there is no supernatural factor involved in it has been categorically asserted in the court of law itself.