Saptashrungi Devi temple is a Hindu pilgrimage site situated 60 kilometres from Nashik in the Indian state of Maharashtra. The goddess Saptashrungi Nivasini is believed to dwell within the seven mountain peaks located in Nanduri, a village near Nashik. There are 108 water bodies located in vicinity of these hills and there are several villages located at the foot of the hills. Also, herbs of medicinal value are known to proliferate in the lush green forests of this area.

The temple is considered one among the 51 Shakti Peethas and is the place where the right arm of Sati, Lord Shiva’s consort fell on Earth. It is also popularly known as the three and a half Shakti Peethas of Maharashtra. The Goddess is said to be the very embodiment of Shakti (power) itself and an Avatar of Goddess Durga. She is also known as Brahmasvarupini and is reported to have appeared from the Kamandalu of the God Brahma. The temple can be approached from various points and devotees can make their way along the path which is convenient for them. The shrine is a major pilgrim and tourism center and draws crowds from all faiths and religions from all over the world. 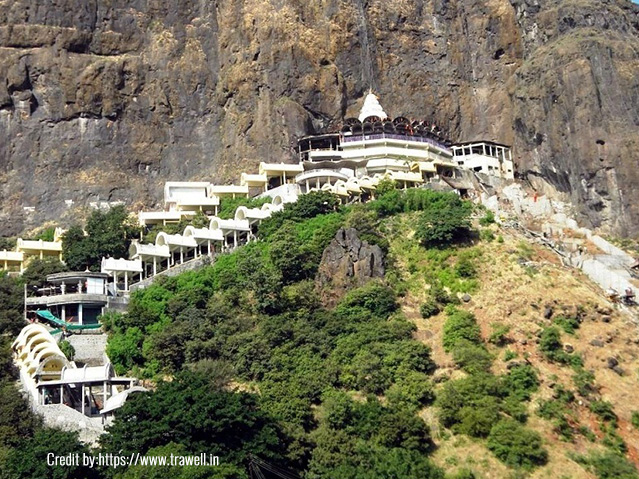 Saptashrungi Devi is the Goddess who slew the evil demon Mahishasur, who took the form of a buffalo. The head of a buffalo made of stone and believed to be that of the demon is found at the foot of the stairs leading to the temple. It is also believed to be the place where sage Markandeya, scripted the book Devi Mahatmya in honor of the Goddess.

In the Hindu epic Ramayana, Lord Hanuman had come in search of medicinal herbs to save Lakshman who was lying unconscious after being felled by Inderjit, Ravana’s son. It also mentions that Lord Rama, along with Seetha and Lakshman came to these hills to seek the Goddess’ blessings.

When Goddess Sati burnt herself alive in the sacrificial fire, Lord Shiva was enraged and placing the body of Sati on his shoulder, he commenced the Tandava dance. This terrified all the deities in Heaven and they urged Lord Vishnu to intervene. Using his discus, Vishnu cut Sati’s body into several pieces and the pieces fell to Earth. The place where Sati’s right arm fell is believed to be the site where the Saptashrungi temple is currently located.

The Saptashrungi Temple is a vast two storied shrine with the image of the Devi enshrined in the top floor. The image is believed to be Swayambhu (seld-manifested) and appears to be carved out of the sheer rock face of the mountain. The Goddess is depicted with eighteen arms, each wielding a different weapon. The image of the Goddess is approximately eight feet tall, adorned with many ornaments and also smeared with vermilion powder.

Her attire is changed by the priests every day and Abhishekam is performed regularly. Several renovations of the temple have been carried out over the years and various facilities have been developed to accommodate the large number of pilgrims who come for a Dharshan of the Divine Mother. A community hall and a gallery for devotees to gather and assemble have been built and about five hundred steps leading to the temple have been carved out of the rock for the convenience of the devotees. Images of Rama, Hanuman, Radha and Krishna, Dattatreya and Tortoises adorn the steps leading all the way to the temple premises.

The uniqueness of the Saptashrungi temple is the carvings of the images of several Gods and Goddesses while ascending to the shrine. The main deity is carved out of the sheer face of the mountain which speaks volumes of the craftsmanship of the builders. Every facet of the shrine is an architectural marvel and reflects on the artistic skills of the designers and planners.

The Chaitra festival which starts on Rama Navami is celebrated with great fervor in the Saptashrungi temple. Hundreds of thousands of people attend the festival seeking the blessings of the Goddess during the nine-day festival. Many walk from Nashik (60 Kilometersaway) and neighboring towns to participate in the proceedings. Dussehra and Navratri are major festivals which are celebrated with pomp and gaiety in the temple. Shukla Paksha Dashami, Gudi Padwa, Gokulashtami, Navratotsav and Kojagiri are other festivals celebrated here. Several tribal festivals with singing, dancing and music are also held here and people revel in the festive mood during these times.

Benefits or Blessings of the primary deity- Saptashrungi Devi

Many people visit the temple to pray for progeny to carry on their lineage and many women take part in the festivities to attain the blessings of the Divine Mother. Women having trouble conceiving make a bee-line to the Saptashrungi temple and offer worship to the Devi to bless them with child.

Location – How to reach Saptashrungi temple

The Saptashrungi Devi temple is located approximately 60kms from Nashik in Maharashtra. A well- developed road network links the temple to all major cities of Maharashtra.

Location – How to reach the Saptashrungi temple

By Flight: The nearest Airport is located in Nashik city city which is about 60 kilometres away. You can catch a taxi from the Airport to take you to the temple.

By Rail: Nashik is the nearest railway station and well linked with other major cities of India by rail. Taxis and buses are available outside the station to take you to the temple.

By Bus: There are regular buses plying from major cities of the country to Nashik city.

Local Transport: Several state operated buses ply from Pune and Mumbai to Nashik. One can reach the temple by taking taxis or auto-rickshaws to Saptashrungi temple.

There are also Dolis to carry one up, but these are a little costly. It’s okay for handicapped and children.