Thirupampuram Temple is dedicated to Lord Shiva and Goddess Parvati. It is situated in the town of  Kumbakonam in South India. This is popularly known as Thirupampuram Rahu Ketu Temple, which is located on the southern banks of river Cauvery. The word Pambu refers to Snake or a Serpent in Tamil, thus the name signifies the connection of this town with serpents. The town of Thirupampuram is also called as Urakapuram and Seshapuri.

Lord Shiva is worshipped as Pambunathar, and Goddess Parvathy is worshipped as Piraisodi Amman. This is one of the “Paadal Petra Stalam”, which refers to the temple which receives the sacred song, rendered by Nayanmars, who are ardent devotees of Lord Shiva. Sage Thirunavukarasar, one of the Nayanmars sang Thevaram in this temple. This temple is highly revered by Sages like Sage Agastya and was worshipped by Lord Brahma. The town of Kumbakonam is filed with a lot of temples, and this temple invites people from all over the world.

History and Legend of  Thirupampuram Temple: 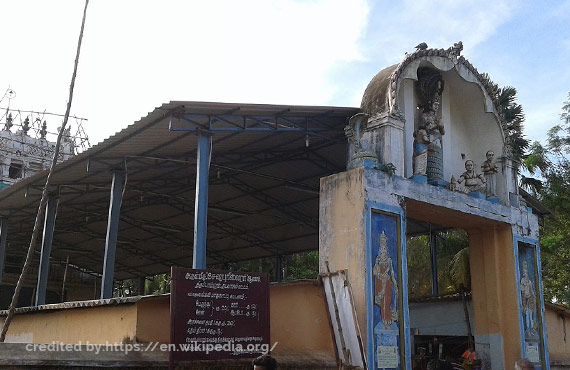 This temple is highly revered and is connected with several legends. Lord Shiva was worshipped by Nagarajan, who is referred to as the kings of Serpents. Once, along with Nagarajan, Karkotakan, a prominent serpent was worshipping Lord Shiva also. Lord Vinayaga used to worship Lord Shiva every day, and Nagarajan mistakenly thought that Lord Ganesha was worshiping him along with Lord Shiva. After knowing this, Lord Shiva became furious and cursed Nagarajan to lose all his powers. Thus the entire serpent community prayed in the town of “Kudanthai” for redemption. Thus the town got the name  Pampuram, where there is a strong connection between the serpent clan and the town of Kumbakonam. It is to be noted that the town Kudanthai is also called as Kumbakonam.

The architecture of  Thirupampuram Temple:

The temple is built in the Dravidian style architecture and believed to be more than 3000 years old. Lord Shiva is said to be Suyambu, who was self-manifested. This temple is considered as the 59th Tevara Stalams of Chola empire. The temple is in a huge complex and has big halls with long corridors. The pillars intricately care with images of Gods, and animals like elephants, horses, and Yali. There are separate shrines for Lord Shiva, Goddess Parvathy, and Rahu Ketu. There is a huge temple tank, where the holy water is used for sanctification and other ceremonies of the temple. Many people take a dip in this temple tank with devotion.

There are several festivals celebrated in this temple. Masi Magam and  Arudra Darshan are prominent here. Maha Shivaratri is highly revered here. Apart from these festivals, Pongal, Tamil New year, and Deepavali are also celebrated with devotion. This temple is highly sacred, and the mystical force draws a lot of devotees.

Praying to Lord Raghu Kethu in this temple will remove the malefic effect of this planet. This temple is one of the “Parihar Stalams”, where remedies are performed here. People here pray to get the remedy for the delay in getting married, trouble-free conjugal life, childlessness, ill-effects of Kala Sarpa Dosha and Sarpa Dhosha. This town is highly special as there is no record in history till the date of people has died of a snake bite. Mystical effects of snakes are felt in this town, where it is believed that worshipping the serpents would bring positive effects in life.

How to reach  Thirupampuram Temple

Tiruchirapalli International Airport is the nearest airport to this temple. It is advisable to take a train from Trichy or Chennai can go through busses. Private cabs and cars would be faster.

Thanjavur railway junction is the nearest railway station, where it is connected by plenty of local transports. There are several private vehicles, which can take the devotees to the nearest destination.

Buses Available from Kumbakonam, which is in 8kms from this temple. Local transports drop very near to the temple. The roadways offer huge connectivity.