Keezhperumpallam Temple is well known as a Kethu Sthalam, a special place of worship of Ketu Graha, the planet Ketu. This is actually a temple dedicated to Lord Shiva who is enshrined here as Naganatha Swamy. His consort Goddess Parvati is worshipped here as Soundarya Nayagi. This temple is located in southern Tamil Nadu, not far from the Bay of Bengal. 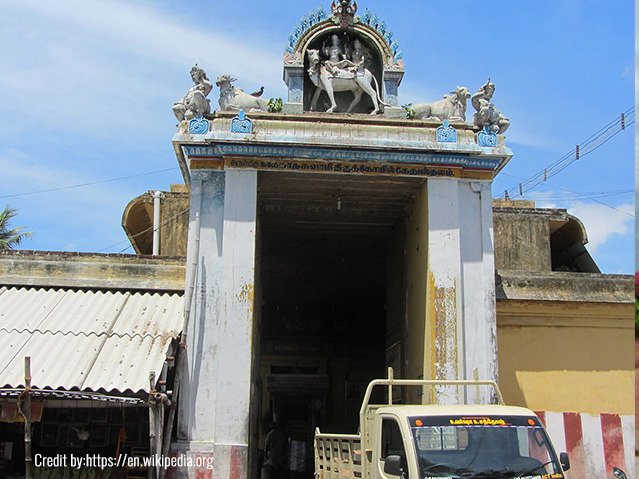 There are nine planets in our solar system which are believed to cast strong influences in the lives of the people. These planets are known as the Nava Grahas and Ketu is one among them. Ketu is considered a headless half planet or as the tail of the snake, whose head is Rahu. Unlike other planets, Ketu, as also Rahu, doesn’t really have a physical existence. He is actually the southern lunar node, the southern point of intersection of the orbits of the Sun and the Moon. Hence Ketu is regarded as a Chaya Graha, the shadow planet.

It is believed that Ketu will make people experience very difficult times and learn from it, and hence is known as Gnana Karaka, the one who provides wisdom through tough experiences of life. He is said to kindle spiritual tendencies and non-attachment towards worldly affairs. He is thus not a provider, but a liberator. Astrologically, Ketu denotes electronics, maternal ancestors, spiritual orientation, occult sciences, arts of healing and superstitions.

Once, the Devas and the Asuras joined hands and churned the ocean of milk, using the Mandara mountain and Vasuki, the great serpent, for obtaining Amrut, the elixir of life. When the Amrut emerged from the ocean at last, Lord Vishnu appeared as Mohini, the bewitching beauty and began distributing the divine nectar to the virtuous Devas and thus, denying it to the wicked Asuras, who remained simply enchanted by Mohini’s charm. However, one of the Asuras realized what was happening, slipped quietly to the ranks of the Devas and managed to drink a little of the Amrut. Noticing this, the Sun and the Moon cautioned Mohini and she immediately chopped the body of the clever demon into two halves with the ladle in her hand. But, still the Asura survived as two entities, thanks to the effect of the immortal liquid.

Subsequently, his head part got attached to the body of a snake and that became Rahu. The body portion of the demon is said to have fallen in the Podigai mountain, where it attached itself to the head of a snake. This form, with the snake’s head and the Asura’s body, became Ketu and is worshipped as Ketu Bhagavan. Rahu and Ketu are said to take revenge on the Sun and the Moon, who revealed their identities to Lord Vishnu , by swallowing and releasing them at times and mythology links the solar and lunar eclipses with these events. They are also believed to have prayed to Lord Shiva for clearing their sins and became planets with his blessings.

Keezhperumpallam Temple and its Worship

Keezhperumpallam used to be known as Vanagiri in olden times. Lord Shiva in the Lingam form as Naganatha Swamy is in the sanctum, while his consort, Soundarya Nayagi can be worshipped in a separate shrine. In the very important separate shrine in the temple, Ketu Bhagavan can be worshipped. With the head of a five-headed serpent and the body of a demon, Ketu is seen here with folded hands, worshipping Lord Shiva. He looks divine in this posture of salutation.

Ketu is regarded as a malefic planet who rules losses, separations and distress. He can be all the more destructive if his position is inauspicious in anyone’s horoscope. He can weaken the potency of the position he occupies and negatively impact the planets who remain associated with him. These can lead to poverty, enmity, poor health, loss of reputation and impediments to efforts. Devotees believe that worshipping Lord Ketu in the Keezhperumpallam temple will get for them his compassion and protect them from the planet’s negative effects. It is also believed that Naga Dosham, Ketu Dosham and marriage related problems can get cleared or their effects lessened by Ketu’s grace.

There is the belief that Ketu gets pleased with offerings like multi colour cloth, horse gram grain (Kollu) and white lilly flowers. Hence, devotees offer these items and worship him, seeking his grace. Abhishekam, the sacred bath, is also performed for the idol. There is also a belief that Ketu Bhagavan can be propitiated by worshipping Matsya Avatar of Lord Vishnu and people offer prayers accordingly.

How to reach Tali Temple?

Keezhperumpallam temple is in a remote place, about 2 kms from the coastal village of Poombuhar and can be reached only by road. It is also about 23 kms from Sirkazhi, 30 kms from Mayiladuthurai, and 64 kms from Kumbakonam, which are all well connected by rail. The nearest airport is Trichy, which is about 144 kms away.