The Durga Temple located in Aihole in the state of Karnataka in India, is an ancient medieval era temple. Even though its name suggests it is a temple dedicated to the Mother Goddess Durga, the name actually alludes to ‘Durg’ which means protector or a fortress. It does feature a Durga sculpture but is dedicated mainly to both Lord Vishnu and Lord Shiva , equal representatives of the holy trinity of Hinduism, along with Lord Brahma . Numerous images of Shiva and Vishnu can be found in the temple and it is a brilliant tribute to the religious and spiritual life of Karnataka. This impeccably maintained temple complex is under the aegis of the Archaeological Survey of India and is also in the pending list of UNESCO World Heritage Sites. It is a popular pilgrim and tourist center attracting scores of visitors from all four corners of the Globe. 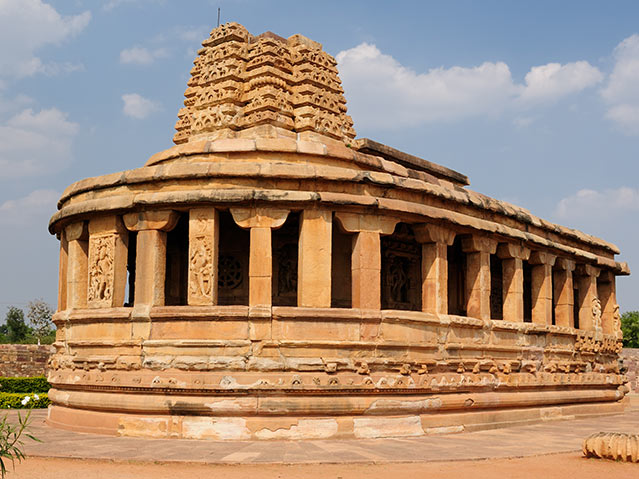 Several historical events can be attributed to the Durga temple in Aihole and it was built sometime between the 7th and 8th century by the Chalukya Dynasty. Many factors also suggest that It once served as a part of the fortification of the Marathas sometime after that.

This magnificent temple is famous for many prominent features and forms a quadrilateral shape. The distinctive shape of the shrine is in Gajaprasta style, indicating it was built in the contours of the rear portion of an elephant. Numerous pillar reliefs are a hallmark of the structure and it also depicts a Buddhist Chaitya which features intricate carvings.

The sculpture of Goddess Durga in the temple is a splendid piece of work and speaks volumes of the brilliant workmanship prevailing in those days. An exquisite sculpture of a seven headed serpent is carved on the ceiling of the Durga temple and the walls are replete with sculptures of various Hindu deities. One of the several rooms in the shrine is the Garba Griha (Sanctum Sanctorum) where the spiritual essence of the temple is palpable. The two main pillars along with an elevated plinth and the high galleries form the other unique characteristics of the shrine.

Other notable features of this impressive temple are the finely sculpted images of Lord Narasimha , Goddess Chamundi and Lord Shiva .

The Durga temple in Aihole is considered an architectural marvel and the presence of numerous pillar reliefs indicate the brilliance of the Chalukyan era. Built in an oblong apsidal shape, the corridors encompass the heart of the shrine. The construction of the temple is suggestive of Indian traditional architecture in the Dravida and Nagara styles, and its unusual shape is reminiscent of the early Buddhist style of building.

The Durga temple in Aihole is a prominent heritage site rich with culture and visitors come from far and near to admire the magnificent architectural features of the temple. Currently, no worship is conducted in the temple and no festivals are celebrated here.

The temple is accessible by various modes of transport:

By Air: The nearest airport to the Durga Temple of Aihole is located in Belgaum, around 189 km from the temple. The city of Hubli which is about 104 km away has an Air Force Base Airport.

By Road: Aihole is easily accessible from the major cities of Karnataka by road.

By Rail: The Railway Station is the Hubli- Sholapur meter gauge line, which is around 34 km away.

By Bus: Several buses ply from the nearby cities and towns to the temple in Aihole.