Introduction about the Chamunda Devi Temple

The Chamunda Devi Temple is a sacred Hindu shrine located in Kangra district in the scenic Indian state of Himachal Pradesh. Situated on the banks of the Baner River, this shrine is dedicated to Chamundi Devi, an Avatar of Goddess Durga. The temple is also widely perceived to be the holy abode of Lord Shiva and Shakti. There are also images of Lord Hanuman and Bhairav within the temple. The Devi here is a fierce from of Goddess Durga, the supreme Mother Goddess. She is at the same time known to be kind to devotees who pray to her sincerely. The Goddess worshipped here assumed a fearful form to slay the evil demons Chanda and Munda and thus, she was also conferred the moniker Chamunda. Due to this, the temple is also commonly referred to as 'Chamunda Nandikeshwar Dham'. The shrine is a popular pilgrim and tourist center which attracts thousands of devotees from India and all over the world. 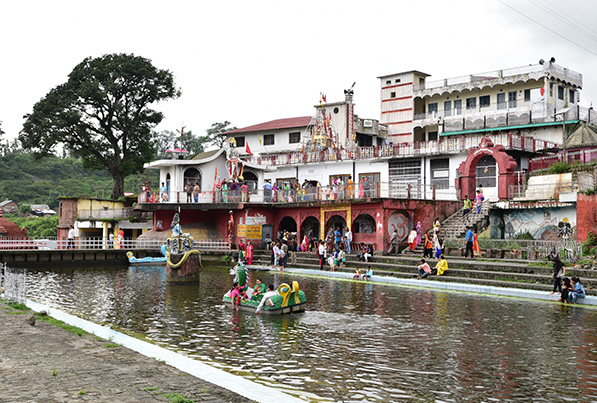 History of the Chamunda Devi Temple

Legend behind the relocation of the Temple

The temple is believed to be at least 700 years old, and around 400 years ago a King and a Brahmin priest worshipped the Devi to seek her approval for re-locating the charming Image of the deity to a more accessible location. The Goddess is said to have appeared in a dream to the priest and accorded him permission to do so. According to the dictates of the deity, digging was commenced at a certain spot and a beautiful Idol of the Goddess was uncovered. With great delight and reverence, they proceeded to lift the Idol, but found they could not do so. The Devi again appeared before the priest and requested him not to consider the Idol as an ordinary stone. He was told to lift it with a pure body and mind, which he did accordingly and to his amazement, was successful in lifting the stone Idol. He, then, reverently placed it with due respect within the present temple to be worshipped.

Significance of the Chamunda Devi Temple

Worship of Chamunda Devi is a daily ritual and Aartis are performed periodically in honor of the deity. Reciting the sacred Hymn ‘Shat Chandi’ with deep reverence in the temple is considered an auspicious ritual and is said to amplify the effects of the sacred chants. One can also view the little footsteps of the Goddess on a stone in a corner of the temple. Just beside the main shrine is an ornate marble stairway, which leads to a cave devoted to the worship of Lord Shiva. Within a cave like scoop, a captivating Shivalinga representing Shiva is placed and worshippers flock here here with deep devotion to pay obeisance to the Lord. Shiva is believed to be the destroyer and restorer of the Universe and is present here as a symbol of death and destruction. The presence of a cremation ground in the close vicinity of the temple which serves the villages nearby, adds credence to this theory. .

The Idol in the main temple is considered extremely sacred and even the staunchest of devotees are denied access to touch. It is always kept out of reach and concealed in a red cloth. The temple has inscriptions from the Devi Mahatmiya, Ramayana and Mahabharata adorning the walls. There is a huge pond located within the premises where people can take a dip before entering the sacred confines of the shrine. There is also an imposing sculpture of the Goddess garlanded with serpents, scorpions and skulls within the temple complex. The lush green mountainside surrounding the premises adds an ethereal ambience to the temple and many saints can be seen meditating and doing penance.

The temple also houses an Ayurvedic dispensary, library and a Sanskrit college, which can be accessed by anyone.

Architecture of the Chamunda Devi Temple

Even though there is nothing strikingly extraordinary about the architecture of the temple, a divine aura pervades the shrine and its surroundings, which attracts devotees like a spiritual magnet. The image within the temple is clearly visible from the main entrance. The Goddess draped in red, is flanked by Hanuman and Bhairav, and those who witness this captivating sight are spellbound by the magnificence and beauty of these celestial deities.

The temple is a beehive of activity during the Navratri and an air of joyfulness marks these occasions. The religious and spiritual fervor prevailing during this auspicious period is marked by scenes of revelry all around, with people rejoicing in the festivities. Pilgrims from all over visit the temple to participate in the proceedings and seek the blessings of the Divine Mother.

Location – How to reach the Chamunda Devi Temple

The Chamunda Devi temple is around 10 km west of Palampur and around 15 km from Dharamshala. One can reach the temple by air, rail and bus.

By Air: The nearest Airport is Kangra Airport in Gaggal, around 28 km away.

By Train: The nearest Rail line is at Moranda, some 30 km away.

By Bus: Palampur is well connected with neighboring towns and cities by bus service.

Local Transport: Taxis and state transport buses are available to take one to the temple.