Yamunotri temple is a famous Hindu temple dedicated to Goddess Yamuna and is located in the Uttarkashi district of Uttarakhand. The temple is the origin of the Holy River Yamuna and is one the Chota Char Dham circuit of Uttarakhand and is one of the significant pilgrimage sites visited by many pilgrims. The temple is situated opposite to the Yamunotri glacier and is perched at a height of 3150 m above sea level. Yamunotri temple is known for its calm and serene surrounding which attracts many tourists, trekkers, theologizes and naturalists from around the world. 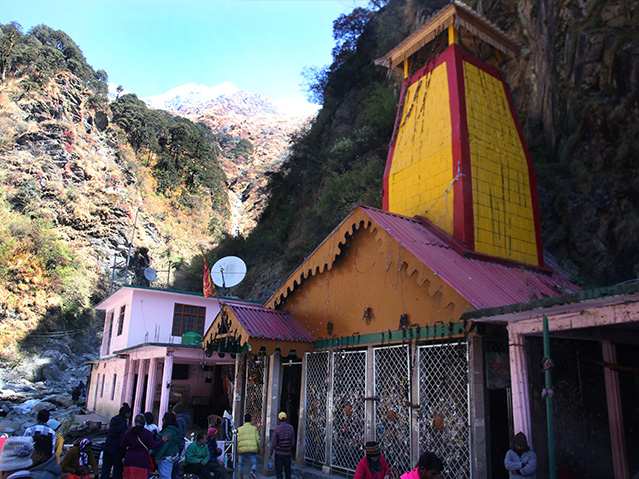 The original Yamunotri temple is believed to be constructed by Tehri Naresh Sudarshan Shah in 1839, which was destructed during an earthquake. Later Maharaja Gularia of Jaipur rebuilt the temple during the 19th century.

According to a legend, Sage Asti Muni in his early life took bath daily in the Rivers Ganga and Yamuna. Later when he turned old, he was unable to reach Gangotri, and impressed with his religious beliefs, Ganga emerged as a small stream next to River Yamuna to help him continue his rituals.

Yamuna Devi is believed to be the daughter of Surya Devta and Saranyu Devi who is the Goddess of perception. Yamuna is also the sister or Lord Yama, God of death and is called by the name Yami, who later became the consort of Lord Krishna. A legend describes Yamuna to be very playful in nature, owing to her mother cursed by Lord Surya for blinking her eyes, unable to look at his excessive radiance.

The “Yamunotri Mahatmya” of the Skanda Purana acts as a major source of history and mythology for the priests here, based on which the daily poojas and rituals are conducted.

Yamunotri temple represents the origin of the sacred river Yamuna. The actual source of the river is a frozen glacier called as Champasar glacier, at an altitude of 4421 m. From this region, a Kund or Lake appears which is known as the Sapta Rishi Kund. Trekking to this place is extremely difficult, but it’s worth a visit as this is the spot where the sacred flower, ‘Brahma Kamal’ blooms once a year during July – Aug. The flower has divine significancein Hindu Mythology. It is believed that the white stamen of the flower represents Lord Krishna and the reddish stalks are believed to the 100 Kauravas. It is also believed that Lord Shiva replaced the head of Lord Ganeshawith an elephant head using Brahma Kamal.

There is a common belief that the color of the river is black because it has engrossed the pain and sorrow of Lord Shiva after the death of his wife Sati.

Yamunotri Temple is constructed in the Nagar style of architecture with granite stones excavated from the surrounding mountains. The temple has a main conical shaped minaret, pale yellow in color with bright vermilion border. The main deity Yamuna Devi is installed under the main minaret. The idol is made of polished black ebony marble with exquisite carvings.

As described in the ancient scriptures, the idol of Yamuna Devi is seated on a tortoise in the sanctum. A standing idol of Goddess Ganga made of white stone is beside her. There is also a Mandap or assembly hall to accommodate the pilgrims. The core chamber or Garbagriha also houses a silver idol of Goddess Yamuna which is 1 feet tall and adorned with many garlands. All the offerings and rituals are made to the silver idol at the temple.

Yamunotri is one of the Chota Char Dham temple circuits of Uttarakhand. Various Puranas such as Padma Purana mention that taking a holy bath in the River Yamuna washes away the sins of an individual and grants Moksha or salvation. A ritual is a must for all the pilgrims to cook a handful of rice and potatoes in a muslin cloth at the hot water sulfur spring of Surya Kund. This is considered as a “Prasadam” or offering which is meant as a spiritual cleanser.

How to reach Yamunotri Temple

By Air: The nearest airport to the Yamunotri temple is the Jolly Grant Airport at Dehradun, 210 km from the temple. Regular flights are plied by Air India, Spicejet and Jet airways from New Delhi and Lucknow.

By Train: The nearest railway station is Dehradun (175 km) and Rishikesh (200km). Regular trains are available from cities like Delhi, Mumbai and Chandigarh. From the stations, Hanuman Chatti is accessible by road.

By Road: Buses are available from major cities in Uttarakhand like Rishikesh, Tehri, Barkot, Dehradun, and Uttarkashi to Hanuman Chatti.