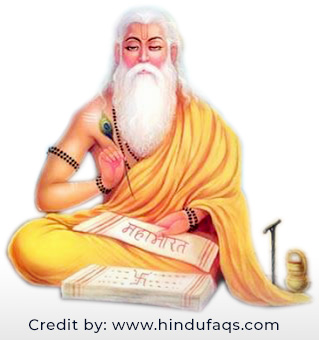 Sage Vyasa is the author of the great Saga, Mahabharatha. He is also the author of great Vedas and Puranas. He is considered as the “Guru of Gurus”. It is believed that he is the incarnation of Lord Vishnu, who ascended from heaven above in the Dwaparayuga to propagate Dharma and righteousness. He also had a lot of students and among them, Umantu, Vaisampayana, Jaimini and Paila are noted ones. Many people believe that sage Vyasa is not just one person, but a lot of saints born time and then, whose main duty is to establish dharma.

Sage Vyasa was born to Sage Parashara and Satyavati Devi in an island on the banks of river Yamuna. He was born with a dark complexion and hence was named as Krishna. He was born on an island and was known as Dwaipayana.In his previous birth, he was born as Sage Apantaratamas, when Lord Vishnu, uttered the word “Bhu”. He is endowed with several mystical powers.

Sage Parashara was an expert in astrology and has even composed a book Parashara Hora, which is even relevant and widely used today. He was the son of Sage Vashistha. Sage Parashara’s book Parashara Smriti is one of the renowned texts. His mother Satyavati was the daughter of Dusharaj, a fisherman. Sage Parashara performed severe austerities towards Lord Shiva and gained a lot of boons.

It was believed that Sage Vyasa was born immediately after Sage Parashara met Satyavati Devi, while he wanted to cross a river. Sage Parashara offered a mantra as a token of his gratitude. She immedietly recited the Mantra and got a child. He immediately attained adulthood and gained his knowledge from four Kumaras, Narada and Lord Brahma himself.

He is called Veda Vyasa, as his contributions towards Literature are tremendous. He made Lord Ganesha as his scribe. According to the Legends, Lord Ganesha broke his trunk to write Mahabharatha when the Sage Vyasa was dictating him, the fabulous Literature. When he was young, he performed “Akhanda Tapas”, a continuous penance or meditating in the forest, to gain a lot of knowledge. Initially, his mother disapproved, but later the sage convinced his mother, that he would appear whenever she needs him.

Sage Vasudeva was the guru of Sage Vyasa. Sages Sanaka and Sanandana and others taught him the holy scriptures and divine couplets. It was only Sage Vyasa who segregated and collated all four Vedas for the benefit of Humanity. He composed Brahma Sutras, which are the Guides for learning for the quick and Shrutis.

Mahabharata was written to enhance the knowledge of Dharma, the righteousness among the people. He wrote 18 Puranas and initiated ‘Upakhyanas’ or discourses, a new method of teaching. he rendered the Karma, Upasana (devotion) and Jnana (knowledge), are the supreme goal of every soul to attain salvation. He composed Bhagavatam under the instigation of Sage Narada, the son of Lord Bhrama. Thus his entire life is devoted to patronize Vedas, and other holy literature, which are considered as the greatest asset of Hinduism.

Guru Purnima has a lot of significance, connected with Sage Vyasa. The word “Gu” denotes ignorance, and “RU” suggests remover. Thus the word Guru denotes the person who removes the illusion. It was the day when Sage Vyasa was born. This day is a symbol of an unending bond between Guru (Teacher) and Sisya (Student). This usually falls during Asahd month and is given great respect for their Gurus.

To honor the great Saint, a temple has been built in Kalpi, Orai, Uttar Pradesh. This temple is known as Shri Bal Vyas Mandir. The contributions of Sage Vyasa is amazing and is unfathomable. He has set the path for humans to reach immortality, and the soul reaches the greatest divine state, where there is no return.