Narada is a great Indian sage who is popular with both Gods and human beings. Popularly known as Narada Muni, he is closely associated with the Vedic age and enjoys an iconic status in Hinduism. He is also widely referred to in various Hindu religious texts including the Ramayana and Bhagavat Purana. Narada is believed to be the son of ‘Brahma’ and an ardent devotee of Lord Vishnu, with the words ‘Narayana’ and ‘Hari’ always on his lips which are different names of Lord Vishnu. He is believed to be always on the move, flitting across all the realms of the Universe. Believed to be the originator of the Bhakti Yoga, Narada is entrusted with carrying out several tasks on behalf of Lord Vishnu . Narada is also considered one of the wisest of Sages, but at the same time attributed with carrying tales which sometimes create conflicts between people. 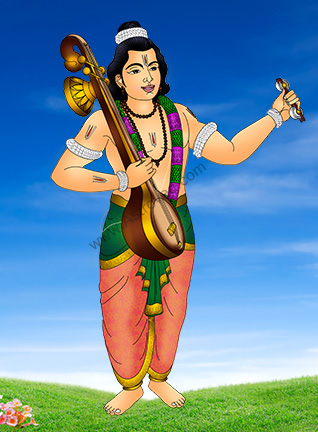 Narada is generally portrayed wearing simple Indian clothes like a dhoti, in the style of an ascetic. A garland of beads adorns his neck and the sacred thread of Hindus is worn around his shoulder and waist. He is always shown with a ‘Hartal’ and ‘Veena’, both Indian musical instruments which he uses while singing the glory of Lord Vishnu. Narada is also sometimes portrayed receiving the sacred Hindu teachings called Bhumavidya from the illustrious sage Sanath Kumar. He is also shown bowing down to his favorite deity ‘Lord Vishnu’ who sometimes appears before him in the form of ‘Viraat Swarupa’.

How Narada came to be associated with Vishnu

Narada is highly regarded in the sacred Hindu text ‘Bhagavat Purana’ which portrays him as the conveyor of messages and information to and from the Gods. Narada was born to serve Lord Vishnu and attained this status due to severe penance and meditation. He is believed to have retired to a forest and worshipped Vishnu with total devotion and dedication. Eventually, the Lord appeared in his vision and blessed him, whereupon Narada devoted his whole life to praying and worshipping his favorite deity, ‘Vishnu’.

Narada was a pragmatic sage and decided not to indulge himself with the affairs of the material world. He instead focused his entire attention on serving Vishnu in the celestial realm where time and space did not exist. This did not fit in with the scheme of things and Lord Brahma was incensed with Narada’s attitude. Brahma wanted that Narada live in the material world to gain an insight into the theory of ‘Brahmanda’ which conceptualizes and associates everything with the cycle of birth and death. Hence, Narada had to undergo life for some period on the Earthly plane to understand the meaning of pain and suffering in the material world. 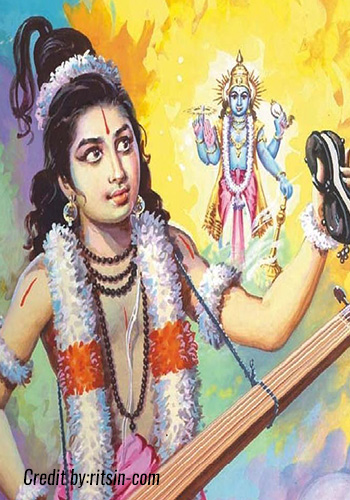 Narada also considered himself to be the greatest devotee of Lord Vishnu, but was dumbfounded when he was told that he was not; and that a simple farmer living on Earth held that distinction. He wanted an explanation from the Lord, who assigned him a simple task to prove his loyalty. When Narada undertook the test, he was totally immersed in seeing it through without any disturbance, and focused his entire attention on doing so. Lord Vishnu reminded him that even when one is completely immersed in carrying out their worldly duties, one should also be devoted to God.

Narada is perceived as a wise and learned Heavenly sage who enjoys access to all the Celestial beings. He is also considered to be a partial manifestation of God and worshipped with great reverence. Some temples in India adore him as the primary deity and Poojas are carried out on a regular basis. The Sri Narada Muni temple at Chigateri in the Indian state of Karnataka is a prominent and popular pilgrim center. There is also a place called Korva which is named ‘Naradagadde’ in honor of the sage. Narada is well versed with sacred Hindu texts like the Vedas and the Upanishads. He also possesses through knowledge of various Hindu rituals, ceremonies and religious rites. He is said to be a repository of wisdom and knowledge, which is acknowledged even by the Gods; and plays a vital role in propagating this knowledge to all beings. He is considered to be an exponent of arts and music, while also symbolizing devotion, faith, and reverence. Lord Narada also possesses a unique sense of humor which greatly endears him to Gods and humans alike.