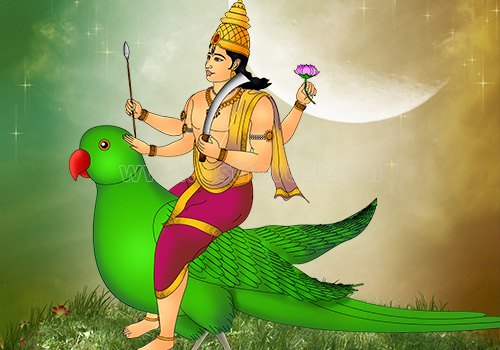 Kamadeva is a unique God, for he is the God of love. Kama means desire, longing or love, and Deva is a God or divinity. Rig Veda, the most ancient of the Vedas makes a mention of his name. He is also referred to in many other names, which include Manmatha, one who agitates or churns the heart, Ananga, one who is non-physical or formless, and simply, Kama, the embodiment of desire. Known as cupid in English, Kama rules mainly over sensual and physical love. He is extremely good looking and has an equally beautiful Rati as his female counterpart, lover, and wife.

Kamadeva is usually depicted as a very handsome, young man with green skin. He too wields weapons, which are as loveable as his form itself. He holds a sugarcane bow that is tied to a string of honeybees. His arrow is also equally unique, made up of and decorated with five types of fragrant flowers - Ashoka, white lotus, blue lotus, jasmine, and mango flower. His companion and consort Rati remains the personification of desire, having her frame and limbs slender like lotus stalks. She is considered as the daughter and born out of the sweat of Daksha, the Godly figure. She also carries a lotus flower and a discus.

Vedic texts and ancient scriptures narrate many stories about Kamadeva, but most of them differ from one another. Some regard him as the son of Lord Brahma, the God of creation, while some others take him to have risen from the creator’s mind. As per another version, Kamadeva is considered the son of a divine being called Dharma, who himself was born out of the right breast of Brahma. While some others take him to be the son of Shree, that is, Goddess Lakshmi, other texts relate him to Lord Vishnu . A few show him to be serving Indra, the Lord of the heaven. It is believed that when Kamadeva shoots an arrow at someone, the target would immediately be consumed by passion and shall fall madly in love.

The burning down of Kamadeva by Lord Shiva remains the most well-known incident concerning the God of love.

Once, Lord Shiva was in deep meditation, totally unaware of the surroundings and the happenings of the world. Taraka, a demon was causing immense harm to the Devas and others, at that time. As he cannot be defeated by anyone other than by a son born to Shiva, the celestial beings, wanted desperately to kindle the feeling of love in Shiva’s heart, so that he can unite with Parvati and that their union can produce an issue, who can then kill the demon and put an end to his atrocities. Indra, the lord of the Devas, directed Kamadeva to generate the tender feeling of love in the heart of the meditating Shiva. Kama approached Shiva, who was lost in contemplation and shot his irresistible flower arrow at him. The disturbed Shiva was awakened, and in his anger, opened his third eye and the flame that emerged out incinerated Kamadeva completely and reduced him to ashes.

Kamadeva thus paid with his life for his thoughtless action, but still succeeded in what he intended to achieve. His arrow did arouse strong desire in the heart of the Lord, who then united with Parvati, for the good of the universe. Consequently, Lord Karthikeya was born to them, who then went on to kill Taraka and other demons, and saved everyone from their clutches.

However, shocked by the fate suffered by her loving consort, Rati pleaded with Shiva to show mercy, as Kamadeva did what he did, only at the behest of the Devas and that too, for the common good of the world. Parvati also joined her. Shiva was compassionate and brought Kama back to life, however with the condition that he would remain without a body and shall be visible only to his dear Rati. Kamadeva thus survived without form and came to be referred to as Ananga, the one without limbs or the body.

Mythology also believes that he was reborn as Pradyumna, the son of Lord Krishna and Rukmini.

Kamadeva sacrificed himself for the good of the world and hence is regarded respectfully as archetype Kamadeva, the Godly entity. Besides, he is believed to continue to create feelings of desire and love in living beings, so that they could enjoy the finer things of life, produce offspring, continue their lineage and thus sustain the universe.

Mythology says that it was Parvati, who requested Kamadeva to awaken Shiva from his meditative trance, which ultimately resulted in their union. It was on the fifth lunar day of Panchami in the Magha month (January-February) when she approached Kamadeva, and this event is celebrated as Vasant Panchami.