Introduction about the Osian Temples

Osian is an ancient city located on the edge of the Thar Desert in the North-Western Indian state of Rajasthan. Located close to Jodhpur, the city is home to a myriad Hindu and Jain temples. The city once housed over a hundred temples, but the onslaught of time has rendered most of them to ruins and now only a handful of about 18 temples remains. 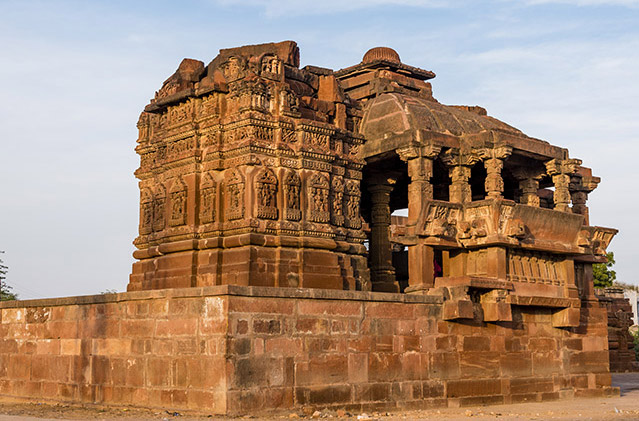 It was once a major religious center of the Kingdom of Marwar and a trading center dating back to the Gupta period. However, the town was ravaged and desecrated by the armies of Mohammed Ghor in 1195. Today, Osian is a very important Pilgrimage site for the Oswal Jain community and attracts visitors from far and near.

History of the Osian Temples

Many believe Osian was founded by Utpaladeva, a Rajput Prince belonging to the Pratihara Dynasty, and the city was named Ukesha or Upkeshapur in those days. It is still revered as a major religious and cultural center of the Mewar kingdom and a prominent place of pilgrimage during the 8th and 9th century. After the attack by hostile Muslim invaders, most of the residents fled, never to return again.

Significance of the Osian Temples

The Surya or Sun temple, along with the Kali Sachiya Mata temple and main Jain temple dedicated to Mahavira are the prominent structures of this group of 18 shrines still left standing. An analysis of the various temples is mentioned below:

The Mahavira Jain temple was built in 783 A.D by the Pratihara king Vatsa. It is dedicated to Bhagawan Mahavira-the 24th Jain Tirthankara and considered as an extremely important pilgrimage center of the Jain community. This imposing shrine is renowned for its remarkable style of construction and considered a marvel of architecture.

The entry door is replete with images of young maidens and the main porch houses intricately carved pillars. The main shrine is on an elevated platform made of sandstone and the Sanctum houses an Idol of Lord Mahavira. The three balconies in the main hall allow the breeze to flow in and keep the place well ventilated.

The Sachiya Mata temple was built sometime during the 8th century, but the present structure is believed to have been constructed during the 12th century. The temple is dedicated to Sachi Mata, the wife of Lord Indra, the Rain God and king of the Heavens. Shrines dedicated to Mata Chandi Devi and Amba Mata are also within the temple premises. Beautifully sculpted arches lead to the inside of the temple, which is replete with images of various Hindu deities. An imposing sculpture of Lord Vishnu in his Avatar as Varaha graces the site in the north of the temple. An image of Vishnu-Lakshmi is placed in the east. Several sculptures of Hindu deities also adorn the western side of the shrine. This temple is a masterpiece of construction and definitely worth seeing, especially for its medieval architectural style.

The Surya temple dates back to the 10th century and the structure is so well designed that it is often compared to the Sun temple in Ranakpur. It is dedicated to the Sun God Surya and the Sanctum houses an awesome Idol of the deity. Idols of Lord Ganesha and Goddess Durga are also placed in the main hall. The ceiling is impressively decorated with images of serpents coiled around lotus flowers. One can also find several murals and scriptures in the temple.

Three magnificent temples of Osian are dedicated to the Gods, Vishnu and Lord Shiva, who are depicted as one single entity, Harihara. Built on a raised platform, these shrines are full of remarkable sculptures. They are believed to have been built in the 8th century, but are slightly different from the earlier structures in style and architecture.

Location – How to reach the Osian Temples

Osian is a highly popular Jain pilgrimage center and frequented by numerous visitors. Several modes of transportation are available to take one to this culturally rich town.

By Air: The nearest Airport is in the city of Jodhpur, which is about 70 km away from Osian.

By Train: Several trains link Osian with the rest of the country and the nearest Railway Station is in Jodhpur which is around 70 km away.

By Road: Osian is well connected to neighboring towns and cities by road.