Mangadu Kamakshi Amman Temple is located in Poonamallee, Chennai, and it is more than 2000 years old. This temple is dedicated to Goddess Kamakshi. Mangadu in Tamil denotes the Mango Grove. It is on this temple, where Goddess Kamakshi, performed her penance to marry and reunite with Lord Shiva. She performed severe austerities, where all 32 types of Dharmic rituals were performed here by the goddess. Though this is a Saivite shrine, this has idols of Lord Vishnu In this shrine. Lord Vishnu holds the Prayoga Chakra on his right hand, which is a very unique factor.  Many sages and revered people visited this shrine and attained greater pedestal in spirituality. People across various parts of the world would come to this temple to gain divine bliss. 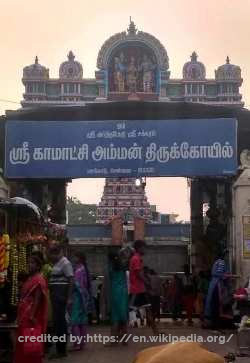 The idol of Sri Aadhi Kamakshiamman was installed by Sri Kanchi Paramacharya. A lot of people across the globe visit this temple to get their wish fulfilled. Devotees should carry 2 lemons and come for consecutive six weeks to this temple. After the pooja, one of the lemons is returned back to the devotee. This is believed that Kamatchi Amman is coming in the form of lemon to cure our ailments and help us in our life.

The temple of Mangadu Kamakshi Amman Temple is constructed in the Chola style of Architecture. The Raja Gopuram was recently added, which is south-facing. It has 7 tiers with great sculptures on it. The Chakram installed by Adi Shankara is still very famous here. The Goddess is holding a parrot in this shrine, which is very unique and highly famous. The temple has a sanctum of Lord Ganesha here. Various other Deities like Surya, Lord Shiva, and Lord Vishnu are also installed here.

This shrine is famous for people who practice Tantric penance and meditation. This temple is highly powerful for people to offer their prayers. People come here to pray for Marriage, childbirth. The belief upon this temple has been growing period, and people across the globe come to visit this shrine. As the deity appears with a crescent moon, it is highly auspicious for children appearing in exams, or job aspirants come and offer prayers before their interviews. Once the wish is fulfilled, they come and offer a saree to the Goddess.

The best way to reach Mangadu Kamakshi Amman Temple by air is to reach the Chennai Airport, which is a National and Internationally connected.

The nearest Railway station is Pallavaram railway station. There are numerous trains that connect the station from various parts of Chennai.

The nearest bus stop to the temple is the Mangadu Bus Stand, near the Poonamallee bus stand. There are a lot of buses that connect Poonamallee with the rest of Chennai, and other parts of Tamilnadu.