Maha Nandiswaraswamy Temple is a temple dedicated to Lord Shiva, which is believed to be more than 1500 years old. This temple is one of the Nava Nandi Darshan Yatra. It is situated in the town of Mahanandi, Kurnool district, Andhra Pradesh. This temple houses a big statue of Nandi, the divine bull and the vehicle of Lord Shiva. It has many unique features, and one among them is the perennial holy water gushing beneath the Lingam. The inscriptions found in the temple show that the shrine was repaired and renovated over the years of Chola, Chalukya, and Vijayanagara rule. 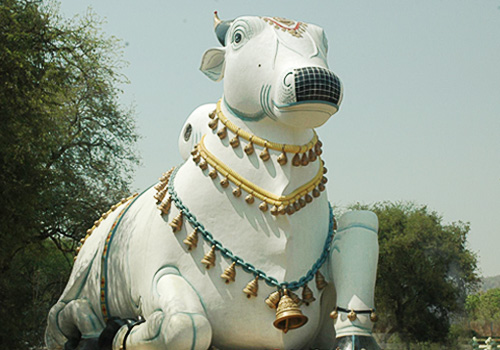 It is believed that Nandi did meditation here when he was a young boy. Lord Shiva was moved by Nandi’s devotion and granted him the great privilege of staying with him in Kailash. Another interesting story is that the divine cow’s milk, which is used for the hydrating ceremonies, was revered and celebrated even by the King of that land. The divine cow was worshipped with devotion. It used to graze in the meadows and forests often. The King noticed that the quantity of milk was reducing day by day. He followed the cow to find the true reason and found that the cow was automatically releasing milk on an anthill. The King was taken aback and got his men to dig the anthill. To his surprise, he found that a Shiva Lingam was beneath the anthill. The cow was shocked and left its footmarks on the Linga when the King tried to chase the cow. The King realized his mistake and built a temple in the same spot. Even today, the marks made by the divine cow can be seen.

The beautiful temple of Mahanandishwara stands as the testimony to the time and exhibits the architecture of both Chalukya and Vijayanagara style. There are tiered gopurams or towers. One at the entrance, which is completely decorated with enormous sculptures and carvings, leaves the spectators awestruck and filled with wonder over the minutest and splendid carvings. The temple houses a Nandi, which is tall, magnificent and attracts the attention of everyone who visits this temple. The temple tank is called Kalyani, which is considered highly sacred and has a good supply of freshwater. The idol of Lord Shiva is Swayambhu or self-manifested. Another miracle of this temple is the water source, which originates from the Garbhagriha below the Linga. The water is believed to have healing qualities. It is hot during the winter season and vice versa during the summer.

Maha Shivaratri and Kartik Purnima are celebrated with enormous devotion. People across the globe flock to this temple on Shivaratri to worship the self-manifested Lingam. The other festivals that would be celebrated grandly are Vijayadashami and Vaikunta Ekadasi. Ganesha Chaturthi is celebrated to praise Lord Ganesha, the son of Lord Shiva. Hanuman Jayanthi is also celebrated in a grand manner.

Maha Nandiswaraswamy Temple is believed to be the house of the living God. He blesses all his devotees abundantly. It is believed that one can get great wisdom and knowledge by worshipping Lord Shiva at this temple. People also pray for getting a good job and securing better marks in the examination. This temple is also frequently visited by people seeking life partners. Lord Shiva will protect his devotees like an amulet and help them to reach newer horizons of success.

How to reach Maha Nandiswaraswamy Temple

The nearest airport to reach the temple is at Hyderabad, which is about 215 km from Kurnool. Buses are available from Hyderabad to Nandyal.